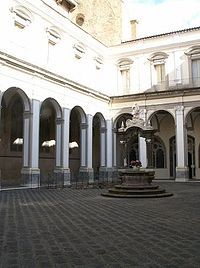 San Lorenzo is a neighbourhood of Naples
Naples
Naples is a city in Southern Italy, situated on the country's west coast by the Gulf of Naples. Lying between two notable volcanic regions, Mount Vesuvius and the Phlegraean Fields, it is the capital of the region of Campania and of the province of Naples...
, southern Italy
Italy
Italy , officially the Italian Republic languages]] under the European Charter for Regional or Minority Languages. In each of these, Italy's official name is as follows:;;;;;;;;), is a unitary parliamentary republic in South-Central Europe. To the north it borders France, Switzerland, Austria and...
. It incorporates the precise geographical center of the ancient Greco-Roman city, centered on the intersection of Via San Gregorio Armeno and Via dei Tribunali.

The modern area is situated over archaeological ruins of considerable interest, some of which may be visited beneath the church of San Lorenzo Maggiore
San Lorenzo Maggiore (Naples)
San Lorenzo Maggiore is a church in Naples, Italy. It is located at the precise geographic center of the historic center of the ancient Greek-Roman city, at the intersection of via San Gregorio Armeno and via dei Tribunali...
. With 49,275 inhabitants on 1.42 km2 (2001 census), 34,701 inhabitants per km², it is the most densely populated neighbourhood of Naples and all Italy.
The source of this article is wikipedia, the free encyclopedia.  The text of this article is licensed under the GFDL.