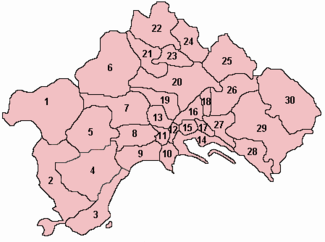 San Giovanni a Teduccio is a coastal suburb in the east of Naples
Naples
Naples is a city in Southern Italy, situated on the country's west coast by the Gulf of Naples. Lying between two notable volcanic regions, Mount Vesuvius and the Phlegraean Fields, it is the capital of the region of Campania and of the province of Naples...
, in southern Italy
Italy
Italy , officially the Italian Republic languages]] under the European Charter for Regional or Minority Languages. In each of these, Italy's official name is as follows:;;;;;;;;), is a unitary parliamentary republic in South-Central Europe. To the north it borders France, Switzerland, Austria and...
.

The area was incorporated into the city of Naples under Fascist rule. The area has been heavily developed since the end of WWII and suffers the same problems of unemployment and crime that afflict much of eastern Naples.

Historically, the area was at the center of early industry in Naples and contains the facility that produced the first railway in Italy, Pietrarsa, now a railway museum.