Samarqand Province was established on January 15, 1938, and is divided into 14 administrative districts. The capital is Samarqand
Samarkand
Although a Persian-speaking region, it was not united politically with Iran most of the times between the disintegration of the Seleucid Empire and the Arab conquest . In the 6th century it was within the domain of the Turkic kingdom of the Göktürks.At the start of the 8th century Samarkand came...
(pop est 368,000 inhabitants). Other major towns include Bulung‘ur, Juma
Juma (town)
Djuma or Dzhuma is a town in the Samarkand province of Uzbekistan. The population is about 65,000 people....
, Ishtixon, Kattaqo‘rg‘on, Urgut
Urgut
Urgut is a town in the Samarqand Province of Uzbekistan and the capital of Urgut District. It is known for the grove of platans, some of which are more than 1000 years old. Urgut is located in mountainous areas....
, and Oqtosh. 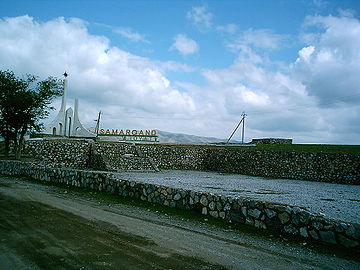 Samarkand is the 2nd largest center for economy, science, and culture in Uzbekistan, after Tashkent
Tashkent
Tashkent is the capital of Uzbekistan and of the Tashkent Province. The officially registered population of the city in 2008 was about 2.2 million. Unofficial sources estimate the actual population may be as much as 4.45 million.-Early Islamic History:...
. The Institute of Archeology at the Academy of Sciences of the Republic of Uzbekistan is based at Samarqand. The Province's UNESCO World Heritage Site architectural monuments are world famous, and make Samarkand the largest center for international tourism
Tourism
Tourism is travel for recreational, leisure or business purposes. The World Tourism Organization defines tourists as people "traveling to and staying in places outside their usual environment for not more than one consecutive year for leisure, business and other purposes".Tourism has become a...
in the country.

Samarqand Province also has significant natural resources
Natural Resources
Natural Resources is a soul album released by Motown girl group Martha Reeves and the Vandellas in 1970 on the Gordy label. The album is significant for the Vietnam War ballad "I Should Be Proud" and the slow jam, "Love Guess Who"...
, including construction materials such as marble
Marble
Marble is a metamorphic rock composed of recrystallized carbonate minerals, most commonly calcite or dolomite.Geologists use the term "marble" to refer to metamorphosed limestone; however stonemasons use the term more broadly to encompass unmetamorphosed limestone.Marble is commonly used for...
, granite
Granite
Granite is a common and widely occurring type of intrusive, felsic, igneous rock. Granite usually has a medium- to coarse-grained texture. Occasionally some individual crystals are larger than the groundmass, in which case the texture is known as porphyritic. A granitic rock with a porphyritic...
, limestone
Limestone
Limestone is a sedimentary rock composed largely of the minerals calcite and aragonite, which are different crystal forms of calcium carbonate . Many limestones are composed from skeletal fragments of marine organisms such as coral or foraminifera....
, carbonate
Carbonate
In chemistry, a carbonate is a salt of carbonic acid, characterized by the presence of the carbonate ion, . The name may also mean an ester of carbonic acid, an organic compound containing the carbonate group C2....
, and chalk
Chalk
Chalk is a soft, white, porous sedimentary rock, a form of limestone composed of the mineral calcite. Calcite is calcium carbonate or CaCO3. It forms under reasonably deep marine conditions from the gradual accumulation of minute calcite plates shed from micro-organisms called coccolithophores....
. The Province's major agricultural activities are cotton
Cotton
Cotton is a soft, fluffy staple fiber that grows in a boll, or protective capsule, around the seeds of cotton plants of the genus Gossypium. The fiber is almost pure cellulose. The botanical purpose of cotton fiber is to aid in seed dispersal....
and cereal growing, winemaking
Winemaking
Winemaking, or vinification, is the production of wine, starting with selection of the grapes or other produce and ending with bottling the finished wine. Although most wine is made from grapes, it may also be made from other fruit or non-toxic plant material...
and sericulture
Sericulture
Sericulture, or silk farming, is the rearing of silkworms for the production of raw silk.Although there are several commercial species of silkworms, Bombyx mori is the most widely used and intensively studied. According to Confucian texts, the discovery of silk production by B...
. In terms of industry, metal processing (spare parts for automobiles and combines), food processing
Food processing
Food processing is the set of methods and techniques used to transform raw ingredients into food or to transform food into other forms for consumption by humans or animals either in the home or by the food processing industry...
, textiles, and ceramics
Pottery
Pottery is the material from which the potteryware is made, of which major types include earthenware, stoneware and porcelain. The place where such wares are made is also called a pottery . Pottery also refers to the art or craft of the potter or the manufacture of pottery...
industries are the most active in the area.

The province has a well-developed transport infrastructure, with over 400 km of railways and 4100 km of surfaced roads. The telecommunication infrastructure is also well developed. 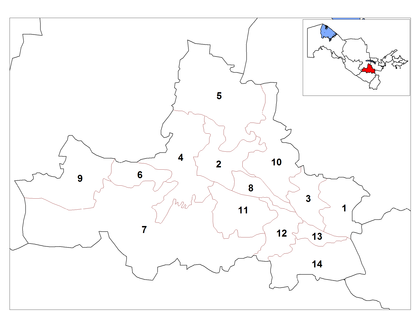