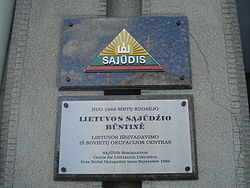 Sąjūdis initially known as the Reform Movement of Lithuania, is the political organization which led the struggle for Lithuania
Lithuania
Lithuania , officially the Republic of Lithuania is a country in Northern Europe, the biggest of the three Baltic states. It is situated along the southeastern shore of the Baltic Sea, whereby to the west lie Sweden and Denmark...
n independence in the late 1980s and early 1990s. It was established on June 3, 1988 and was led by Vytautas Landsbergis
Vytautas Landsbergis
Professor Vytautas Landsbergis is a Lithuanian conservative politician and Member of the European Parliament. He was the first head of state of Lithuania after its independence declaration from the Soviet Union, and served as the Head of the Lithuanian Parliament Seimas...
. Its goal was to seek the return of independent status for Lithuania.

In the mid 1980s, Lithuania's Communist Party leadership hesitated to embrace Gorbachev's perestroika
Perestroika
Perestroika was a political movement within the Communist Party of the Soviet Union during 1980s, widely associated with the Soviet leader Mikhail Gorbachev...
and glasnost
Glasnost
Glasnost was the policy of maximal publicity, openness, and transparency in the activities of all government institutions in the Soviet Union, together with freedom of information, introduced by Mikhail Gorbachev in the second half of the 1980s...
. The death of Petras Griškevičius
Petras Griškevicius
Petras Griškevičius was a high-level communist party official in the Lithuanian SSR. He was the First Secretary of the Lithuanian Communist Party from 1974 to his death.At the beginning of World War II, Griškevičius retreated into the Russian SFSR...
, first secretary of the Communist Party of Lithuania
Communist Party of Lithuania
The Communist Party of Lithuania was a communist party in Lithuania, established in early October 1918. The party was banned in December 1926.-History:...
, in 1987 was merely followed by the appointment of another rigid communist, Ringaudas Songaila. However, encouraged by the rhetoric of Mikhail Gorbachev
Mikhail Gorbachev
Mikhail Sergeyevich Gorbachev is a former Soviet statesman, having served as General Secretary of the Communist Party of the Soviet Union from 1985 until 1991, and as the last head of state of the USSR, having served from 1988 until its dissolution in 1991...
, noting the strengthening position of Solidarity in Poland and encouraged by the Pope and the U.S. Government, Baltic independence activists began to hold public demonstrations in Riga
Riga
Riga is the capital and largest city of Latvia. With 702,891 inhabitants Riga is the largest city of the Baltic states, one of the largest cities in Northern Europe and home to more than one third of Latvia's population. The city is an important seaport and a major industrial, commercial,...
, Tallinn
Tallinn
Tallinn is the capital and largest city of Estonia. It occupies an area of with a population of 414,940. It is situated on the northern coast of the country, on the banks of the Gulf of Finland, south of Helsinki, east of Stockholm and west of Saint Petersburg. Tallinn's Old Town is in the list...
, and Vilnius
Vilnius
Vilnius is the capital of Lithuania, and its largest city, with a population of 560,190 as of 2010. It is the seat of the Vilnius city municipality and of the Vilnius district municipality. It is also the capital of Vilnius County...
.

At a meeting at the Lithuanian Academy of Sciences on June 3, 1988, communist and non-communist intellectuals formed Sąjūdis Initiative Group (Lithuanian: Sąjūdžio iniciatyvinė grupė) to organize a movement to support Gorbachev's program of glasnost, democratization, and perestroika. The group composed of 35 members, mostly artists. 17 of the group members were also communist party members. Its goal was to organize the Sąjūdis Reform Movement, which became known subsequently simply as Sąjūdis.

On June 24, 1988 the first massive gathering organized by Sąjūdis took place. There delegates to the 19th All-Union Conference of the Communist Party of the Soviet Union
Communist Party of the Soviet Union
The Communist Party of the Soviet Union was the only legal, ruling political party in the Soviet Union and one of the largest communist organizations in the world...
were instructed about Sąjūdis goals. About 100,000 people in Vingis Park
Vingis Park
Vingis Park is the largest park in Vilnius, Lithuania. Located at a curve in the Neris River, it covers . It is used as a venue for various events, especially concerts and sports competitions....
greeted the delegates when they came back in July. Another massive event took place on August 23, 1988 when about 250,000 people gathered to protest against the Molotov-Ribbentrop pact
Molotov-Ribbentrop Pact
The Molotov–Ribbentrop Pact, named after the Soviet foreign minister Vyacheslav Molotov and the German foreign minister Joachim von Ribbentrop, was an agreement officially titled the Treaty of Non-Aggression between Germany and the Soviet Union and signed in Moscow in the late hours of 23 August 1939...
and its secret protocol.

On June 19, the first issue of samizdat
Samizdat
Samizdat was a key form of dissident activity across the Soviet bloc in which individuals reproduced censored publications by hand and passed the documents from reader to reader...
newspaper "Sąjūdis News" (Lithuanian: Sąjūdžio žinios) was published. In September Sąjūdis published a legal newspaper, "Atgimimas" (English: rebirth). In total about 150 different newspapers were printed supporting Sąjūdis.

In October 1988 Sąjūdis held its founding conference in Vilnius. It elected 35-member council. Most its members were members of the initiative group. Vytautas Landsbergis
Vytautas Landsbergis
Professor Vytautas Landsbergis is a Lithuanian conservative politician and Member of the European Parliament. He was the first head of state of Lithuania after its independence declaration from the Soviet Union, and served as the Head of the Lithuanian Parliament Seimas...
, a professor of musicology who was not a member of the communist party, became the council's Chairman.

The movement supported Gorbachev's policies, but at the same time promoted Lithuanian national issues such as restoration of the Lithuanian language
Lithuanian language
Lithuanian is the official state language of Lithuania and is recognized as one of the official languages of the European Union. There are about 2.96 million native Lithuanian speakers in Lithuania and about 170,000 abroad. Lithuanian is a Baltic language, closely related to Latvian, although they...
as the official language. Its demands included the revelation of truth about the Stalinist years, protection of the environment, the halt to construction on a third nuclear reactor at the Ignalina nuclear power plant
Ignalina Nuclear Power Plant
The Ignalina Nuclear Power Plant is a closed two-unit RBMK-1500 nuclear power station in Visaginas, Lithuania. It was named after the nearby city of Ignalina...
, and disclosure of the secret protocols of the Nazi-Soviet Non-aggression Pact, signed in 1939.

Sąjūdis used mass meetings to advance its goals. At first, Communist Party leaders shunned these meetings, but by mid-1988 their participation became a political necessity. A Sąjūdis rally on June 24, 1988, was attended by Algirdas Brazauskas
Algirdas Brazauskas
Algirdas Mykolas Brazauskas was the first President of a newly independent post-Soviet Union Lithuania from 1993 to 1998 and Prime Minister from 2001 to 2006....
, then party secretary for industrial affairs. In October 1988, Brazauskas was appointed first secretary of the communist party to replace Songaila. Communist leaders threatened to crack down on Sąjūdis, but backed down in the face of mass protests. Sąjūdis candidates fared well in elections to the Congress of People's Deputies, the newly created Soviet legislative body. Their candidates won in 36 of the 40 districts in which they ran.

In February 1989, Sąjūdis declared that Lithuania had been forcibly annexed by the Soviet Union and that the group's ultimate goal was to achieve independence. Lithuanian sovereignty was proclaimed in May 1989, and Lithuania's incorporation into the Soviet Union was declared illegal.

On 23 August 1989, the 50th Anniversary of the signing of the Nazi-Soviet Molotov-Ribbentrop Pact
Molotov-Ribbentrop Pact
The Molotov–Ribbentrop Pact, named after the Soviet foreign minister Vyacheslav Molotov and the German foreign minister Joachim von Ribbentrop, was an agreement officially titled the Treaty of Non-Aggression between Germany and the Soviet Union and signed in Moscow in the late hours of 23 August 1939...
, a 600-kilometre two million strong human chain reaching from Tallinn to Vilnius focused international attention on the aspirations of the Baltic nations. This demonstration and the coordinated efforts of the three nations became known as The Baltic Way
Baltic Way
The Baltic Way or Baltic Chain was a peaceful political demonstration that occurred on August 23, 1989. Approximately two million people joined their hands to form a human chain spanning over across the three Baltic states – Estonian SSR, Latvian SSR, and Lithuanian SSR, republics of the Soviet...
.

In December, the Communist Party of Lithuania seceded from the Communist Party of the Soviet Union and agreed to give up its monopoly on power. In February 1990, Sąjūdis representatives won an absolute majority (101 seats out of 141) in the Supreme Council of the Lithuanian SSR. Vytautas Landsbergis was elected Chairman of the Supreme Council. This led to the declaration of independence on March 11, 1990.

Today, Sąjūdis is still active in Lithuania
Lithuania
Lithuania , officially the Republic of Lithuania is a country in Northern Europe, the biggest of the three Baltic states. It is situated along the southeastern shore of the Baltic Sea, whereby to the west lie Sweden and Denmark...
, but it has lost almost all its influence. The popularity of Sąjūdis lessened as it failed to maintain unity among people with different political beliefs and was ineffective coping with the economic crisis. The Democratic Labour Party
Democratic Labour Party of Lithuania
Democratic Labour Party of Lithuania was a social democratic political party in Lithuania, that emerged out of the Lithuanian section of the CPSU in December 1989 LDDP was led by Algirdas Brazauskas, the first president of independent Lithuania. Because Brazauskas was elected as the first...
(DLP; the former Communist Party of Lithuania) was victorious in the Seimas
Seimas
The Seimas is the unicameral Lithuanian parliament. It has 141 members that are elected for a four-year term. About half of the members of this legislative body are elected in individual constituencies , and the other half are elected by nationwide vote according to proportional representation...
elections of November 1992.