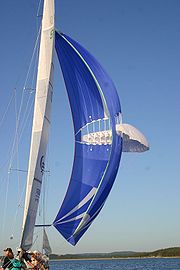 Sail twist is a phenomenon in sailing
Sailing
Sailing is the propulsion of a vehicle and the control of its movement with large foils called sails. By changing the rigging, rudder, and sometimes the keel or centre board, a sailor manages the force of the wind on the sails in order to move the boat relative to its surrounding medium and...
where the head of the sail
Sail
A sail is any type of surface intended to move a vessel, vehicle or rotor by being placed in a wind—in essence a propulsion wing. Sails are used in sailing.-History of sails:...
is at a different angle of incidence
Angle of incidence
Angle of incidence is a measure of deviation of something from "straight on", for example:* in the approach of a ray to a surface, or* the angle at which the wing or horizontal tail of an airplane is installed on the fuselage, measured relative to the axis of the fuselage.-Optics:In geometric...
from the foot of the sail in order to change the lift distribution with height. Twist is measured by comparing the angle of a straight line between the leading edge (luff) and trailing edge (leech) with that of the boom
Boom (sailing)
In sailing, a boom is a spar , along the foot of a fore and aft rigged sail, that greatly improves control of the angle and shape of the sail. The primary action of the boom is to keep the foot of the sail flatter when the sail angle is away from the centerline of the boat. The boom also serves...
. Some twist is desirable, but too much can induce weather helm
Weather helm
Weather helm is the tendency of sailing vessels to turn towards the source of wind, creating an unbalanced helm that requires pulling the tiller to windward in order to counteract the effect. Weather helm is the opposite of Lee Helm....
or ruin the slot between the mainsail
Mainsail
A mainsail is a sail located behind the main mast of a sailing vessel.On a square rigged vessel, it is the lowest and largest sail on the main mast....
and jib
Jib
A jib is a triangular staysail set ahead of the foremast of a sailing vessel. Its tack is fixed to the bowsprit, to the bow, or to the deck between the bowsprit and the foremost mast...
.

Three sail shape controls which control the leech tension, and therefore sail twist, are the mainsheet, the boom vang
Boom vang
A boom vang or kicking strap is a line or piston system on a sailboat used to exert downward force on the boom and thus control the shape of the sail. An older term is "martingale"....
and the traveler
Mechanical traveller
A mechanical traveller is a moving part of a machine, typically a ring that slides between different positions on a supporting rod when the machine goes through its operating cycle. The term may also be used refer to the supporting rod....
. The mainsheet pulls the boom (and therefore the foot of the sail) primarily inwards at lower points of sail and downwards at higher points of sail. Manipulation of the traveler can counteract this because it always pulls the boom laterally. The vang on the other hand does the opposite, it always changes the height of the boom.

Computer cut sails can produce the amount of twist specified by the sailmaker
Sailmaker
A sailmaker makes and repairs sails for sailboats, kites, hang gliders, wind art, architectural sails, or other structures using sails. A sailmaker typically works on shore in a sail loft. The sail loft has other sailmakers. Large ocean-going sailing ships often had sailmakers in the crew. The...
, and in different conditions, different amounts of twist may be desirable. Less twist is generally desirable in light air conditions and slackening the luff tension will tighten the leech of the sail. This moves the center of effort on the sail toward the trailing edge and reduces twist thus making the sail more powerful but vulnerable to stalling.
The source of this article is wikipedia, the free encyclopedia.  The text of this article is licensed under the GFDL.