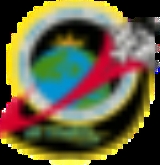 Intelsat VI (F-3) satellite, stranded in an unusable orbit since launch aboard a Titan vehicle in March 1990, was captured by crewmembers during an EVA (extra-vehicular activity
Extra-vehicular activity
Extra-vehicular activity is work done by an astronaut away from the Earth, and outside of a spacecraft. The term most commonly applies to an EVA made outside a craft orbiting Earth , but also applies to an EVA made on the surface of the Moon...
) and equipped with a new perigee kick motor. The Satellite was subsequently released into orbit and the new motor fired to put the spacecraft into a geosynchronous orbit for operational use. 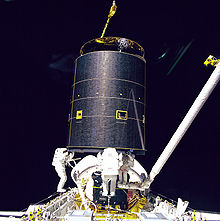 The capture required three EVAs: a planned one by astronaut Thuot and Hieb who were unable to attach a capture bar to the satellite from a position on the RMS; a second unscheduled but identical attempt the following day; and finally an unscheduled but successful hand capture by Thuot, Hieb and Akers as commander Brandenstein delicately maneuvered the orbiter to within a few feet of the 4215 kg
Kilogram
The kilogram or kilogramme , also known as the kilo, is the base unit of mass in the International System of Units and is defined as being equal to the mass of the International Prototype Kilogram , which is almost exactly equal to the mass of one liter of water...
communications satellite. An Assembly of Station by EVA Methods (ASEM) structure was erected in the cargo bay by the crew to serve as a platform to aid in the hand capture and subsequent attachment of the capture bar.

A planned EVA also was performed by astronauts Thornton and Akers as part of the ASEM experiment to demonstrate and verify maintenance and assembly capabilities for Space Station Freedom. The ASEM space walk, originally scheduled for two successive days, was cut to one day because of the lengthy Intelsat retrieval operation.

The following records were set during the STS-49 mission: