Building on the successful experience of the earlier TGS
TGS
- Educational establishments :* The Graduate School at Northwestern University* Tadcaster Grammar School, a secondary school in North Yorkshire, England* Takapuna Grammar School, Auckland, New Zealand* Toowoomba Grammar School, Toowoomba, Australia...
and the ETG turbotrains, French state railway company SNCF
SNCF
The SNCF , is France's national state-owned railway company. SNCF operates the country's national rail services, including the TGV, France's high-speed rail network...
commissioned the T 2000 for entry into service in the early 1970s. The objective was to offer the same service speed as electric traction (160 km/h at the time) on French trunk lines that had yet to be electrified.

T 2000s were equipped with two 775 kW Turboméca
Turbomeca
Turbomeca is a French manufacturer of low- and medium-power gas turbine turboshaft engines for helicopters. The company also produces gas turbine engines for aircraft and missiles, as well as turbines for land, industrial and marine applications...
Turmo III turbines which drove Voith Hydraulic Transmissions at each end and two auxiliary 300 kW Turboméca Astazou
Turbomeca Astazou
|-References:...
turbines to power air conditioning and lighting. They were aesthetically similar to the T 1000s, sharing in particular the same driving cabin, yet were built on a longer chassis and featured five passenger cars instead of the T 1000's three. Also, the paint scheme was different and closely resembled a reversal of the T 1000's. Each turboengine was equipped with a 3500 litre diesel tank for use on long routes, with a consumption of 430 litres per hour for traction and 150 litres per hour for passenger comfort. Electropneumatic braking was performed by cast-iron shoe-and-disc brakes, with electromagnetic track brakes under each bogey
Bogey
Bogey or Bogie may refer to:* Bogeyman, boogeyman, boogyman, or bogyman, a legendary ghost-like monster with no specific appearance** Boggart, a mischievous household spirit** Bogle, a ghost in Scottish or northern English folklore...
for emergency braking. 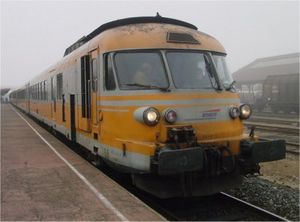 The first trains were put into service in late 1972 on the Lyon
Gare de Lyon-Perrache
Gare de Lyon-Perrache station is a large railway station in the quarter Perrache, in the 2nd arrondissement of Lyon, France. It is situated on the Paris–Marseille railway, and it is the western terminus of the Lyon–Geneva railway and the southeastern terminus of the Moret–Lyon railway. It was built...
-Strasbourg
Gare de Strasbourg
Gare de Strasbourg is a rail station in the commune of Strasbourg, in Bas-Rhin, France. It is the eastern terminus of the Paris–Strasbourg railway.- Services :The station is the main station in Strasbourg and one of the main stations in the east of France....
and Nantes
Gare de Nantes
The Gare de Nantes is the principal passenger railway station serving the French city of Nantes. It is a through station aligned east-west, with entrances and station facilities on both north and south sides...
-Bordeaux
Gare de Bordeaux Saint-Jean
Bordeaux-Saint-Jean or Bordeaux-Midi is the main railway station in the French city of Bordeaux. It is the southern terminus of the Paris–Bordeaux railway, and the western terminus of the Chemin de Fer du Midi main line to Toulouse. The current station building opened in 1898. As well as Midi...
routes, two key trunk lines that were not electrified at the time. Though the trainsets were rated for 160 km/h, they only could achieve this speed on short sections due to the ancient design of the lines (particularly on the Nantes-Bordeaux route) that restricted speed to 120 km/h on many segments. As the capacity of the smaller T1000s serving the Western line from Paris-Saint-Lazare
Gare Saint-Lazare
Paris Saint-Lazare is one of the six large terminus train stations of Paris. It is the second busiest in Paris, behind the Gare du Nord, handling 274,000 passengers each day.-History:...
to Caen
Gare de Caen
Caen, Gare de l'Ouest or Gare Calvados, is the main and now only station serving the city of Caen. The station stands on the main line from Paris to Cherbourg and although it mainly is an intercity station many regional trains use the station. Typical services link Caen to Lisieux, Evreux, Paris,...
and Cherbourg
Gare de Cherbourg
Gare de Cherbourg is the railway station of the city of Cherbourg, France. It is the western terminus of the Mantes-la-Jolie–Cherbourg railway....
was proving less and less adequate, the next batch of T 2000s was affected to this line whose straighter profile allowed them at last to demonstrate superb performance and reliability.

The 1973 oil crisis and France's decision to invest heavily in nuclear power
Nuclear power
Nuclear power is the use of sustained nuclear fission to generate heat and electricity. Nuclear power plants provide about 6% of the world's energy and 13–14% of the world's electricity, with the U.S., France, and Japan together accounting for about 50% of nuclear generated electricity...
caused SNCF
SNCF
The SNCF , is France's national state-owned railway company. SNCF operates the country's national rail services, including the TGV, France's high-speed rail network...
to sharply redirect its focus towards electric traction and put a stop to new orders of T 2000s, ending production at thirteen sets. With rail traffic steadily increasing, the capacity of T 2000s became insufficient at peak times even when coupled in pairs, so a sixth passenger car was added to all trainsets between 1978 and 1981. The second oil crisis, in 1979, prompted the refitting of T 2000s with more fuel-efficient Turmo XII turbines which also offered a power increase from 775 to 1150 kW. Unlike T 1000s, the T 2000s' control equipment was also modified so that a coupled set could be operated by a single engineer. Around that time, T 2000 service on the Nantes-Bordeaux line stopped and T 2000s were reallocated to the Lyon-Nantes route, an unelectrified trunk line with severe gradients where turbine traction could once again demonstrate its potential.

With the electrification of the Lyon-Strasbourg (1995) and Paris-Caen-Cherbourg routes (June 1996) and the switch to regular Diesel Electric locomotive hauled traction on the Lyon-Nantes route (BB 67400
SNCF Class BB 67400
The SNCF Class BB 67400 diesel locomotives were built by Brissonneau and Lotz between 1969-1975. They can be found working all over France on both freight and passenger trains....
and CC 72000 power cars), the future of the T 2000 became bleak in the 1990s. It remained unrivaled on the Lyon-Bordeaux route, where four reversals are required and the T 2000's double-ended cabs avoided the considerable time involved to switch the locomotive from one end of the train to the other. As trainsets neared the end of their life span, the fleet was reduced down to ten sets and was equipped with train-to-ground radio. Hybrid trains were eventually formed with engines from different sets to lengthen their lifespan, and the dwindling fleet (six sets in 2003, four in 2004) was finally retired at the end of 2004. With Diesel locomotives less able to maintain speed on the line's steep gradients and requiring four reversals, the direct journey from Lyon to Bordeaux has since then been lengthened from 7 hours 30 minutes to 9 hours.

In addition to the SNCF units, ANF built 6 very similar Turboliner
Turboliner
The Amtrak Turboliners are gas turbine trainsets built for Amtrak. The trains were powered by gas turbine engines and ran on diesel fuel. Some were equipped with third rail shoes to enable entry into the underground tunnels approaching Grand Central Terminal and New York Penn Station in New York...
s for Amtrak
Amtrak
The National Railroad Passenger Corporation, doing business as Amtrak , is a government-owned corporation that was organized on May 1, 1971, to provide intercity passenger train service in the United States. "Amtrak" is a portmanteau of the words "America" and "track". It is headquartered at Union...
.

One power car, number T 2057, has been preserved at the French National Railway Museum
Musée Français du Chemin de Fer
The Cité du train , the French national railway museum is the biggest railway museum in the world, this one being situated in Mulhouse...
. 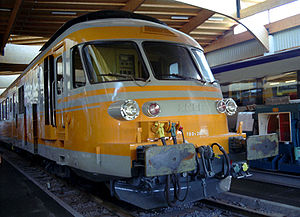