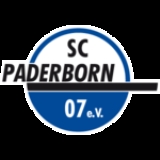 Encyclopedia
SC Paderborn 07 is a German association football club
Football in Germany
Association football is the most popular sport in Germany. The German Football Association is the sport's national governing body, with 6.6 million members organized in over 26,000 football clubs. There is a league system, with the 1. and 2. Bundesliga on top, and the winner of the first...
based in Paderborn
Paderborn
Paderborn is a city in North Rhine-Westphalia, Germany, capital of the Paderborn district. The name of the city derives from the river Pader, which originates in more than 200 springs near Paderborn Cathedral, where St. Liborius is buried.-History:...
, North Rhine-Westphalia
North Rhine-Westphalia
North Rhine-Westphalia is the most populous state of Germany, with four of the country's ten largest cities. The state was formed in 1946 as a merger of the northern Rhineland and Westphalia, both formerly part of Prussia. Its capital is Düsseldorf. The state is currently run by a coalition of the...
, currently playing in the 2. Bundesliga
2. Fußball-Bundesliga
- Changes in division set-up :* Number of clubs: currently 18. From 1974 to 1981 there were two conferences, each of 20 teams. In 1981–91 it had 20...
.

The club was formed out of the 1985 merger of FC Paderborn and TuS Schloß Neuhaus as TuS Paderborn-Neuhaus and took on its current, shorter name in 1997. The Neuhaus club was founded in 1907 as SV 07 Neuhaus which was joined by the local side TuS 1910 Sennelager to become TuS Schloss Neuhaus in 1970. The Neuhaus and Paderborn teams played as tier III sides for most of their histories, as has the unified club. Today Paderborn plays its home matches at the Energie Team Arena.

The club is known for its involvement in a notorious DFB-Pokal
DFB-Pokal
The DFB-Pokal or DFB Cup is a German knockout football cup competition held annually. 64 teams participate in the competition, including all clubs from the Bundesliga and the 2nd Bundesliga. It is considered the second most important national title in German football after the Bundesliga...
contest played against Bundesliga
Fußball-Bundesliga
The Fußball-Bundesliga is a professional association football league in Germany. At the top of Germany's football league system, it is the country's primary football competition. It is contested by 18 teams and operates on a system of promotion and relegation with the 2. Bundesliga...
side Hamburger SV
Hamburger SV
Hamburger Sport-Verein, usually referred to as HSV in Germany and Hamburg in international parlance, is a German multi-sport club based in Hamburg, its largest branch being its football department...
on 21 August 2004. Paderborn upset HSV 4–2 and it was revealed in January 2005 that the match referee, Robert Hoyzer
Robert Hoyzer
Robert Hoyzer is a retired German football referee, who scandalized German football by fixing matches in the Bundesliga scandal of 2005.-Early life:...
, had taken money from Croatia
Croatia
Croatia , officially the Republic of Croatia , is a unitary democratic parliamentary republic in Europe at the crossroads of the Mitteleuropa, the Balkans, and the Mediterranean. Its capital and largest city is Zagreb. The country is divided into 20 counties and the city of Zagreb. Croatia covers ...
n gambling syndicates to fix the match
Match fixing
In organised sports, match fixing, game fixing, race fixing, or sports fixing occurs as a match is played to a completely or partially pre-determined result, violating the rules of the game and often the law. Where the sporting competition in question is a race then the incident is referred to as...
using two wrongly awarded penalties and a questionable red card. It soon developed that the game was only one of a number in which game officials, coaches, and players accepted payment to influence the outcome. The resulting scandal
2005 Bundesliga scandal
In early 2005, German football was overshadowed by the discovery of a €2 million match fixing scandal centered on second division referee Robert Hoyzer, who confessed to fixing and betting on matches in the 2nd Bundesliga, the DFB-Pokal , and the third division Regionalliga...
was to become the biggest in German football in over thirty years, and was a major embarrassment to the country during its preparations to host the 2006 FIFA World Cup
2006 FIFA World Cup
The 2006 FIFA World Cup was the 18th FIFA World Cup, the quadrennial international football world championship tournament. It was held from 9 June to 9 July 2006 in Germany, which won the right to host the event in July 2000. Teams representing 198 national football associations from all six...
.