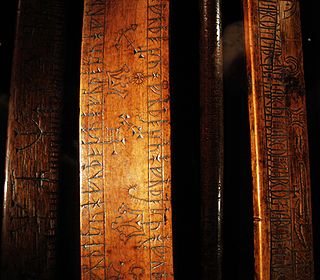 A Runic calendar is a perpetual calendar
Perpetual calendar
A perpetual calendar is a calendar which is good for a span of many years, such as the Runic calendar.- General information :...
based on the 19 year long Metonic cycle
Metonic cycle
In astronomy and calendar studies, the Metonic cycle or Enneadecaeteris is a period of very close to 19 years which is remarkable for being very nearly a common multiple of the solar year and the synodic month...
of the Moon. Runic calendars were written on parchment
Parchment
Parchment is a thin material made from calfskin, sheepskin or goatskin, often split. Its most common use was as a material for writing on, for documents, notes, or the pages of a book, codex or manuscript. It is distinct from leather in that parchment is limed but not tanned; therefore, it is very...
or carved onto staves of wood, bone, or horn. The oldest one known, and the only one from the Middle Ages
Middle Ages
The Middle Ages is a periodization of European history from the 5th century to the 15th century. The Middle Ages follows the fall of the Western Roman Empire in 476 and precedes the Early Modern Era. It is the middle period of a three-period division of Western history: Classic, Medieval and Modern...
, is the Nyköping
Nyköping
Nyköping is a locality and the seat of Nyköping Municipality, Södermanland County, Sweden with 32,427 inhabitants in 2005. The city is also the capital of Södermanland County.- History :...
staff, believed to date from the 13th century. Most of the several thousand which survive are wooden calendars dating from the 16th and the 17th centuries. During the 18th century, the Runic calendars had a renaissance, and around 1800, such calendars were made in the form of tobacco boxes in brass.

A typical Runic calendar consisted of several horizontal lines of symbols, one above the other.

Special days like solstices, equinoxes, and celebrations (including Christian
Christian
A Christian is a person who adheres to Christianity, an Abrahamic, monotheistic religion based on the life and teachings of Jesus of Nazareth as recorded in the Canonical gospels and the letters of the New Testament...
holidays and feasts) were marked with additional lines of symbols.

The calendar does not rely on knowledge of the length of the tropical year
Tropical year
A tropical year , for general purposes, is the length of time that the Sun takes to return to the same position in the cycle of seasons, as seen from Earth; for example, the time from vernal equinox to vernal equinox, or from summer solstice to summer solstice...
or of the occurrence of leap year
Leap year
A leap year is a year containing one extra day in order to keep the calendar year synchronized with the astronomical or seasonal year...
s. It is set at the beginning of each year by observing the first full moon
Full moon
Full moon lunar phase that occurs when the Moon is on the opposite side of the Earth from the Sun. More precisely, a full moon occurs when the geocentric apparent longitudes of the Sun and Moon differ by 180 degrees; the Moon is then in opposition with the Sun.Lunar eclipses can only occur at...
after the winter solstice
Winter solstice
Winter solstice may refer to:* Winter solstice, astronomical event* Winter Solstice , former band* Winter Solstice: North , seasonal songs* Winter Solstice , 2005 American film...
. The first full moon also marked the date of Disting
Disting
The Disting is an annual market which is held in Uppsala, Sweden, since pre-historic times. The name originally referred to the great assembly called the Thing of all Swedes, and it is derived from the fact that both the market and the thing were held in conjunction with the Dísablót, the great...
, a pagan feast and a fair
Fair
A fair or fayre is a gathering of people to display or trade produce or other goods, to parade or display animals and often to enjoy associated carnival or funfair entertainment. It is normally of the essence of a fair that it is temporary; some last only an afternoon while others may ten weeks. ...
day.

On another, many of the days were marked with one of 19 symbols representing the 19 Golden numbers
Golden numbers
A golden number is a number assigned to each year in sequence to indicate the year's position in a 19-year Metonic cycle. They are used in the computus and also in the Runic calendar. The golden number of any Julian or Gregorian calendar year can be calculated by dividing the year by 19, taking...
, the years of the Metonic cycle
Metonic cycle
In astronomy and calendar studies, the Metonic cycle or Enneadecaeteris is a period of very close to 19 years which is remarkable for being very nearly a common multiple of the solar year and the synodic month...
. In early calendars, each of the 19 years in the cycle was represented by a rune; the first 16 were the 16 runes of the Younger Futhark
Younger Futhark
The Younger Futhark, also called Scandinavian runes, is a runic alphabet, a reduced form of the Elder Futhark, consisting of only 16 characters, in use from ca. 800 CE...
, plus special runes for the remaining three years: Arlaug (Golden Number 17), Tvimadur (Golden Number 18), and Belgthor (Golden Number 19). The new moon would fall on that day during that year of the cycle. For example, in the 18th year of the cycle, the new moons would fall on all the dates marked with Tvimadur, the symbol for year 18. Later calendars used Pentadic numerals for the values 1–19.

Because this system needed 19 runes to represent the 19 golden numbers
Golden numbers
A golden number is a number assigned to each year in sequence to indicate the year's position in a 19-year Metonic cycle. They are used in the computus and also in the Runic calendar. The golden number of any Julian or Gregorian calendar year can be calculated by dividing the year by 19, taking...
which stood for the 19 years of the perpetual calendar's cycle, the Younger Futhark
Younger Futhark
The Younger Futhark, also called Scandinavian runes, is a runic alphabet, a reduced form of the Elder Futhark, consisting of only 16 characters, in use from ca. 800 CE...
, a Runic alphabet
Runic alphabet
The runic alphabets are a set of related alphabets using letters known as runes to write various Germanic languages before the adoption of the Latin alphabet and for specialized purposes thereafter...
, was insufficient, having only 16 characters. The solution devised was to add three special runes to represent the numbers above 16: Arlaug (Golden Number 17), Tvimadur (tvímaður, Golden Number 18), and Belgthor (Golden Number 19).

Adherents of the Estonia
Estonia
Estonia , officially the Republic of Estonia , is a state in the Baltic region of Northern Europe. It is bordered to the north by the Gulf of Finland, to the west by the Baltic Sea, to the south by Latvia , and to the east by Lake Peipsi and the Russian Federation . Across the Baltic Sea lies...
n ethnic religion (maausk) have published Runic calendars (Estonian
Estonian language
Estonian is the official language of Estonia, spoken by about 1.1 million people in Estonia and tens of thousands in various émigré communities...
: sirvilauad) every year since 1978. During the Soviet
Soviet Union
The Soviet Union , officially the Union of Soviet Socialist Republics , was a constitutionally socialist state that existed in Eurasia between 1922 and 1991....
occupation, it was an illegal samizdat
Samizdat
Samizdat was a key form of dissident activity across the Soviet bloc in which individuals reproduced censored publications by hand and passed the documents from reader to reader...
publication.