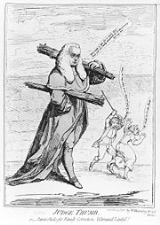 Encyclopedia
A rule of thumb is a principle
Principle
A principle is a law or rule that has to be, or usually is to be followed, or can be desirably followed, or is an inevitable consequence of something, such as the laws observed in nature or the way that a system is constructed...
with broad application that is not intended to be strictly accurate or reliable for every situation. It is an easily learned and easily applied procedure for approximately calculating or recalling some value, or for making some determination. Compare this to heuristic
Heuristic
Heuristic refers to experience-based techniques for problem solving, learning, and discovery. Heuristic methods are used to speed up the process of finding a satisfactory solution, where an exhaustive search is impractical...
, a similar concept used in mathematical discourse
Mathematics
Mathematics is the study of quantity, space, structure, and change. Mathematicians seek out patterns and formulate new conjectures. Mathematicians resolve the truth or falsity of conjectures by mathematical proofs, which are arguments sufficient to convince other mathematicians of their validity...
, psychology
Psychology
Psychology is the study of the mind and behavior. Its immediate goal is to understand individuals and groups by both establishing general principles and researching specific cases. For many, the ultimate goal of psychology is to benefit society...
and computer science
Computer science
Computer science or computing science is the study of the theoretical foundations of information and computation and of practical techniques for their implementation and application in computer systems...
, particularly in algorithm
Algorithm
In mathematics and computer science, an algorithm is an effective method expressed as a finite list of well-defined instructions for calculating a function. Algorithms are used for calculation, data processing, and automated reasoning...
design.


Origin of the phrase

The exact origin of the phrase is uncertain: Either it is derived from the use of the thumb as a measurement device ("rule
Ruler
A ruler, sometimes called a rule or line gauge, is an instrument used in geometry, technical drawing, printing and engineering/building to measure distances and/or to rule straight lines...
") or it is derived from use of the thumb in a number of apocryphal "rules
Law
Law is a system of rules and guidelines which are enforced through social institutions to govern behavior, wherever possible. It shapes politics, economics and society in numerous ways and serves as a social mediator of relations between people. Contract law regulates everything from buying a bus...
" (law, principle, regulation, or maxim). Many claim that it comes from beer brewing before the invention of thermometers, when brewers would use their thumbs to measure the temperature of batches of beer. The earliest citation comes from Sir William Hope’s The Compleat Fencing-Master, second edition, 1692, page 157: "What he doth, he doth by rule of thumb, and not by art." The phrase also exists in other languages, for example Swedish tumregel, Norwegian and Danish tommelfingerregel, sometimes in the variant "rule of fist", for example Finnish nyrkkisääntö, German Faustregel or Dutch vuistregel, as well as in Persian "قاعده سرانگشتی," which is translated as finger's top rule. This suggests that it has some antiquity, and does not originate in specifically English-language culture.

The term is thought to originate with wood workers who used the width of their thumbs (i.e., inches) rather than rulers for measuring things, cementing its modern use as an imprecise yet reliable and convenient standard. This sense of thumb as a unit of measure also appears in Dutch
Dutch language
Dutch is a West Germanic language and the native language of the majority of the population of the Netherlands, Belgium, and Suriname, the three member states of the Dutch Language Union. Most speakers live in the European Union, where it is a first language for about 23 million and a second...
, in which the word for thumb, duim, also means inch. The use of a single word or cognate for "inch" and "thumb" is common in many other Indo-European languages
Indo-European languages
The Indo-European languages are a family of several hundred related languages and dialects, including most major current languages of Europe, the Iranian plateau, and South Asia and also historically predominant in Anatolia...
, for example, inch/thumb; inch/thumb; inch, pulgar thumb; inch, polegar thumb; inch, tumme thumb; inch, anguli finger; , inch/thumb, inch/thumb.

Another possible origin of the phrase comes from measurement, in particular in agricultural fields. The plants need a fairly precise depth to seed properly, whether planted from seed or being replanted, but the depth can sometimes be estimated using the thumb. That is, a rule "(measurement) of thumb." According to Gary Martin, "The origin of the phrase remains unknown. It is likely that it refers to one of the numerous ways that thumbs have been used to estimate things—judging the alignment or distance of an object by holding the thumb in one's eye-line, the temperature of brews of beer, measurement of an inch from the joint to the nail to the tip, or across the thumb, etc. The phrase joins the whole nine yards
The Whole Nine Yards
The phrase the whole nine yards means completely, the whole thing, everything, e.g. I was mugged. They took my wallet, my keys, my shoes, – the whole nine yards! The origin of the phrase has been described as, "the most prominent etymological riddle of our time." The earliest known examples of...
as one that probably derives from some form of measurement but which is unlikely ever to be definitively pinned down."

Another theory is that the coarseness of ground flour produced by windmill
Windmill
A windmill is a machine which converts the energy of wind into rotational energy by means of vanes called sails or blades. Originally windmills were developed for milling grain for food production. In the course of history the windmill was adapted to many other industrial uses. An important...
s in England was assessed by the miller rubbing it between his thumb and forefinger. 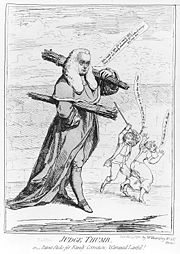 It is often claimed that the term originally referred to a law that limited the maximum thickness of a stick with which it was permissible for a man to beat his wife
Domestic violence
Domestic violence, also known as domestic abuse, spousal abuse, battering, family violence, and intimate partner violence , is broadly defined as a pattern of abusive behaviors by one or both partners in an intimate relationship such as marriage, dating, family, or cohabitation...
. British common law
Common law
Common law is law developed by judges through decisions of courts and similar tribunals rather than through legislative statutes or executive branch action...
before the reign of Charles II
Charles II of England
Charles II was monarch of the three kingdoms of England, Scotland, and Ireland.Charles II's father, King Charles I, was executed at Whitehall on 30 January 1649, at the climax of the English Civil War...
permitted a man to give his wife "moderate correction", but no "rule of thumb" (whether called by this name or not) has ever been the law in
England. Such "moderate correction" specifically excluded beatings, allowing the husband only to confine a wife to the household.

Nonetheless, belief in the existence of a "rule of thumb" law to excuse spousal abuse can be traced as far back as 1782, the year that James Gillray
James Gillray
James Gillray , was a British caricaturist and printmaker famous for his etched political and social satires, mainly published between 1792 and 1810.- Early life :He was born in Chelsea...
published his satirical cartoon Judge Thumb. The cartoon lambastes Sir Francis Buller
Sir Francis Buller, 1st Baronet
Sir Francis Buller, 1st Baronet was an English judge.-Life:Buller was born at Downes House in Devon, the son of James Buller, Member of Parliament for Cornwall, and his wife Lady Jane, daughter of Allen Bathurst, 1st Earl Bathurst. He was educated at the King's School, Ottery St Mary, and...
, a British judge, for, it is alleged, ruling that a man may legally beat his wife, provided that he used a stick no thicker than his thumb, although it is questionable whether Buller ever made such a pronouncement (poor record-keeping for trial transcripts in that era makes it difficult to determine whether such a ruling may have existed). The Body of Liberties adopted in 1641 by the Massachusetts Bay colonists states, “Every married woman shall be free from bodily correction or stripes by her husband, unless it be in his own defense from her assault.” In the United States, legal decisions in Mississippi (1824) and North Carolina (1868 and 1874) make reference to—and reject—an unnamed "old doctrine" or "ancient law" by which a man was allowed to beat his wife with a stick no wider than his thumb.
For example, the 1874 case State v. Oliver (North Carolina Reports, Vol. 70, Sec. 60, p. 44) states: "We assume that the old doctrine that a husband had the right to whip his wife, provided that he used a switch no larger than his thumb, is not the law in North Carolina."
In 1976, feminist Del Martin used the phrase "rule of thumb" as a metaphorical reference to describe such a doctrine. She was misinterpreted by many as claiming the doctrine as a direct origin of the phrase and the connection gained currency in 1982, when the U.S. Commission on Civil Rights issued a report on wife abuse, titled "Under the Rule of Thumb."

There is a persistent urban legend claiming that the term derives from English common law which permits a husband to beat his wife with a stick no bigger than his thumb. This is a false etymology; although there have been judges who expressed their opinions that such an act would be permissible, there is no evidence of any laws stating it or that this phrase was derived from them .


The first Composers of Pipe Music having never heard of any other Instrument or known any of the Rules ever invented of Musick ... it may not be improper to discover the general rule by which they Taught & regulated their Time (having neither of Common or Triple Time, Crotchet or Quaver) but only their Ear to which they must only trust. This Rule we may more properly Call The Rule of Thumb. In effect it is Much the same, for it was by the four Fingers of the Left hand that all their Time was measurd & regulated E.G An Adagio in Common Time of Such a Style must not exceed or fall short [of] Such a number of Fingers, otherwise it was not regular. If the March was to be but a short Composition, the Ground must be of So many fingers; for Bars they had no notion of; if a Gathering, commonly of Such a Number, If a Lament, If a March, & c. according to the Occasion it must Consist of Such a Number.