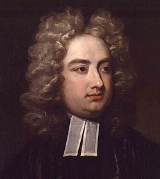 Overview
Jonathan Swift was an Irish
Irish
Irish may refer to:*Irish cuisine* Ireland, an island in north-western Europe, on which are located:** Northern Ireland, a constituent country of the United Kingdom** Republic of Ireland, a sovereign state...
satirist
Satire
Satire is primarily a literary genre or form, although in practice it can also be found in the graphic and performing arts. In satire, vices, follies, abuses, and shortcomings are held up to ridicule, ideally with the intent of shaming individuals, and society itself, into improvement...
, essay
Essay
An essay is a piece of writing which is often written from an author's personal point of view. Essays can consist of a number of elements, including: literary criticism, political manifestos, learned arguments, observations of daily life, recollections, and reflections of the author. The definition...
ist, political pamphleteer
Pamphleteer
A pamphleteer is a historical term for someone who creates or distributes pamphlets. Pamphlets were used to broadcast the writer's opinions on an issue, for example, in order to get people to vote for their favorite politician or to articulate a particular political ideology.A famous pamphleteer...
(first for the Whigs, then for the Tories), poet and cleric who became Dean of St. Patrick's Cathedral, Dublin
St. Patrick's Cathedral, Dublin
Saint Patrick's Cathedral , or more formally, the Cathedral of the Blessed Virgin Mary and St Patrick is a cathedral of the Church of Ireland in Dublin, Ireland which was founded in 1191. The Church has designated it as The National Cathedral of Ireland...
.

He is remembered for works such as Gulliver's Travels
Gulliver's Travels
Travels into Several Remote Nations of the World, in Four Parts. By Lemuel Gulliver, First a Surgeon, and then a Captain of Several Ships, better known simply as Gulliver's Travels , is a novel by Anglo-Irish writer and clergyman Jonathan Swift that is both a satire on human nature and a parody of...
, A Modest Proposal
A Modest Proposal
A Modest Proposal for Preventing the Children of Poor People in Ireland From Being a Burden on Their Parents or Country, and for Making Them Beneficial to the Publick, commonly referred to as A Modest Proposal, is a Juvenalian satirical essay written and published anonymously by Jonathan Swift in...
, A Journal to Stella
A Journal to Stella
A Journal to Stella is a work by Jonathan Swift first partly published posthumously in 1766.It consists of 65 letters to his friend, Esther Johnson.Amongst the references to contemporaries of the dean, frequent mention is made of Elizabeth Germain....
, Drapier's Letters, The Battle of the Books
The Battle of the Books
The Battle of the Books is the name of a short satire written by Jonathan Swift and published as part of the prolegomena to his A Tale of a Tub in 1704. It depicts a literal battle between books in the King's Library , as ideas and authors struggle for supremacy...
, An Argument Against Abolishing Christianity
An Argument Against Abolishing Christianity
An Argument to Prove that the Abolishing of Christianity in England May, as Things Now Stand Today, be Attended with Some Inconveniences, and Perhaps not Produce Those Many Good Effects Proposed Thereby, commonly referred to as An Argument Against Abolishing Christianity, is an essay by Jonathan...
, and A Tale of a Tub
A Tale of a Tub
A Tale of a Tub was the first major work written by Jonathan Swift, composed between 1694 and 1697 and published in 1704. It is arguably his most difficult satire, and perhaps his most masterly...
. Swift is probably the foremost prose satirist in the English language
English language
English is a West Germanic language that arose in the Anglo-Saxon kingdoms of England and spread into what was to become south-east Scotland under the influence of the Anglian medieval kingdom of Northumbria...
, and is less well known for his poetry
Poetry
Poetry is a form of literary art in which language is used for its aesthetic and evocative qualities in addition to, or in lieu of, its apparent meaning...
. Swift originally published all of his works under pseudonym
Pseudonym
A pseudonym is a name that a person assumes for a particular purpose and that differs from his or her original orthonym...
s—such as Lemuel Gulliver
Lemuel Gulliver
Lemuel Gulliver is the protagonist and narrator of Gulliver's Travels, a novel written by Jonathan Swift, first published in 1726.-In Gulliver's Travels:...
, Isaac Bickerstaff
Isaac Bickerstaff
Isaac Bickerstaff Esq was a pseudonym used by Jonathan Swift as part of a hoax to predict the death of then famous Almanac–maker and astrologer John Partridge....
, M.B.

Many years ago I read of an author who stated something like 'the rich will eat our young'. Although I am aware that Swift satirically wrote that the...

There are certain common privileges of a writer, the benefit whereof, I hope, there will be no reason to doubt; particularly, that where I am not understood, it shall be concluded, that something very useful and profound is couched underneath; and again, that whatever word or sentence is printed in a different character, shall be judged to contain something extraordinary either or wit of sublime."

Books, the children of the brain.

Satire is a sort of glass, wherein beholders do generally discover everybody's face but their own.

Instead of dirt and poison we have rather chosen to fill our hives with honey and wax; thus furnishing mankind with the two noblest of things, which are sweetness and light.

Laws are like cobwebs, which may catch small flies, but let wasps and hornets break through.

A Critical Essay upon the Faculties of the Mind (1707)

There is nothing in this world constant, but inconstancy.

A Critical Essay upon the Faculties of the Mind (1707)

There are few, very few, that will own themselves in a mistake, though all the World sees them to be in downright nonsense.

And surely one of the best rules in conversation is, never to say a thing which any of the company can reasonably wish had been left unsaid…

Hints Toward an Essay on Conversation (1709)