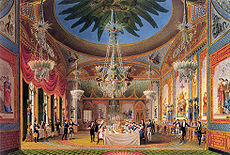 The Royal Pavilion is a former royal residence located in Brighton
Brighton
Brighton is the major part of the city of Brighton and Hove in East Sussex, England on the south coast of Great Britain...
, England
England
England is a country that is part of the United Kingdom. It shares land borders with Scotland to the north and Wales to the west; the Irish Sea is to the north west, the Celtic Sea to the south west, with the North Sea to the east and the English Channel to the south separating it from continental...
. It was built in three campaigns, beginning in 1787, as a seaside retreat for George, Prince of Wales
George IV of the United Kingdom
George IV was the King of the United Kingdom of Great Britain and Ireland and also of Hanover from the death of his father, George III, on 29 January 1820 until his own death ten years later...
, from 1811 Prince Regent
Prince Regent
A prince regent is a prince who rules a monarchy as regent instead of a monarch, e.g., due to the Sovereign's incapacity or absence ....
. It is often referred to as the Brighton Pavilion. It is built in the Indo-Saracenic
Indo-Saracenic
The Indo-Saracenic Revival was an architectural style movement by British architects in the late 19th century in British India...
style prevalent in India
India
India , officially the Republic of India , is a country in South Asia. It is the seventh-largest country by geographical area, the second-most populous country with over 1.2 billion people, and the most populous democracy in the world...
for most of the 19th century, with the most extravagant chinoiserie
Chinoiserie
Chinoiserie, a French term, signifying "Chinese-esque", and pronounced ) refers to a recurring theme in European artistic styles since the seventeenth century, which reflect Chinese artistic influences...
interiors ever executed in the British Isles.

The Prince of Wales, who later became King George IV
George IV of the United Kingdom
George IV was the King of the United Kingdom of Great Britain and Ireland and also of Hanover from the death of his father, George III, on 29 January 1820 until his own death ten years later...
, first visited Brighton in 1783, soon after achieving his majority. The seaside town had become fashionable through the residence of George's uncle, the Duke of Cumberland
Duke of Cumberland
Duke of Cumberland is a peerage title that was conferred upon junior members of the British Royal Family, named after the county of Cumberland.-History:...
, whose tastes for cuisine, gaming, the theatre and fast living the young prince shared, and with whom he lodged in Brighton at Grove House. In addition, his physician advised him that the seawater would be beneficial for his gout
Gout
Gout is a medical condition usually characterized by recurrent attacks of acute inflammatory arthritis—a red, tender, hot, swollen joint. The metatarsal-phalangeal joint at the base of the big toe is the most commonly affected . However, it may also present as tophi, kidney stones, or urate...
. In 1786, under a financial cloud that had been examined in Parliament for the extravagances incurred in building Carlton House
Carlton House
Carlton House was a mansion in London, best known as the town residence of the Prince Regent for several decades from 1783. It faced the south side of Pall Mall, and its gardens abutted St. James's Park in the St James's district of London...
, London, he rented a modest erstwhile farmhouse facing the Steine, a grassy area of Brighton used as a promenade by visitors. Being remote from the Royal Court in London
London
London is the capital city of :England and the :United Kingdom, the largest metropolitan area in the United Kingdom, and the largest urban zone in the European Union by most measures. Located on the River Thames, London has been a major settlement for two millennia, its history going back to its...
, the Pavilion was also a discreet location for the Prince to enjoy liaisons with his long-time companion, Mrs Fitzherbert
Maria Anne Fitzherbert
Maria Fitzherbert , was the woman with whom the future George IV secretly undertook a form of marriage, and his companion for a large part of his adult life. However the marriage in England was invalid under English civil laws concerning royal marriages...
. The Prince had wished to marry her, and did so in secrecy, as her Roman Catholicism ruled out marriage under the Royal Marriages Act.

In 1787 the designer of Carlton House, Henry Holland
Henry Holland (architect)
Henry Holland was an architect to the English nobility. Born in Fulham, London, his father also Henry ran a building firm and he built several of Capability Brown's buildings, although Henry would have learnt a lot from his father about the practicalities of construction it was under Brown that he...
, was employed to enlarge the existing building, which became one wing of the Marine Pavilion, flanking a central rotunda, which contained only three main rooms, a breakfast room, dining room and library, fitted out in Holland's French-influenced neoclassical style
Neoclassical architecture
Neoclassical architecture was an architectural style produced by the neoclassical movement that began in the mid-18th century, manifested both in its details as a reaction against the Rococo style of naturalistic ornament, and in its architectural formulas as an outgrowth of some classicizing...
, with decorative paintings by Biagio Rebecca
Biagio Rebecca
Biagio Rebecca was an Italian painter, active mainly as a fresco decorator in England. Born in Rome, his apprenticeship is unknown. In England, he was known for neoclassical scenes from mythology, often collaborating with Robert Adam for example at Harewood House and at Kedleston Hall. He also...
. In 1801-02 the Pavilion was enlarged with a new dining room and conservatory, to designs of Peter Frederick Robinson
Peter Frederick Robinson
Peter Frederick Robinson was an English architect.-Life:Peter Frederick Robinson began his career in Henry Holland's office and worked under William Porden at the Brighton Pavilion in 1801–2...
, in Holland's office. The Prince also purchased land surrounding the property, on which a grand riding school and stables were built in an Indian style in 1803-08, to designs by William Porden
William Porden
William Porden was a versatile English architect. Born in Kingston upon Hull, he trained under James Wyatt and Samuel Pepys Cockerell....
that dwarfed the Marine Pavilion, in providing stabling for sixty horses.

Between 1815 and 1822 the designer John Nash
John Nash (architect)
John Nash was a British architect responsible for much of the layout of Regency London.-Biography:Born in Lambeth, London, the son of a Welsh millwright, Nash trained with the architect Sir Robert Taylor. He established his own practice in 1777, but his career was initially unsuccessful and...
redesigned and greatly extended the Pavilion, and it is the work of Nash which can be seen today. The palace looks rather striking in the middle of Brighton, having a very India
India
India , officially the Republic of India , is a country in South Asia. It is the seventh-largest country by geographical area, the second-most populous country with over 1.2 billion people, and the most populous democracy in the world...
n appearance on the outside. However, the fanciful interior design, primarily by Frederick Crace
Frederick Crace
Frederick Crace was an English interior decorator, who worked for George IV when Prince of Wales, for whom he created the chinoiserie interiors of the Brighton Pavilion. Crace was also a collector of maps and topographical prints, now at the British Library.Frederick was the son of the prominent...
and the little-known decorative painter Robert Jones, is heavily influenced by both Chinese
China
Chinese civilization may refer to:* China for more general discussion of the country.* Chinese culture* Greater China, the transnational community of ethnic Chinese.* History of China* Sinosphere, the area historically affected by Chinese culture...
and Indian fashion (with Mughal
Mughal architecture
Mughal architecture, an amalgam of Islamic, Persian, Turkish and Indian architecture, is the distinctive style developed by the Mughals in the 16th, 17th and 18th centuries in what is now India, Pakistan, Bangladesh and Afghanistan. It is symmetrical and decorative in style.The Mughal dynasty was...
and Islamic
Islamic architecture
Islamic architecture encompasses a wide range of both secular and religious styles from the foundation of Islam to the present day, influencing the design and construction of buildings and structures in Islamic culture....
architectural
Architecture
Architecture is both the process and product of planning, designing and construction. Architectural works, in the material form of buildings, are often perceived as cultural and political symbols and as works of art...
elements). It is a prime example of the exoticism that was an alternative to more classicising mainstream taste in the Regency style.

After the death of George IV in 1830, his successor King William IV
William IV of the United Kingdom
William IV was King of the United Kingdom of Great Britain and Ireland and of Hanover from 26 June 1830 until his death...
also stayed in the Pavilion on his frequent visits to Brighton. However, Queen Victoria
Victoria of the United Kingdom
Victoria was the monarch of the United Kingdom of Great Britain and Ireland from 20 June 1837 until her death. From 1 May 1876, she used the additional title of Empress of India....
disliked Brighton and the lack of privacy the Pavilion afforded her on her visits there (especially once Brighton became accessible to Londoners by rail in 1841) and the cramped quarters it provided her growing family. She purchased the land for Osborne House
Osborne House
Osborne House is a former royal residence in East Cowes, Isle of Wight, UK. The house was built between 1845 and 1851 for Queen Victoria and Prince Albert as a summer home and rural retreat....
in the Isle of Wight, which became the summer home of the royal family. After her last visit to Brighton in 1845, the Government planned to sell the building and grounds. The Brighton Commissioners and the Brighton Vestry successfully petitioned the Government to sell the Pavilion to the town for £53,000 in 1850 under the Brighton Improvement (Purchase of the Royal Pavilion and Grounds) Act 1850. The town used the building as assembly rooms
Assembly rooms
In Great Britain and Ireland, especially in the 18th and 19th centuries, assembly rooms were gathering places for members of the higher social classes open to members of both sexes. At that time most entertaining was done at home and there were few public places of entertainment open to both sexes...
. Many of the Pavilion's original fixtures and fittings were removed on the order of the royal household at the time of the sale, most ending up either in Buckingham Palace or Windsor Castle. Queen Victoria returned to Brighton large quantities of unused fittings in the late 1860s and George V and Queen Mary returned more after the First World War. Since the Second World War, the municipality of Brighton has spent a great deal of time, effort and money restoring the Pavilion to its state at the time of King George IV, encouraged by the permanent loan of over 100 items of furniture from Queen Elizabeth II in the 1950s, and has undertaken an extensive programme of restoring the rooms, reinstating stud walls, and creating replicas of some original fittings and occasionally pieces of furniture.