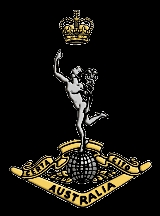 Encyclopedia
The Royal Australian Corps of Signals (RASigs) is one of the 'arms' (combat support corps) of the Australian Army
Australian Army
The Australian Army is Australia's military land force. It is part of the Australian Defence Force along with the Royal Australian Navy and the Royal Australian Air Force. While the Chief of Defence commands the Australian Defence Force , the Army is commanded by the Chief of Army...
. It is responsible for installing, maintaining and operating all types of telecommunications equipment and information systems. The motto of the Signals Corps is Certa Cito and is translated as 'Swift and Sure', signifying the aim of the signal service - that communication be carried out with maximum speed and certainty. Like their British counterparts
Royal Corps of Signals
The Royal Corps of Signals is one of the combat support arms of the British Army...
, the Royal Australian Corps of Signals' flag and hat badge feature Mercury
Mercury (mythology)
Mercury was a messenger who wore winged sandals, and a god of trade, the son of Maia Maiestas and Jupiter in Roman mythology. His name is related to the Latin word merx , mercari , and merces...
, the winged messenger of the gods, affectionately referred to by members of the corps as "Jimmy" (the origin dates back to the merge with Engineers when the Engineer's band's Drum Major had a "Jimmy" on his staff).

The Corps has recently taken over the responsibility for Army Information Systems. Signal Corps personnel now control large integrated information systems and are responsible for the installation and operation of local area network
Local area network
A local area network is a computer network that interconnects computers in a limited area such as a home, school, computer laboratory, or office building...
s using state-of-the art computer equipment.
Specialist roles in the Corps include:
Communication System Operator (Known in the Corps as "Operators"),
Telecommunications Technician (Known as "Techs" or "Techies"),
Electronic Warfare Operator (Known as "Bears" from being primarily posted to a base near Cabarlah (Koala), QLD") and
Information Systems Technician (Known as "Geeks"). 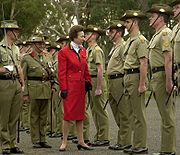 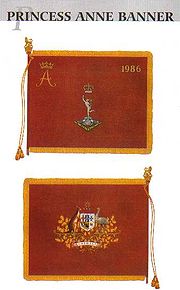 Australia has the unique distinction of having had the first regularly formed signal unit in the British Empire
British Empire
The British Empire comprised the dominions, colonies, protectorates, mandates and other territories ruled or administered by the United Kingdom. It originated with the overseas colonies and trading posts established by England in the late 16th and early 17th centuries. At its height, it was the...
. The Corps began in 1869 as a small "torpedo and signals corp", located in New South Wales
New South Wales
New South Wales is a state of :Australia, located in the east of the country. It is bordered by Queensland, Victoria and South Australia to the north, south and west respectively. To the east, the state is bordered by the Tasman Sea, which forms part of the Pacific Ocean. New South Wales...
and Victoria
Victoria (Australia)
Victoria is the second most populous state in Australia. Geographically the smallest mainland state, Victoria is bordered by New South Wales, South Australia, and Tasmania on Boundary Islet to the north, west and south respectively....
. These units existed until 1882, when they were disbanded. In 1885, a "signalling corps", composed of one officer and twelve other ranks, was created in South Australia
South Australia
South Australia is a state of Australia in the southern central part of the country. It covers some of the most arid parts of the continent; with a total land area of , it is the fourth largest of Australia's six states and two territories.South Australia shares borders with all of the mainland...
and remained active until 1901.

After the inception of the Commonwealth Forces, an "Australian Corps of Signallers" was formed on 12 January 1906. This day is recognised as the Signal Corps' birthday. The Corps remained as a self contained unit until 1911 when it was merged with Australian Engineers.

On 10 November 1948, His Majesty King George VI
George VI of the United Kingdom
George VI was King of the United Kingdom and the Dominions of the British Commonwealth from 11 December 1936 until his death...
conferred the title "Royal" on the Australian Corps of Signals. The day is recognised a "Corps Day", and commemorative functions are held on, or as near as possible to, 10 November each year.

Approval was given by Her Royal Highness, Princess Anne
Anne, Princess Royal
Princess Anne, Princess Royal , is the only daughter of Elizabeth II and Prince Philip, Duke of Edinburgh...
, The Princess Royal
Princess Royal
Princess Royal is a style customarily awarded by a British monarch to his or her eldest daughter. The style is held for life, so a princess cannot be given the style during the lifetime of another Princess Royal...
, the Signals Corps' Colonel-in-Chief
Colonel-in-Chief
In the various Commonwealth armies, the Colonel-in-Chief of a regiment is its patron. This position is distinct from that of Colonel of the Regiment. They do not have an operational role. They are however kept informed of all important activities of the regiment, and pay occasional visits to its...
, on 10 September 1980 for the Corps to carry a banner bearing her Cipher. The banner is known as "The Princess Anne Banner", and was presented to the Signals Corps by the then Governor-General
Governor-General
A Governor-General, is a vice-regal person of a monarch in an independent realm or a major colonial circonscription. Depending on the political arrangement of the territory, a Governor General can be a governor of high rank, or a principal governor ranking above "ordinary" governors.- Current uses...
, The Right Honourable Sir Ninian Stephen
Ninian Stephen
Sir Ninian Martin Stephen, is a retired politician and judge, who served as the 20th Governor-General of Australia and as a Justice in the High Court of Australia.-Early life:...
on 29 November 1986.

On 5 July 2000, a parade was held for her Royal Highness, Princess Anne, The Princess Royal at Simpson Barracks
Simpson Barracks
Simpson Barracks is an Australian Army facility in the suburb of Macleod in Melbourne, Victoria, Australia.Simpson Barracks is home to the DFSS , Financial Services Unit, Defence Force School of Music, Land Warfare Centre and the headquarters of 4th Brigade...
, Watsonia
Watsonia, Victoria
Watsonia is a suburb in Melbourne, Victoria, Australia, 16 km north-east from Melbourne's central business district. Its Local Government Area is the City of Banyule. At the 2006 Census, Watsonia had a population of 4905.-History:...
, marking the 75th anniversary of the Corps. 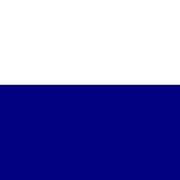 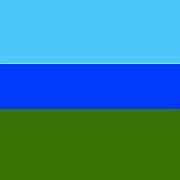 The Royal Australian Corps of Signals has two sets of colours, tactical and domestic. The Tactical colours are White on Royal blue. White symbolises the ribbons wound on the Caduceus
Caduceus
The caduceus is the staff carried by Hermes in Greek mythology. The same staff was also borne by heralds in general, for example by Iris, the messenger of Hera. It is a short staff entwined by two serpents, sometimes surmounted by wings...
of the God Hermes
Hermes
Hermes is the great messenger of the gods in Greek mythology and a guide to the Underworld. Hermes was born on Mount Kyllini in Arcadia. An Olympian god, he is also the patron of boundaries and of the travelers who cross them, of shepherds and cowherds, of the cunning of thieves, of orators and...
and the Blue representing the Royal Colours. The domestic colours, sky blue on dark blue on dark green, represent the three mediums of communication: air, sea and land.

Soldiers joining the Signals Corps are given training specific to their field at the Defence Force School of Signals after first graduating from recruit training at the Army Recruit Training Centre, Kapooka
Kapooka
thumb|right|300px|Army Recruit Training Centre entrance signArmy Recruit Training Centre is the official name denoted by the Australian Army Department of Defence since December 1, 1998 for its Recruit Training Centre situated at Kapooka, an outer suburb of Wagga Wagga, in the Riverina region of...
. The School of Signals is a tri-service educational facility located on Simpson Barracks
Simpson Barracks
Simpson Barracks is an Australian Army facility in the suburb of Macleod in Melbourne, Victoria, Australia.Simpson Barracks is home to the DFSS , Financial Services Unit, Defence Force School of Music, Land Warfare Centre and the headquarters of 4th Brigade...
in Watsonia, Victoria
Watsonia, Victoria
Watsonia is a suburb in Melbourne, Victoria, Australia, 16 km north-east from Melbourne's central business district. Its Local Government Area is the City of Banyule. At the 2006 Census, Watsonia had a population of 4905.-History:...
. It is the home of the Signals Corps and the centre for defence training in communications and information systems for the Australian Defence Force. The school was previously located at Balcombe, before moving to Watsonia in the late 1960s. though Balcombe was maintained as a training location for some Signals and Army apprentice courses into the 1980s. The School also has an Electronic Warfare wing, called the Joint Telecommunications School, located on Borneo Barracks in Cabarlah, Queensland.

Regardless of specialisation, all soldiers joining the Signals Corps (On successful completion of the 80 Day Recruit Course held in Kapooka) first complete an eight day Common Corps course which provides basic Royal Australian Corps of Signals skills in radio, line laying and computing and is a prerequisite for all Australian Regular Army RA Sigs trade courses. The course (and most subsequent training) is held at Defence Force School of Signals, Simpson Barracks Macleod, Victoria. On successful completion of the Common Corps course, students will be placed in a holding platoon while they wait for their trade course to start. During this time students may be placed on other courses, such as driver training.

Parakeet was the project name used by the Australian Army's mobile BTN (Battlefield Telecommunications Network). It was introduced into service in the mid 1990s through project JP65. At the time of its introduction, Project Parakeet was considered to be a highly advanced military communications
Military communications
Historically, the first military communications had the form of sending/receiving simple signals . Respectively, the first distinctive tactics of military communications were called Signals, while units specializing in those tactics received the Signal Corps name...
system. It included secure voice
Secure voice
Secure voice is a term in cryptography for the encryption of voice communication over a range of communication types such as radio, telephone or IP.-History:...
and data trunking
Trunking
In modern communications, trunking is a concept by which a communications system can provide network access to many clients by sharing a set of lines or frequencies instead of providing them individually. This is analogous to the structure of a tree with one trunk and many branches. Examples of...
services. In 2002, the Defence Force raised Project JP2072 to upgrade its sub-systems. Today, years after its introduction, it is still incorrectly referred to as Parakeet. The Parakeet suite of equipment is operated by members of the Operator Bearer Systems and Technician trade.