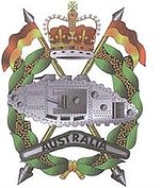 The RAAC is primarily equipped with three types of vehicle: