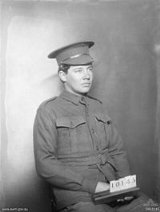 Longmore set aside his life as a farm-hand in Geelong, Victoria
Geelong, Victoria
Geelong is a port city located on Corio Bay and the Barwon River, in the state of Victoria, Australia, south-west of the state capital; Melbourne. It is the second most populated city in Victoria and the fifth most populated non-capital city in Australia...
, when he enlisted in the Australian Imperial Force
Australian Imperial Force
The Australian Imperial Force was the name given to all-volunteer Australian Army forces dispatched to fight overseas during World War I and World War II.* First Australian Imperial Force * Second Australian Imperial Force...
at age 21. Private (Pte) Roy Longmore, 3rd Reinforcements, 21st Battalion, of Bannockburn, Victoria enlisted on 13 July 1915; and he embarked from Melbourne aboard HMAT Anchises on 26 August 1915. After training in Egypt, was sent to the Battle of Gallipoli
Battle of Gallipoli
The Gallipoli Campaign, also known as the Dardanelles Campaign or the Battle of Gallipoli, took place at the peninsula of Gallipoli in the Ottoman Empire between 25 April 1915 and 9 January 1916, during the First World War...
where he was a tunnel digger with the 2nd Division, burrowing underneath the Turkish positions and laying mines. After evacuation from Turkey
Turkey
Turkey , known officially as the Republic of Turkey , is a Eurasian country located in Western Asia and in East Thrace in Southeastern Europe...
, he fought at Pozières
Battle of Pozières
The Battle of Pozières was a two week struggle for the French village of Pozières and the ridge on which it stands, during the middle stages of the 1916 Battle of the Somme. Though British divisions were involved in most phases of the fighting, Pozières is primarily remembered as an Australian battle...
, Armentières, and Villers-Bretonneux. He was wounded three times in France and was momentarily given up for dead when he was shot as the Armistice
Armistice
An armistice is a situation in a war where the warring parties agree to stop fighting. It is not necessarily the end of a war, but may be just a cessation of hostilities while an attempt is made to negotiate a lasting peace...
in November 1918, approached. He later recalled,

"We were patrolling in a gully when suddenly half a dozen Germans appeared over a hill armed with machine guns and opened fire. Jerry riddled me, knocking me flat on my back, and the last I heard was 'Longy's had it, they got him.'"


Fortunately, his fellow soldiers saw him move and rescued him. Lance Sergeant (LSgt) and returned to Australia on 16 March 1919 as a member of the 2nd Pioneer Battalion.

After returning to Australia in 1919, his injuries made returning to farm work impossible, so he drove a taxi in Melbourne. Another changed caused by the war was more telling. Before, he had hunted rabbits; but he later explained that when he returned home, he no longer had an appetite for firing at anything alive.

Longmore married and had one son, Eric. The one-time LSgt Longmore died peacefully in his sleep at a Burwood Nursing Home aged 107 on 21 June 2001. He was the second last Anzac to die. At his passing, Australia honored him one final time with a state funeral
State funeral
A state funeral is a public funeral ceremony, observing the strict rules of protocol, held to honor heads of state or other important people of national significance. State funerals usually include much pomp and ceremony as well as religious overtones and distinctive elements of military tradition...
.

Longmore's 45-cent Legend stamp displays the soldier's portrait as a young man, photographed just prior to his departure for Gallipoli. Formal photographs of the other two ANZAC centenarians complete this stamp set. In addition, a fourth stamp features the 1914-15 star medal which was presented to all those who fought in campaigns during those war years. These stamps, designed by Cathleen Cram of the Australia Post Design Studio, commemorate the story of events and people shaping contemporary Australia.
The Longmore stamp honors him as an individual and as a representative of all 68,000 soldiers at Gallipoli whose actions affected Australia's evolving self-image.