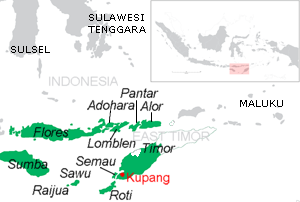 Rote Island is an island
Island
An island or isle is any piece of sub-continental land that is surrounded by water. Very small islands such as emergent land features on atolls can be called islets, cays or keys. An island in a river or lake may be called an eyot , or holm...
of Indonesia
Indonesia
Indonesia , officially the Republic of Indonesia , is a country in Southeast Asia and Oceania. Indonesia is an archipelago comprising approximately 13,000 islands. It has 33 provinces with over 238 million people, and is the world's fourth most populous country. Indonesia is a republic, with an...
, part of the East Nusa Tenggara
East Nusa Tenggara
East Nusa Tenggara is a province of Indonesia, located in the eastern portion of the Lesser Sunda Islands, including West Timor. The provincial capital is Kupang, located on West Timor...
province
Provinces of Indonesia
The province is the highest tier of local government subnational entity in Indonesia. Each province has its own local government, headed by a governor, and has its own legislative body...
of the Lesser Sunda Islands
Lesser Sunda Islands
The Lesser Sunda Islands or Nusa Tenggara are a group of islands in the southern Maritime Southeast Asia, north of Australia. Together with the Greater Sunda Islands to the west they make up the Sunda Islands...
. It has an area of 1200 km² (463 sq mi). It lies 500 km (311 mi) northeast of the Australia
Australia
Australia , officially the Commonwealth of Australia, is a country in the Southern Hemisphere comprising the mainland of the Australian continent, the island of Tasmania, and numerous smaller islands in the Indian and Pacific Oceans. It is the world's sixth-largest country by total area...
n coast and 170 km (106 mi) northeast of the Ashmore and Cartier Islands
Ashmore and Cartier Islands
The Territory of the Ashmore and Cartier Islands is an external territory of Australia consisting of two groups of small low-lying uninhabited tropical islands in the Indian Ocean situated on the edge of the continental shelf north-west of Australia and south of the Indonesian island of...
. The island is situated to the southwest of the larger island of Timor
Timor
Timor is an island at the southern end of Maritime Southeast Asia, north of the Timor Sea. It is divided between the independent state of East Timor, and West Timor, belonging to the Indonesian province of East Nusa Tenggara. The island's surface is 30,777 square kilometres...
. To the north is the Savu Sea
Savu Sea
The Savu Sea is a small sea within Indonesia named for the island of Savu on its southern boundary. It is bounded by Savu and Rai Jua to the south, the islands of Rote and Timor to the east, Flores and the Alor archipelago to the north/northwest, and the island of Sumba to the west/northwest...
, and to the south is the Timor Sea
Timor Sea
The Timor Sea is a relatively shallow sea bounded to the north by the island of Timor, to the east by the Arafura Sea, to the south by Australia and to the west by the Indian Ocean....
. To the west is Savu
Savu
Savu is the largest of a group of three islands, situated midway between Sumba and Rote, west of Timor, in Indonesia's eastern province, East Nusa Tenggara. Ferries connect the islands to Waingapu, on Sumba, and Kupang, in West Timor...
and Sumba
Sumba
Sumba is an island in eastern Indonesia, is one of the Lesser Sunda Islands, and is in the province of East Nusa Tenggara. Sumba has an area of 11,153 km², and the population was officially at 611,422 in 2005...
. The uninhabited Dana Island (also called Ndana), just south of Rote, with an area of 14 km² (5 sq mi), is the southernmost island of Indonesia. Along with some other nearby small islands, such as Ndao, it forms the kabupaten (regency) of Rote Ndao Regency
Rote Ndao Regency
Rote Ndao Regency is a regency in East Nusa Tenggara province of Indonesia, consisting primarily of the island of Rote, situated south-west of the western tip of West Timor. Established in 2002 formerly part of Kupang Regency, the regency has its seat in Baa. The population is 119.711 in 2010...
, which in 2010 decennial census recorded a population of 119,711.

The main town, called Baa, is located in the north of the island. It has a good surf
Surfing
Surfing' is a surface water sport in which the surfer rides a surfboard on the crest and face of a wave which is carrying the surfer towards the shore...
area in the south around the village of Nembralla. There is a daily ferry
Ferry
A ferry is a form of transportation, usually a boat, but sometimes a ship, used to carry primarily passengers, and sometimes vehicles and cargo as well, across a body of water. Most ferries operate on regular, frequent, return services...
to the island from Kupang
Kupang
Not to be confused with Tanjung Kupang in JohoreKupang is the provincial capital of East Nusa Tenggara province in southeast Indonesia....
, the provincial capital on West Timor
West Timor
West Timor is the western and Indonesian portion of the island of Timor and part of the province of East Nusa Tenggara, .During the colonial period it was known as "Dutch Timor" and was a centre of Dutch loyalists during the Indonesian National Revolution...
, which brings tourists.

Rote has many historical relics including fine antique Chinese porcelain
Chinese porcelain
Chinese ceramic ware shows a continuous development since the pre-dynastic periods, and is one of the most significant forms of Chinese art. China is richly endowed with the raw materials needed for making ceramics. The first types of ceramics were made during the Palaeolithic era...
, as well as ancient arts and traditions. Many prominent Indonesia
Indonesia
Indonesia , officially the Republic of Indonesia , is a country in Southeast Asia and Oceania. Indonesia is an archipelago comprising approximately 13,000 islands. It has 33 provinces with over 238 million people, and is the world's fourth most populous country. Indonesia is a republic, with an...
nationalist leaders were born here. A popular music instrument Sasando
Sasando
Sasando is a harp-like traditional music string instrument native of Rote island of East Nusa Tenggara, Indonesia.The name ”sasando” derived from Rote dialect ”sasandu” means "vibrating" or "sounded instrument". It is believed that sasando already known to Rote people since 7th century.The main...
, which is made of palm leaves. According to legend, this island got its name accidentally when a lost Portuguese
Portuguese people
The Portuguese are a nation and ethnic group native to the country of Portugal, in the west of the Iberian peninsula of south-west Europe. Their language is Portuguese, and Roman Catholicism is the predominant religion....
sailor arrived and asked a farmer where he was. The surprised farmer, who could not speak Portuguese, introduced himself, "Rote".

Rote, just off the southern tip of Timor Island, consists of rolling hills, terraced plantations, acacia palm, savanna and some forests.
The Rotinese depend, like the Savunese, on lontar palm for basic survival, but also as a supplement to their income from fishing and jewelry making.

Agriculture
Agriculture
Agriculture is the cultivation of animals, plants, fungi and other life forms for food, fiber, and other products used to sustain life. Agriculture was the key implement in the rise of sedentary human civilization, whereby farming of domesticated species created food surpluses that nurtured the...
is the main form of employment. Fishing is also important, especially in the eastern village of Papela, which has led to disputes with Australia over the water between them.