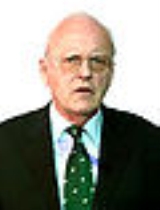 Roman Herzog was born in Landshut
Landshut
Landshut is a city in Bavaria in the south-east of Germany, belonging to both Eastern and Southern Bavaria. Situated on the banks of the River Isar, Landshut is the capital of Lower Bavaria, one of the seven administrative regions of the Free State of Bavaria. It is also the seat of the...
, Bavaria in 1934 to a Protestant family.

He studied law in Munich and took his first juristic state exam in 1957. In 1958, he gained the title Doctor juris and worked as an assistant at the University of Munich until 1964, where he also passed his second juristic state exam. For his paper Die Wesensmerkmale der Staatsorganisation in rechtlicher und entwicklungsgeschichtlicher Sicht ("Characteristics of State Organization from a Juristic and Developmental-Historical Viewpoint"), in 1964 he was awarded the title of professor, a title of academic distinction in Germany, and taught at the University of Munich until 1966. From 1966 he taught state law and political science
Political science
Political Science is a social science discipline concerned with the study of the state, government and politics. Aristotle defined it as the study of the state. It deals extensively with the theory and practice of politics, and the analysis of political systems and political behavior...
as a full professor at the Free University of Berlin
Free University of Berlin
Freie Universität Berlin is one of the leading and most prestigious research universities in Germany and continental Europe. It distinguishes itself through its modern and international character. It is the largest of the four universities in Berlin. Research at the university is focused on the...
(FUB). In 1969, he accepted an administrative position at the FUB in Speyer
Speyer
Speyer is a city of Rhineland-Palatinate, Germany with approximately 50,000 inhabitants. Located beside the river Rhine, Speyer is 25 km south of Ludwigshafen and Mannheim. Founded by the Romans, it is one of Germany's oldest cities...
and was the University President from 1971 to 1972.

In 1973 his political career began as a representative of the state (Land) of Rhineland-Palatinate
Rhineland-Palatinate
Rhineland-Palatinate is one of the 16 states of the Federal Republic of Germany. It has an area of and about four million inhabitants. The capital is Mainz. English speakers also commonly refer to the state by its German name, Rheinland-Pfalz ....
with the Federal government in Bonn
Bonn
Bonn is the 19th largest city in Germany. Located in the Cologne/Bonn Region, about 25 kilometres south of Cologne on the river Rhine in the State of North Rhine-Westphalia, it was the capital of West Germany from 1949 to 1990 and the official seat of government of united Germany from 1990 to 1999....
. He was minister for culture and sports in the Baden-Württemberg
Baden-Württemberg
Baden-Württemberg is one of the 16 states of Germany. Baden-Württemberg is in the southwestern part of the country to the east of the Upper Rhine, and is the third largest in both area and population of Germany's sixteen states, with an area of and 10.7 million inhabitants...
State Government from 1978. In 1980 he was elected to the State Parliament (Landtag) and took over the state Ministry of the Interior.

In 1983 he became a judge at the Federal Constitutional Court of Germany
Federal Constitutional Court of Germany
The Federal Constitutional Court is a special court established by the Grundgesetz, the German basic law...
(Bundesverfassungsgericht) in Karlsruhe
Karlsruhe
The City of Karlsruhe is a city in the southwest of Germany, in the state of Baden-Württemberg, located near the French-German border.Karlsruhe was founded in 1715 as Karlsruhe Palace, when Germany was a series of principalities and city states...
. From 1987 until 1994, he also served as the president of this Court, until he was elected President of Germany by the Federal Assembly (Bundesversammlung
Bundesversammlung (Germany)
The Federal Convention is a special body in the institutional system of Germany, convened solely for the purpose of electing the German Federal President , either every five years or within 30 days of a president's resignation, death or removal from office.The Bundesversammlung includes the entire...
) in 1994. He retained this position until 1999, when he was succeeded by Johannes Rau
Johannes Rau
Johannes Rau was a German politician of the SPD. He was President of Germany from 1 July 1999 until 30 June 2004, and Minister-President of North Rhine-Westphalia from 1978 to 1998.-Education and work:...
.

In 1994 Herzog participated in the commemorations of the 50th anniversary of the Warsaw Uprising
Warsaw Uprising
The Warsaw Uprising was a major World War II operation by the Polish resistance Home Army , to liberate Warsaw from Nazi Germany. The rebellion was timed to coincide with the Soviet Union's Red Army approaching the eastern suburbs of the city and the retreat of German forces...
during the Nazi occupation of Poland. In a widely commended speech, he paid tribute to the Polish fighters and people and asked Poles for "forgiveness for what has been done to you by the Germans".