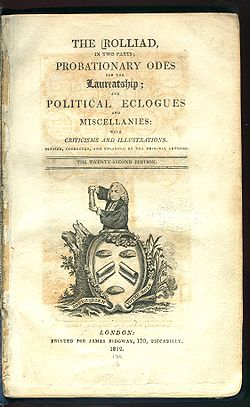 The Rolliad, in full Criticisms on the Rolliad, is a pioneering work of British
United Kingdom
The United Kingdom of Great Britain and Northern IrelandIn the United Kingdom and Dependencies, other languages have been officially recognised as legitimate autochthonous languages under the European Charter for Regional or Minority Languages...
satire
Satire
Satire is primarily a literary genre or form, although in practice it can also be found in the graphic and performing arts. In satire, vices, follies, abuses, and shortcomings are held up to ridicule, ideally with the intent of shaming individuals, and society itself, into improvement...
directed principally at the administration of William Pitt the Younger
William Pitt the Younger
William Pitt the Younger was a British politician of the late 18th and early 19th centuries. He became the youngest Prime Minister in 1783 at the age of 24 . He left office in 1801, but was Prime Minister again from 1804 until his death in 1806...
. It was written and originally published in serial form in the Morning Herald
Morning Herald
The Morning Herald was an early daily newspaper in the United Kingdom.The newspaper was founded in 1780 by the Reverend Sir Henry Bate Dudley, former editor of The Morning Post. It was initially a liberal paper aligned with the Prince of Wales, but later became aligned with the Tories...
in 1784-85, and its authors also contributed ancillary satires which were published together with it.

The satire takes the form of a piece of literary criticism
Literary criticism
Literary criticism is the study, evaluation, and interpretation of literature. Modern literary criticism is often informed by literary theory, which is the philosophical discussion of its methods and goals...
of an epic poem called The Rolliad which is extensively quoted. The subject of the poem is John Rolle
John Rolle, 1st Baron Rolle
John Rolle, 1st Baron Rolle was a British peer who had served as a Member of Parliament in general support of William Pitt the Younger and was later an active member of the House of Lords...
, MP for Devon
Devon
Devon is a large county in southwestern England. The county is sometimes referred to as Devonshire, although the term is rarely used inside the county itself as the county has never been officially "shired", it often indicates a traditional or historical context.The county shares borders with...
, who is being guided around Parliament by Merlin
Merlin
Merlin is a legendary figure best known as the wizard featured in the Arthurian legend. The standard depiction of the character first appears in Geoffrey of Monmouth's Historia Regum Britanniae, written c. 1136, and is based on an amalgamation of previous historical and legendary figures...
who introduces the leading personalities to him. Rolle, despite the fact that he was not a constant supporter of Pitt, was picked out for ridicule by the authors after he shouted down Edmund Burke
Edmund Burke
Edmund Burke PC was an Irish statesman, author, orator, political theorist and philosopher who, after moving to England, served for many years in the House of Commons of Great Britain as a member of the Whig party....
in the House of Commons. The authors claimed his descent from the Norman
Normans
The Normans were the people who gave their name to Normandy, a region in northern France. They were descended from Norse Viking conquerors of the territory and the native population of Frankish and Gallo-Roman stock...
Rollo of Normandy
Rollo of Normandy
Rollo , baptised Robert and so sometimes numbered Robert I to distinguish him from his descendants, was a Norse nobleman of Norwegian or Danish descent and founder and first ruler of the Viking principality in what soon became known as Normandy...
.

The Rolliad was a collaborative work and the authors remained anonymous. Joseph Richardson, a journalist, was the principal writer; George Ellis (an antiquary), Richard Tickell (a librettist) and French Laurence (Professor of Civil Law at Oxford) also contributed. There were contributors from the field of politics including Richard Fitzpatrick who was very close to Charles James Fox
Charles James Fox
Charles James Fox PC , styled The Honourable from 1762, was a prominent British Whig statesman whose parliamentary career spanned thirty-eight years of the late 18th and early 19th centuries and who was particularly noted for being the arch-rival of William Pitt the Younger...
and Lord John Townshend, a former Minister.

In addition to the eponymous Rolle, the Rolliad attacked Pitt for his consumption of port and for having no relationships with women:

'Tis true, indeed, we oft abuse him,
Because he bends to no man;
But Slander's self dares not accuse him
Of stiffness to a woman.