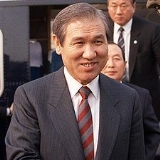 Roh befriended Chun Doo-hwan
Chun Doo-hwan
Chun Doo-hwan was a ROK Army general and the President of South Korea from 1980 to 1988. Chun was sentenced to death in 1996 for his heavy-handed response to the Gwangju Democratization Movement, but later pardoned by President Kim Young-sam with the advice of then President-elect Kim Dae-jung,...
while in high school in Daegu
Daegu
Daegu , also known as Taegu, and officially the Daegu Metropolitan City, is a city in South Korea, the fourth largest after Seoul, Busan, and Incheon, and the third largest metropolitan area in the country with over 2.5 million residents. The city is the capital and principal city of the...
. In his younger life, Roh was a keen rugby union
Rugby union
Rugby union, often simply referred to as rugby, is a full contact team sport which originated in England in the early 19th century. One of the two codes of rugby football, it is based on running with the ball in hand...
player.

A member of the army from 1955, Roh rose steadily through the ranks and was promoted to major general in 1979. A member of the Hanahoe, a secret military group, he gave critical support to a coup
Coup d'état of December Twelfth
The Coup d'état of December Twelfth or the "12.12 Military Insurrection" was a military coup d'état which took place on December 12, 1979 in South Korea....
later that year in which Chun became the de facto ruler of South Korea. Roh was a military general when he helped Chun lead troops to the Gwangju Democratization Movement in 1980.

Chun forced his way into the presidency years later when he retired from the army and Roh became a key official in Chun's government. Most notably, he oversaw preparations for the 1988 Summer Olympics
1988 Summer Olympics
The 1988 Summer Olympics, officially known as the Games of the XXIV Olympiad, were an all international multi-sport events celebrated from September 17 to October 2, 1988 in Seoul, South Korea. They were the second summer Olympic Games to be held in Asia and the first since the 1964 Summer Olympics...
in Seoul
Seoul
Seoul , officially the Seoul Special City, is the capital and largest metropolis of South Korea. A megacity with a population of over 10 million, it is the largest city proper in the OECD developed world...
, which he officially declared open.

In June 1987, Chun named Roh as the presidential candidate of the ruling Democratic Justice Party
Democratic Justice Party
The Democratic Justice Party was the ruling party of South Korea from 1980 to 1990.It was formed in 1980 as the Democratic Republican Party and was the political vehicle for Chun Doo-hwan....
. This was widely perceived as handing Roh the presidency,and triggered large pro-democracy rallies in Seoul
Seoul
Seoul , officially the Seoul Special City, is the capital and largest metropolis of South Korea. A megacity with a population of over 10 million, it is the largest city proper in the OECD developed world...
and other cities in the 1987 June Democracy Movement
June Democracy Movement
The June Democracy Movement was a nation-wide democracy movement in South Korea that generated mass protests from June 10 to June 29, 1987...
.

In response, Roh made a speech on June 29 promising a wide program of reforms. Chief among them were a new, more democratic constitution and popular election of the president. In the election, the two leading opposition figures, Kim Young-sam
Kim Young-sam
Kim Young-sam was a South Korean politician and democratic activist. From 1961, he spent 30 years as South Korea's leader of the opposition, and one of Park Chung-hee's most powerful rivals....
and Kim Dae-jung (both of whom later became presidents), were unable to overcome their differences and split the vote. This enabled Roh to win by a narrow margin and become the country's first cleanly elected president.

Roh's rule was notable for hosting the Seoul Olympics
1988 Summer Olympics
The 1988 Summer Olympics, officially known as the Games of the XXIV Olympiad, were an all international multi-sport events celebrated from September 17 to October 2, 1988 in Seoul, South Korea. They were the second summer Olympic Games to be held in Asia and the first since the 1964 Summer Olympics...
in 1988 and for his foreign policy of nordpolitik
Nordpolitik
Nordpolitik was the signature foreign policy of South Korean president Roh Tae-woo. Named in 1983 by then-Foreign Minister Lee Beom Suk but not formally announced until the run-up to the 1988 Seoul Olympics, the policy guided South Korean efforts to reach out to the traditional allies of North...
, which represented a major break from previous administrations. True to his word, he remained committed to democratic reforms. He also meets President
President
A president is a leader of an organization, company, trade union, university, or country.Etymologically, a president is one who presides, who sits in leadership...
Corazon Aquino
Corazon Aquino
Maria Corazon Sumulong Cojuangco-Aquino was the 11th President of the Philippines and the first woman to hold that office in Philippine history. She is best remembered for leading the 1986 People Power Revolution, which toppled Ferdinand Marcos and restored democracy in the Philippines...
for a series of talks between the Philippines
Philippines
The Philippines , officially known as the Republic of the Philippines , is a country in Southeast Asia in the western Pacific Ocean. To its north across the Luzon Strait lies Taiwan. West across the South China Sea sits Vietnam...
and South Korea
South Korea
The Republic of Korea , , is a sovereign state in East Asia, located on the southern portion of the Korean Peninsula. It is neighbored by the People's Republic of China to the west, Japan to the east, North Korea to the north, and the East China Sea and Republic of China to the south...
for economic, social and cultural ties, supporting Filipino athlete Leopoldo Serantes
Leopoldo Serantes
Leopoldo Serantes is an amateur boxer from the Philippines. He competed at the 1988 Seoul Olympics in the Light Flyweight division winning the bronze medal in a lost bout in the semifinals...
in the Olympics, and to discuss Unification
Unification
Unification, in computer science and logic, is an algorithmic process by which one attempts to solve the satisfiability problem. The goal of unification is to find a substitution which demonstrates that two seemingly different terms are in fact either identical or just equal...
talks to end North Korea
North Korea
The Democratic People’s Republic of Korea , , is a country in East Asia, occupying the northern half of the Korean Peninsula. Its capital and largest city is Pyongyang. The Korean Demilitarized Zone serves as the buffer zone between North Korea and South Korea...
's hostilities after the Korean War
Korean War
The Korean War was a conventional war between South Korea, supported by the United Nations, and North Korea, supported by the People's Republic of China , with military material aid from the Soviet Union...
.

In 1993, Roh's successor, Kim Young-sam, led an anti-corruption campaign that saw Roh and Chun Doo-hwan
Chun Doo-hwan
Chun Doo-hwan was a ROK Army general and the President of South Korea from 1980 to 1988. Chun was sentenced to death in 1996 for his heavy-handed response to the Gwangju Democratization Movement, but later pardoned by President Kim Young-sam with the advice of then President-elect Kim Dae-jung,...
on trial for bribery. Ironically, Kim had merged his party with Roh's in a deal that enabled him to win election. The two former presidents were later separately charged with mutiny
Mutiny
Mutiny is a conspiracy among members of a group of similarly situated individuals to openly oppose, change or overthrow an authority to which they are subject...
and treason for their roles in the 1979 coup and the 1980 Gwangju massacre
Gwangju massacre
The Gwangju Democratization Movement refers to a popular uprising in the city of Gwangju, South Korea from May 18 to May 27, 1980. During this period, citizens rose up against Chun Doo-hwan's military dictatorship and took control of the city...
.

Both were convicted in August 1996 of treason, mutiny and corruption; Chun was sentenced to death, later commuted to life imprisonment, while Roh's 22½-year jail sentence was reduced to 17 years on appeal. Both were released from prison in December 1997, pardoned by then-President Kim Dae-jung.
The source of this article is wikipedia, the free encyclopedia.  The text of this article is licensed under the GFDL.