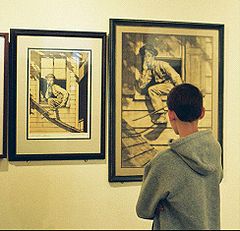 The Rockwell Center is an upscale mixed-use 15.5-hectare project in Poblacion, Makati City
Makati City
The City of Makati is one of the 17 cities that make up Metro Manila, one of the most populous metropolitan areas in the world. Makati is the financial center of the Philippines and one of the major financial, commercial and economic hubs in Asia...
, Philippines
Philippines
The Philippines , officially known as the Republic of the Philippines , is a country in Southeast Asia in the western Pacific Ocean. To its north across the Luzon Strait lies Taiwan. West across the South China Sea sits Vietnam...
. It is a project of the Rockwell Land Corporation (established 1995), which is owned by the influential Lopez family.

Rockwell Center was constructed on a 19.5-hectare lot previously occupied by a former thermal plant which was operated by Lopez-owned MERALCO
Meralco
The Manila Electric Company , also known as MERALCO or Meralco, is the Philippines' largest distributor of electrical power.The word MERALCO, is an acronym for Manila Electric Railroad And Light COmpany, which was the company's original name from 1903 to 1919.MERALCO is the Metro Manila's only...
until the former's closure in 1994. The project of the power plant was named for James Chapman Rockwell, the first president of MERALCO. The lot is surrounded by J.P. Rizal Avenue to the north, where it faces the Pasig River
Pasig River
The Pasig River is a river in the Philippines that connects Laguna de Bay to Manila Bay. Stretching for , it is lined by Metro Manila on each side...
, Estrella Street to the east, Rockwell Drive to the south, and R. Palma Street to the west.

Rockwell Center began its construction in 1998. Its centerpiece, the Power Plant Mall, opened in December 2000.

Features of the Rockwell Center include high-rise office buildings, condominiums, a school, and a shopping mall. Among the plans for the area is the Lopez Centre
Lopez Centre
The Lopez Centre is a proposed building that will rise at a one-hectare area at JP Rizal, Rockwell Center, Makati City. It was launched in 2008 as a mixed-use building that has 50 floors. It would be the future headquarters of several companies owned by the Lopez family. The tower is named after...
, proposed to have a height of over 1000 feet, which would make it the country's tallest building.