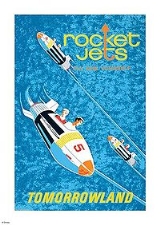 The Rocket Jets remained in their place above the former PeopleMover station as the Observatron, a sculpture that was intended to spin and play music every fifteen minutes. The rockets were replaced by satellite dishes and the Saturn V
Saturn V
The Saturn V was an American human-rated expendable rocket used by NASA's Apollo and Skylab programs from 1967 until 1973. A multistage liquid-fueled launch vehicle, NASA launched 13 Saturn Vs from the Kennedy Space Center, Florida with no loss of crew or payload...
rocket in the center was replaced by a laser-beam. However, the Observatron often malfunctioned, as the machinery was built to operate more frequently and to carry the rockets, rather than the satellite dishes they were replaced with. It appeared to have mechanical issues, sometimes only playing music every 15 minutes, or not doing anything at all.

This maintenance sparked speculation among the Disney fan community that the old Rocket Jets may return to their former spot atop the PeopleMover platform.

The Saturn V rocket that the rockets were attached to was sold on eBay
EBay
eBay Inc. is an American internet consumer-to-consumer corporation that manages eBay.com, an online auction and shopping website in which people and businesses buy and sell a broad variety of goods and services worldwide...
by Disney Auction in 2005. One remains on display, along with Skyway
Skyway (Disney)
The Skyway was a gondola lift attraction at Disneyland, at the Magic Kingdom, and at Tokyo Disneyland. Since all versions of this attraction took riders back and forth between Fantasyland and Tomorrowland, the route from Tomorrowland was called Skyway to Fantasyland, and the route from Fantasyland...
gondolas, in "Little Green Men Store Command" with a space ranger design. During Disneyland's 50th anniversary, one of the satellite dishes was replaced by a 50 Mickey Mouse
Mickey Mouse
Mickey Mouse is a cartoon character created in 1928 by Walt Disney and Ub Iwerks at The Walt Disney Studio. Mickey is an anthropomorphic black mouse and typically wears red shorts, large yellow shoes, and white gloves...
head.

The Rocket Jets appear in a scene from the Disney animation Meet the Robinsons
Meet the Robinsons
Meet the Robinsons is a 2007 American computer-animated family film produced by Walt Disney Animation Studios and released by Walt Disney Pictures on March 30, 2007. The forty-seventh animated feature in the Walt Disney Animated Classics, the film was released in both the United States and the...
as well as another Disneyland attraction, Space Mountain. This area is known as "Todayland".http://www.orange.co.uk/entertainment/film/meettherobinsons/27374.htm?linkfrom=%3C!--linkfromvariable--%3E&link=link_3&article=entertainmentfilmmeettherobinsonsmorelinks
The source of this article is wikipedia, the free encyclopedia.  The text of this article is licensed under the GFDL.