Encyclopedia
A rocket-powered aircraft or rocket plane is an aircraft
Aircraft
An aircraft is a vehicle that is able to fly by gaining support from the air, or, in general, the atmosphere of a planet. An aircraft counters the force of gravity by using either static lift or by using the dynamic lift of an airfoil, or in a few cases the downward thrust from jet engines.Although...
that uses a rocket
Rocket
A rocket is a missile, spacecraft, aircraft or other vehicle which obtains thrust from a rocket engine. In all rockets, the exhaust is formed entirely from propellants carried within the rocket before use. Rocket engines work by action and reaction...
for propulsion, sometimes in addition to airbreathing jet engine
Jet engine
A jet engine is a reaction engine that discharges a fast moving jet to generate thrust by jet propulsion and in accordance with Newton's laws of motion. This broad definition of jet engines includes turbojets, turbofans, rockets, ramjets, pulse jets...
s. Rocket planes can achieve much higher speeds than similarly sized jet aircraft, but typically for at most a few minutes of powered operation, followed by a glide
Gliding (flight)
Gliding flight is heavier-than-air flight without the use of thrust. It is employed by gliding animals and by aircraft such as gliders. The most common human application of gliding flight is in sport and recreation using aircraft designed for this purpose...
. Unhindered by the need for oxygen from the atmosphere they are suitable for very high altitude flight. They are also capable of delivering much higher acceleration and shorter takeoffs.

Rockets have been used simply to assist the main propulsion in the form of Jet Assisted Take Off
JATO
JATO is an acronym for jet-fuel assisted take off. It is a system for helping overloaded aircraft into the air by providing additional thrust in the form of small rockets....
(JATO) also known as "Rocket Assisted Take Off" (RATO). Not all rocket planes are of the conventional takeoff like "normal" aircraft. Some types have been air-launched from another plane, while other types have taken off vertically - nose in the air and tail to the ground ("tail-sitters
Tailsitter
A tailsitter is a type of VTOL aircraft that launches and lands on its tail. One of the most famous examples of this type of aircraft is the Ryan X-13 Vertijet. Among the propeller-driven versions were the Lockheed XFV, and the Convair XFY Pogo. Studies and wind tunnel models were made of a...
"). It is also possible, that rocket planes launch vertically without changing their orientation.

Because of the heavy propellant use and the various practical difficulties of operating rockets, the majority of rocket planes have been built for experimental use, as interceptor
Interceptor aircraft
An interceptor aircraft is a type of fighter aircraft designed specifically to prevent missions of enemy aircraft, particularly bombers and reconnaissance aircraft. Interceptors generally rely on high speed and powerful armament in order to complete their mission as quickly as possible and set up...
fighters and space aircraft. 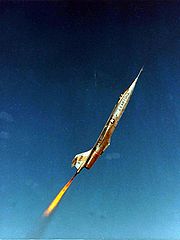 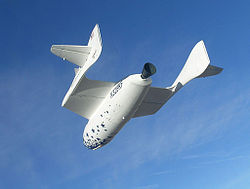 The first rocket-powered aircraft was the Lippisch Ente, flown in 1928.

The Heinkel He 176 was the world’s first aircraft to be propelled solely by a liquid-fuelled rocket
Rocket engine
A rocket engine, or simply "rocket", is a jet engineRocket Propulsion Elements; 7th edition- chapter 1 that uses only propellant mass for forming its high speed propulsive jet. Rocket engines are reaction engines and obtain thrust in accordance with Newton's third law...
, making its first powered flight on 20 June 1939 with Erich Warsitz
Erich Warsitz
Erich Warsitz was a German test pilot of the 1930s. He held the rank of Flight-Captain in the Luftwaffe and was selected by the Reich Air Ministry as chief test pilot at Peenemünde West...
at the controls.

The first rocket planes ever to be mass-produced were the Messerschmitt Me 163
Messerschmitt Me 163
The Messerschmitt Me 163 Komet, designed by Alexander Lippisch, was a German rocket-powered fighter aircraft. It is the only rocket-powered fighter aircraft ever to have been operational. Its design was revolutionary, and the Me 163 was capable of performance unrivaled at the time. Messerschmitt...
in 1944, one of several German
Germany
Germany , officially the Federal Republic of Germany , is a federal parliamentary republic in Europe. The country consists of 16 states while the capital and largest city is Berlin. Germany covers an area of 357,021 km2 and has a largely temperate seasonal climate...
World War II
World War II
World War II, or the Second World War , was a global conflict lasting from 1939 to 1945, involving most of the world's nations—including all of the great powers—eventually forming two opposing military alliances: the Allies and the Axis...
attempts at rocket-powered aircraft. Other German experimental rocket-powered aircraft included the Bachem Ba 349
Bachem Ba 349
The Bachem Ba 349 Natter was a World War II German point-defence rocket powered interceptor, which was to be used in a very similar way to a manned surface-to-air missile. After vertical take-off, which eliminated the need for airfields, the majority of the flight to the Allied bombers was to be...
vertical takeoff manned rocket interceptor aircraft. The antipodal bomber was planned by the Germans late in World War II, however later calculations showed that it would not have worked, and would have been destroyed during reentry. The Japanese also produced approximately 850 Yokosuka MXY7 Ohka rocket-powered suicide attack aircraft in World War II.

Other experimental aircraft included the Russian Bereznyak-Isayev BI-1
Bereznyak-Isayev BI-1
Soviet research and development of rocket-powered aircraft began with Sergey Korolev's GIRD-6 project in 1932. His interest in stratospheric flight was also shared by Marshal Mikhail Tukhachevsky who supported this early work...
that flew in 1942 while The Northrop XP-79 began with rocket engines in its initial design.

In 1946 the rocket-powered Bell X-1
Bell X-1
The Bell X-1, originally designated XS-1, was a joint NACA-U.S. Army/US Air Force supersonic research project built by Bell Aircraft. Conceived in 1944 and designed and built over 1945, it eventually reached nearly 1,000 mph in 1948...
was the first aircraft to break the speed of sound in level flight and the first of a seris of NACA/NASA rocket-powered aircraft. The North American X-15
North American X-15
The North American X-15 rocket-powered aircraft/spaceplane was part of the X-series of experimental aircraft, initiated with the Bell X-1, that were made for the USAAF/USAF, NACA/NASA, and the USN. The X-15 set speed and altitude records in the early 1960s, reaching the edge of outer space and...
and X-15A2 designs were used for around a decade and eventually reached Mach
Mach number
Mach number is the speed of an object moving through air, or any other fluid substance, divided by the speed of sound as it is in that substance for its particular physical conditions, including those of temperature and pressure...
6.7 and over 100 km in altitude.

In the 1950s the British developed mixed power designs to cover the performance gap that existed in then-current turbojet designs. The rocket was the main engine for delivering the speed and height required for high speed interception of high level bombers and the turbojet gave increased fuel economy in other parts of flight, most notably to make sure the aircraft was able to make a powered landing rather than risking an unpredictable gliding return. The Saunders-Roe SR.53 was a successful design and was due to be developed into production when economics forced curtailment of most British aircraft programmes in the late 1950s. The advancement of the turbojet engine output, the advent of missiles, and advances in radar had made a return to mixed power unnecessary.

The development of Soviet rockets and satellites was the driving force behind the development of NASA's space program. In the early 1960s, American research into the Boeing X-20 Dyna-Soar spaceplane was cancelled due to lack of purpose; later the studies contributed to the Space Shuttle
Space Shuttle
The Space Shuttle was a manned orbital rocket and spacecraft system operated by NASA on 135 missions from 1981 to 2011. The system combined rocket launch, orbital spacecraft, and re-entry spaceplane with modular add-ons...
. Another similar program was ISINGLASS
Isinglass
Isinglass is a substance obtained from the dried swim bladders of fish. It is a form of collagen used mainly for the clarification of wine and beer. It can also be cooked into a paste for specialized gluing purposes....
which was to be a rocket plane launched from a Boeing B-52 Stratofortress carrier, which was intended to achieve Mach 22, but this was never funded. ISINGLASS was intended to overfly the USSR. No images of the vehicle configuration have been released.