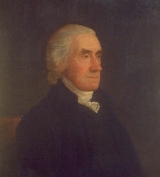 He was born at Boston, Massachusetts
Boston
Boston is the capital of and largest city in Massachusetts, and is one of the oldest cities in the United States. The largest city in New England, Boston is regarded as the unofficial "Capital of New England" for its economic and cultural impact on the entire New England region. The city proper had...
, on March 11, 1731. He was one of five children of the Rev. Thomas Paine, Harvard College 1717, who was pastor of the Congregational church at Weymouth, Massachusetts
Weymouth, Massachusetts
The Town of Weymouth is a city in Norfolk County, Massachusetts, United States. As of the 2010 census, Weymouth had a total population of 53,743. Despite its city status, it is formally known as the Town of Weymouth...
until 1734 but moved his family to Boston in 1730 and subsequently became a merchant there;
and Eunice Treat, the daughter of Rev. Samuel Treat, Harvard College 1669, and Abigail Willard. Rev. Samuel Treat and his father Robert Treat
Robert Treat
Robert Treat was an American colonial leader, militia officer and governor of Connecticut between 1683 and 1698....
, were the principle founders of Newark, New Jersey
History of Newark, New Jersey
Newark, New Jersey, was founded in 1666 by Connecticut Puritans led by Robert Treat from the New Haven Colony. The New Haven colonists had been forced out of power for sheltering the judges who had fled to the New Haven Colony after sentencing Charles I of England to death.They sought to establish...
.

He was the great grandson of Reverend Samuel Willard
Samuel Willard
Reverend Samuel Willard was a Colonial clergyman. He was born in Concord, Massachusetts; graduated at Harvard in 1659; and was minister at Groton from 1663 to 1676, whence he was driven by the Indians during King Philip's War. The Reverend Willard was pastor of the Third Church, Boston, from...
, Harvard College 1659, pastor of the Old South Church, Boston, vice-president of Harvard College and the acting president of Harvard College; Robert Treat
Robert Treat
Robert Treat was an American colonial leader, militia officer and governor of Connecticut between 1683 and 1698....
, the lieutenant-governor and governor of Connecticut
Connecticut
Connecticut is a state in the New England region of the northeastern United States. It is bordered by Rhode Island to the east, Massachusetts to the north, and the state of New York to the west and the south .Connecticut is named for the Connecticut River, the major U.S. river that approximately...
for thirty years; prominent in the Charter Oak
Charter Oak
The Charter Oak was an unusually large white oak tree growing, from around the 12th or 13th century until 1856, on what the English colonists named Wyllys Hyll, in Hartford, Connecticut, USA...
incident and as commander of the Connecticut forces in protecting the settlers of western Massachusetts during King Philip's War
King Philip's War
King Philip's War, sometimes called Metacom's War, Metacomet's War, or Metacom's Rebellion, was an armed conflict between Native American inhabitants of present-day southern New England and English colonists and their Native American allies in 1675–76. The war is named after the main leader of the...
; and the great great grandson of Richard Treat
Richard Treat
Richard Treat was an early New England settler and a Patentee of the Royal Charter of Connecticut, 1662-Early life and ancestors:...
(or Trott) an early New England settler and a Patentee of the Royal Charter of Connecticut, 1662 and Stephen Hopkins (settler)
Stephen Hopkins (settler)
Stephen Hopkins , was a tanner and merchant who was one of the passengers on the Mayflower in 1620, settling in Plymouth Colony. Hopkins was recruited by the Merchant Adventurers to provide governance for the colony as well as assist with the colony's ventures...
, a tanner and merchant who was one of the passengers aboard the Mayflower
Mayflower
The Mayflower was the ship that transported the English Separatists, better known as the Pilgrims, from a site near the Mayflower Steps in Plymouth, England, to Plymouth, Massachusetts, , in 1620...
on the voyage to North America
North America
North America is a continent wholly within the Northern Hemisphere and almost wholly within the Western Hemisphere. It is also considered a northern subcontinent of the Americas...
landing at Plymouth, Massachusetts in 1620.

Paine attended the Boston Latin School
Boston Latin School
The Boston Latin School is a public exam school founded on April 23, 1635, in Boston, Massachusetts. It is both the first public school and oldest existing school in the United States....
, and at the early age of fourteen, he became a member of Harvard College
Harvard College
Harvard College, in Cambridge, Massachusetts, is one of two schools within Harvard University granting undergraduate degrees...
from which institution he graduated from in 1749 at age 18. He then was engaged in teaching school for several years back at the Boston Latin and at Lunenburg, Massachusetts
Lunenburg, Massachusetts
Lunenburg is a town in Worcester County, Massachusetts, United States. The population was 10,086 at the 2010 census.For geographic and demographic information on the census-designated place Lunenburg, please see the article Lunenburg , Massachusetts....
He also attempted a merchant career with journeys to the Carolinas, the Azores, and to Spain, as well as a whaling voyage to Greenland. He began the study of law in 1755 with his mother's cousin in Lancaster, Mass. Another cousin, Col. Samuel Willard, raised a regiment to fight in the French & Indian wars. Paine was unsuccessful in gaining an officer's commission in that regiment and so volunteered to serve as chaplain. When he returned from a brief military campaign to Lake George (the Crown Point Expedition), he did some occasional preaching and returned to his legal studies. In 1756 he returned to Boston to continue his legal preparations with Samuel Prat, and he was admitted to the bar in 1757. He first first considered establishing his law practice at Portland
Portland, Maine
Portland is the largest city in Maine and is the county seat of Cumberland County. The 2010 city population was 66,194, growing 3 percent since the census of 2000...
(then part of Massachusetts but now in Maine), but instead 1761 moved to Taunton, Massachusetts
Taunton, Massachusetts
Taunton is a city in Bristol County, Massachusetts, United States. It is the seat of Bristol County and the hub of the Greater Taunton Area. The city is located south of Boston, east of Providence, north of Fall River and west of Plymouth. The City of Taunton is situated on the Taunton River...
, until moving back to Boston in 1780.

He married, March 15, 1770, Sally Cobb, the daughter of Thomas and Lydia (Leonard) Cobb and a sister of General David Cobb (Massachusetts)
David Cobb (Massachusetts)
David Cobb was a Massachusetts physician, military officer, jurist, and politician who served as a U.S. Congressman for the At-large District of Massachusetts.-Biography:...
and cousin of Samuel Wilde
Samuel Wilde
Samuel Wilde was a Justice on the Supreme Judicial Court of Massachusetts.Samuel Sumner Wilde was a prominent attorney in Massachusetts and served as a justice on the Supreme Judicial Court. He was elected as a representative to the 1814 secessionist Hartford Convention....
. She was born May 15, 1744, died June 6, 1816. They were the parents of eight children:

In 1768 he was a delegate to the provincial convention which was called to meet in Boston and along with Samuel Quincy conducted the prosecution of Captain Thomas Preston and his British soldiers following the Boston Massacre
Boston Massacre
The Boston Massacre, called the Boston Riot by the British, was an incident on March 5, 1770, in which British Army soldiers killed five civilian men. British troops had been stationed in Boston, capital of the Province of Massachusetts Bay, since 1768 in order to protect and support...
of March 5, 1770; John Adams was opposing counsel and his arguments won the jury's sway, and most of the troops were let off.

He returned to Massachusetts at the end of December 1776 and there was speaker of the Massachusetts House of Representatives in 1777, a member of the executive council
Massachusetts Governor's Council
The Massachusetts Governor's Council is a governmental body that provides advice and consent in certain matters such as judicial nominations, pardons, and commutations to the Governor of Massachusetts...
in 1779, a member of the committee that drafted the constitution of 1780. He was Massachusetts Attorney General from 1777 to 1790 and prosecuted the treason trials following Shays' Rebellion
Shays' Rebellion
Shays' Rebellion was an armed uprising in central and western Massachusetts from 1786 to 1787. The rebellion is named after Daniel Shays, a veteran of the American Revolutionary War....
. He later served as a justice of the state supreme court from 1790 to 1804 when he retired. When he died at the age of 83 in 1814 he was buried in the Granary Burying Ground in Boston, Massachusetts. A statue to commemorate him was erected in the Church Green area of Taunton.

Robert Treat Paine was a Congregationalist and a devout Christian. When his church, The First Church of Boston, moved into Unitarianism, Paine followed that path.

Some of his notable descendants include;

Paine is featured in the 2008 miniseries John Adams. In episode one, Paine (played by Brennan Brown
Brennan Brown
Brennan Brown is an American actor, perhaps best known for playing Orange's spoof film board executive Mr. Dresden in the long-running series of UK cinema ads.-Orange Wednesday adverts:...
) prosecutes the British soldiers involved in the Boston Massacre. After losing in court, Paine and some colleagues visit Adams at home and attempt to enlist his support and use his credibility as an impartial party in taking a stand against the British. Paine admires Adams' ability to be impartial even while he detests the British stationed in Boston.