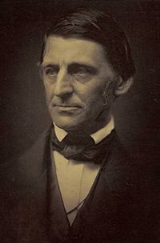 Overview
Ralph Waldo Emerson was an American essayist, lecturer, and poet
Poet
A poet is a person who writes poetry. A poet's work can be literal, meaning that his work is derived from a specific event, or metaphorical, meaning that his work can take on many meanings and forms. Poets have existed since antiquity, in nearly all languages, and have produced works that vary...
, who led the Transcendentalist
Transcendentalism
Transcendentalism is a philosophical movement that developed in the 1830s and 1840s in the New England region of the United States as a protest against the general state of culture and society, and in particular, the state of intellectualism at Harvard University and the doctrine of the Unitarian...
movement of the mid-19th century. He was seen as a champion of individualism
Individualism
Individualism is the moral stance, political philosophy, ideology, or social outlook that stresses "the moral worth of the individual". Individualists promote the exercise of one's goals and desires and so value independence and self-reliance while opposing most external interference upon one's own...
and a prescient critic of the countervailing pressures of society, and he disseminated his thoughts through dozens of published essays and more than 1,500 public lectures across the United States.

Emerson gradually moved away from the religious and social beliefs of his contemporaries, formulating and expressing the philosophy of Transcendentalism in his 1836 essay, Nature.

How did Emerson contribute to the Transcendentalist movement?

How did Emerson feel about slavery?
More

The sublime is excited in me by the great stoical doctrine, Obey thyself.

The man who renounces himself, comes to himself.

None believeth in the soul of man, but only in some man or person old and departed.

The imitator dooms himself to hopeless mediocrity. The inventor did it because it was natural to him, and so in him it has a charm. In the imitator something else is natural, and he bereaves himself of his own beauty, to come short of another man's.

I fancy I need more than another to speak (rather than write), with such a formidable tendency to the lapidary style. I build my house of boulders.

Literature is the effort of man to indemnify himself for the wrongs of his condition.