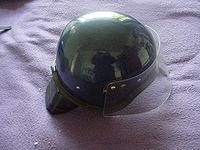 A riot protection helmet is a type of helmet
Helmet
A helmet is a form of protective gear worn on the head to protect it from injuries.Ceremonial or symbolic helmets without protective function are sometimes used. The oldest known use of helmets was by Assyrian soldiers in 900BC, who wore thick leather or bronze helmets to protect the head from...
designed for law enforcement
Law enforcement agency
In North American English, a law enforcement agency is a government agency responsible for the enforcement of the laws.Outside North America, such organizations are called police services. In North America, some of these services are called police while others have other names In North American...
and military
Military
A military is an organization authorized by its greater society to use lethal force, usually including use of weapons, in defending its country by combating actual or perceived threats. The military may have additional functions of use to its greater society, such as advancing a political agenda e.g...
use to protect its wearer's head, face and eyes from handheld melee weapons, and thrown projectiles such as bricks, as may be met in riot control
Riot control
Riot control refers to the measures used by police, military, or other security forces to control, disperse, and arrest civilians who are involved in a riot, demonstration, or protest. Law enforcement officers or soldiers have long used non-lethal weapons such as batons and whips to disperse crowds...
. Many modern riot squad helmets are reinforced with materials that will protect the wearer from dangerous substances such as acids or industrial chemicals.

There have been rare cases of riot protection helmets being worn to protect against objects blown by storm wind, for example in England in the 18 January 2007 gale.

The simplest form is a hard shell with reinforced padding, and a chinstrap and a hinge-up (usually polycarbonate
Polycarbonate
PolycarbonatePhysical PropertiesDensity 1.20–1.22 g/cm3Abbe number 34.0Refractive index 1.584–1.586FlammabilityV0-V2Limiting oxygen index25–27%Water absorption – Equilibrium0.16–0.35%Water absorption – over 24 hours0.1%...
) visor
Visor
A visor is a surface that protects the eyes, such as shading them from the sun or other bright light or protecting them from objects....
, as in this image. These riot protection helmet visors are usually curved sideways and straight up-and-down, not curved both ways like on the older type of motorcycle helmet
Motorcycle helmet
A motorcycle helmet is a type of protective headgear used by motorcycle riders. The primary goal of a motorcycle helmet is motorcycle safety - to protect the rider's head during impact, thus preventing or reducing head injury or saving the rider's life...
. One accessory is a back-of-the-neck protector.

An example of a more complicated riotsquad helmet is a French CRS
Compagnies Républicaines de Sécurité
The Compagnies Républicaines de Sécurité are the riot control forces and general reserve of the French National Police. The CRS were created on 8 December 1944 and the first units were organised by 31 January 1945. The CRS were reorganized in 1948...
helmet which has two visors: the outer visor is clear and hinges up outside the helmet; the inner visor hinges up between two layers of the helmet and has a finish which can be seen through from inside but from outside looks like opaque polished brass
Brass
Brass is an alloy of copper and zinc; the proportions of zinc and copper can be varied to create a range of brasses with varying properties.In comparison, bronze is principally an alloy of copper and tin...
.

Other possible accessories include built-in radio
Radio
Radio is the transmission of signals through free space by modulation of electromagnetic waves with frequencies below those of visible light. Electromagnetic radiation travels by means of oscillating electromagnetic fields that pass through the air and the vacuum of space...
microphone
Microphone
A microphone is an acoustic-to-electric transducer or sensor that converts sound into an electrical signal. In 1877, Emile Berliner invented the first microphone used as a telephone voice transmitter...
and earpieces.