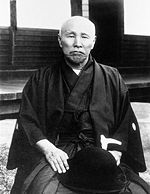 The Kaishintō was founded by Ōkuma Shigenobu
Okuma Shigenobu
Marquis ; was a statesman in the Empire of Japan and the 8th and 17th Prime Minister of Japan...
on 16 April 1882, with the assistance of Yano Ryūsuke, Inukai Tsuyoshi
Inukai Tsuyoshi
was a Japanese politician and the 29th Prime Minister of Japan from 13 December 1931 to 15 May 1932.-Early life:Inukai was born to a former samurai family of the Niwase Domain, in Niwase village, Bizen Province , and was a graduate of Keio Gijuku in Tokyo. In his early career, he worked as a...
and Ozaki Yukio. It received financial backing by the Mitsubishi
Mitsubishi
The Mitsubishi Group , Mitsubishi Group of Companies, or Mitsubishi Companies is a Japanese multinational conglomerate company that consists of a range of autonomous businesses which share the Mitsubishi brand, trademark and legacy...
zaibatsu
Zaibatsu
is a Japanese term referring to industrial and financial business conglomerates in the Empire of Japan, whose influence and size allowed for control over significant parts of the Japanese economy from the Meiji period until the end of World War II.-Terminology:...
, and had strong support from the Japanese press, and urban intellectuals.

The Kaishintō pursued a moderate approach, calling for a British-style
United Kingdom
The United Kingdom of Great Britain and Northern IrelandIn the United Kingdom and Dependencies, other languages have been officially recognised as legitimate autochthonous languages under the European Charter for Regional or Minority Languages...
constitutional monarchy
Constitutional monarchy
Constitutional monarchy is a form of government in which a monarch acts as head of state within the parameters of a constitution, whether it be a written, uncodified or blended constitution...
within the framework of a parliamentary democracy. In a speech Ōkuma gave at the inauguration of the party, he emphasized the symbolic role of the monarch in the type of government he envisioned. He also argued that those extremists who supported having the emperor directly involved political decision making were in fact endangering the very existence of the Imperial institution.

In the first General Election of 1890
Japanese general election, 1890
was the Empire of Japan’s first general election for members of the House of Representatives of the Diet of Japan. It was the first example of a popularly elected national assembly in Asia -History and background:...
, the Kaishintō won 46 seats to the Lower House of the Diet of Japan
Diet of Japan
The is Japan's bicameral legislature. It is composed of a lower house, called the House of Representatives, and an upper house, called the House of Councillors. Both houses of the Diet are directly elected under a parallel voting system. In addition to passing laws, the Diet is formally...
thus becoming the second largest party after the Jiyūtō.

Afterwards, the Kaishintō adopted an increasingly nationalistic foreign policy, and in March 1896 merged with several smaller nationalist parties to form the Shimpotō
Shimpoto
' was a short-lived political party in Meiji period Japan.The Shimpotō was founded by Ōkuma Shigenobu in March 1896, as a merger of the Rikken Kaishintō and minor political parties to offset a temporary alliance between Ōkuma's rival, Itō Hirobumi and the Jiyuto.In June 1898, the Shimpotō merged...
.
The source of this article is wikipedia, the free encyclopedia.  The text of this article is licensed under the GFDL.