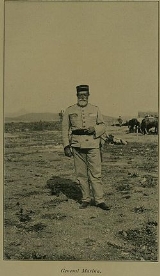 Encyclopedia
The Second Melillan campaign was a conflict
War
War is a state of organized, armed, and often prolonged conflict carried on between states, nations, or other parties typified by extreme aggression, social disruption, and usually high mortality. War should be understood as an actual, intentional and widespread armed conflict between political...
in 1909 and 1910 in Morocco
Morocco
Morocco , officially the Kingdom of Morocco , is a country located in North Africa. It has a population of more than 32 million and an area of 710,850 km², and also primarily administers the disputed region of the Western Sahara...
around Melilla
Melilla
Melilla is a autonomous city of Spain and an exclave on the north coast of Morocco. Melilla, along with the Spanish exclave Ceuta, is one of the two Spanish territories located in mainland Africa...
. The fighting involved local Rifains and the Spanish
Spain
Spain , officially the Kingdom of Spain languages]] under the European Charter for Regional or Minority Languages. In each of these, Spain's official name is as follows:;;;;;;), is a country and member state of the European Union located in southwestern Europe on the Iberian Peninsula...
Army. 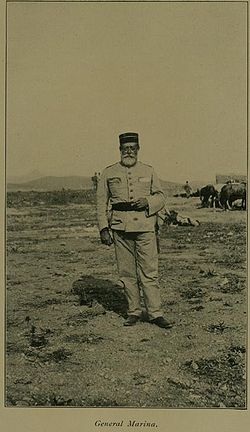 After having lost the Spanish-American War
Spanish-American War
The Spanish–American War was a conflict in 1898 between Spain and the United States, effectively the result of American intervention in the ongoing Cuban War of Independence...
in 1898, Spain sought compensation for its lost prestige by expanding its influence in Northern Africa. Spain had an agreement with Muley Mohamet, a local tribesman, to exploit mines around Melilla, against the wishes of Sultan Abd al-Aziz
Abdelaziz of Morocco
Abdelaziz of Morocco , also known as Mulai Abd al-Aziz IV, served as the Sultan of Morocco from 1894 at the age of sixteen until he was deposed in 1908. He succeeded his father Hassan I of Morocco...
and other local tribes. On August 8, 1908, the mines were attacked by Rifians a first time without causing any casualties, but Muley Mohamet was apprehended and sent to Fez
Fes, Morocco
Fes or Fez is the second largest city of Morocco, after Casablanca, with a population of approximately 1 million . It is the capital of the Fès-Boulemane region....
, where he died in prison. Now without support in hostile territory, General José Marina y Vega, military commander of Melilla, asked Madrid
Madrid
Madrid is the capital and largest city of Spain. The population of the city is roughly 3.3 million and the entire population of the Madrid metropolitan area is calculated to be 6.271 million. It is the third largest city in the European Union, after London and Berlin, and its metropolitan...
for reinforcements to protect these exploitations, but none were sent. On July 9, 1909, a new attack occurred and six Spanish railway workers were killed by tribesmen.

As a result of these deaths, Prime Minister Antonio Maura Montaner
Antonio Maura Montaner
Antonio Maura y Montaner was Prime Minister of Spain on five separate occasions: 5 December 1903-16 December 1904, 25 January 1907-21 October 1909, 22 March 1918-9 November 1918, 14 April 1919-20 July 1919, and 13 August 1921-8 March 1922....
increased the Spanish garrison at Melilla from 5,000 men to 22,000 in preparation for an offensive. All the Spanish forces involved were conscripts; at this stage, Spain had neither professional troops
Spanish Legion
The Spanish Legion , formerly Spanish Foreign Legion, is an elite unit of the Spanish Army and Spain's Rapid Reaction Force. Founded as the Tercio de Extranjeros , it was originally intended as a Spanish equivalent of the French Foreign Legion, but in practice it recruited almost exclusively...
, nor indigenous troops
Regulares
The Fuerzas Regulares Indígenas , known simply as the Regulares , were the volunteer infantry and cavalry units of the Spanish Army recruited in Spanish Morocco. They consisted of Moroccans officered by Spaniards...
under arms. The Spanish army was poorly trained and equipped and lacked basic maps.

The next day, the Spanish troops were shot at by Francs-tireurs
Francs-tireurs
Francs-tireurs – literally "free shooters" – was used to describe irregular military formations deployed by France during the early stages of the Franco-Prussian War...
and skirmishes occurred near Melilla. General Marina decided to post six companies at Ait Aixa, under command of Colonel Álvarez Cabrera. They left Melilla at nightfall but got lost and, in the morning, found themselves in the Alfer Canyon, where they were decimated by gunfire from the heights. Colonel Cabrera and 26 men were killed, and 230 were wounded.

On June 26, the Spanish suffered a second defeat at the Lobo Canyon, when Marina sent another force under General Pintos to protect Segunda Caseta. In this ambush, General Pintos and 153 men were killed and 600 were wounded.

After this disaster, all Spanish military operations were stopped, troop-levels were raised to 35,000 men and heavy artillery was brought over from Spain.

By the end of August, the Spanish launched a new attack, and due to overwhelming forces, by January 1910, they had subdued most of the eastern tribes. The Spanish continued to expand their Melilla
Melilla
Melilla is a autonomous city of Spain and an exclave on the north coast of Morocco. Melilla, along with the Spanish exclave Ceuta, is one of the two Spanish territories located in mainland Africa...
enclave to encompass the area from Cape Tres Forcas
Cape Tres Forcas
Cape Tres Forcas is the commonly used Anglicized name for a headland on the Mediterranean coast of Morocco and Spain.The Catalan name , the French Name , and the Arabic name all signify the same thing, the Cape of Three Forks.The cape is a large mountainous promontory of North Africa into the...
to the southern inlets of Mar Chica. However, this was achieved at the cost of 2,517 casualties.