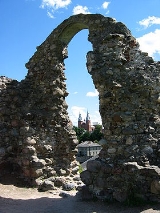 Encyclopedia
In the 19th century, the population of Rēzekne was 2/3 Jewish. As a result of the Pale of Settlement
Pale of Settlement
The Pale of Settlement was the term given to a region of Imperial Russia, in which permanent residency by Jews was allowed, and beyond which Jewish permanent residency was generally prohibited...
many Jews settled in Latgalia and were confined to the cities. The remainder of the population included Poles, Germans, Russians, and an extreme minority of native Latgalians
Latgalians (modern)
This article is about modern ethnic group of Latvians inhabiting or coming from Latgalia. For ancient Baltic people see Latgalians.In Latvian, latgalieši refers to the ethnic Latvians of Latgalia, which has been developing separately from the rest of ethnic Latvia until 1917.In Latgalian language,...
. With the economic development and the arrival of the railroad, the population grew steadily, reaching 23,000 by the eve of World War I
World War I
World War I , which was predominantly called the World War or the Great War from its occurrence until 1939, and the First World War or World War I thereafter, was a major war centred in Europe that began on 28 July 1914 and lasted until 11 November 1918...
.

After Latvia's independence in 1918, the population of ethnic Latvians in the city grew substantially, but Jews still made up slightly over a quarter of the population (25.4% in 1935.) In 1939, the population was 13,000. During World War II
World War II
World War II, or the Second World War , was a global conflict lasting from 1939 to 1945, involving most of the world's nations—including all of the great powers—eventually forming two opposing military alliances: the Allies and the Axis...
, the Jewish population was annihilated, and most other residents were either deported to Gulag
Gulag
The Gulag was the government agency that administered the main Soviet forced labor camp systems. While the camps housed a wide range of convicts, from petty criminals to political prisoners, large numbers were convicted by simplified procedures, such as NKVD troikas and other instruments of...
camps in Siberia, or fled westwards. As a result, the post-war population was 5,000.

As part of the Soviet Union's policy of Russification
Russification
Russification is an adoption of the Russian language or some other Russian attributes by non-Russian communities...
, many ethnic Slavs, such as Russians and Belarusians, moved to the city. By 1989, Russians accounted for the majority of the population, at 53%. After Latvia's independence in 1991, however, many citizens repatriated to Russia
Russia
Russia or , officially known as both Russia and the Russian Federation , is a country in northern Eurasia. It is a federal semi-presidential republic, comprising 83 federal subjects...
.

In 1991, the population of Rēzekne was 43,156. Since then, the population has decreased to 35,883 (2008), caused by a low birth rate, an old population (the average age in Rēzekne is 40.3 years) (see ageing of Europe), and a high rate of emigration to larger cities such as Riga
Riga
Riga is the capital and largest city of Latvia. With 702,891 inhabitants Riga is the largest city of the Baltic states, one of the largest cities in Northern Europe and home to more than one third of Latvia's population. The city is an important seaport and a major industrial, commercial,...
. 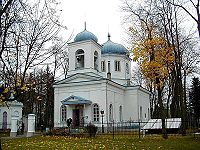 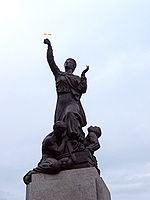 Due to Rēzekne's multi-ethnic character throughout the centuries, many religious communities have settled in the city. Ethnic differences were often distinguished on religious lines; the Germans brought Christianity
Christianity
Christianity is a monotheistic religion based on the life and teachings of Jesus as presented in canonical gospels and other New Testament writings...
to Latvia in the 13th century, as well as Lutheranism
Lutheranism
Lutheranism is a major branch of Western Christianity that identifies with the theology of Martin Luther, a German reformer. Luther's efforts to reform the theology and practice of the church launched the Protestant Reformation...
during the Reformation Period. The Polish influence over Latgalia in the 17th and 18th centuries strengthened Catholicism
Catholicism
Catholicism is a broad term for the body of the Catholic faith, its theologies and doctrines, its liturgical, ethical, spiritual, and behavioral characteristics, as well as a religious people as a whole....
among the native Latgalians
Latgalians (modern)
This article is about modern ethnic group of Latvians inhabiting or coming from Latgalia. For ancient Baltic people see Latgalians.In Latvian, latgalieši refers to the ethnic Latvians of Latgalia, which has been developing separately from the rest of ethnic Latvia until 1917.In Latgalian language,...
. Incoming populations of Russian Old Believers
Old Believers
In the context of Russian Orthodox church history, the Old Believers separated after 1666 from the official Russian Orthodox Church as a protest against church reforms introduced by Patriarch Nikon between 1652–66...
introduced Russian Orthodoxy
Russian Orthodox Church
The Russian Orthodox Church or, alternatively, the Moscow Patriarchate The ROC is often said to be the largest of the Eastern Orthodox churches in the world; including all the autocephalous churches under its umbrella, its adherents number over 150 million worldwide—about half of the 300 million...
, and up to the 1940s, Rēzekne had a very large Jewish population, and therefore, many synagogues.

The Catholic Cathedral "Vissvētā Jēzus Sirds" (Sacred Heart of Jesus), (built 1893-1914) dominates Rēzekne's skyline looking from the castle hill. "Vissvētā Jēzus Sirds" was built on the foundations of an older wooden church, dating from the 17th century, that burned down. The other Catholic church, "Sāpju Dievmāte" (Our Lady of Sorrows) is much newer, built from 1935-1939. Other churches include the Old Believers "Svētā Nikolaja" (St. Nicholas), Russian Orthodox "Vissvētākās Dievdzemdētājas piedzimšanas", Lutheran
Lutheranism
Lutheranism is a major branch of Western Christianity that identifies with the theology of Martin Luther, a German reformer. Luther's efforts to reform the theology and practice of the church launched the Protestant Reformation...
"Svētās Trīsvienības" (Holy Trinity), as well as a Baptist
Baptist
Baptists comprise a group of Christian denominations and churches that subscribe to a doctrine that baptism should be performed only for professing believers , and that it must be done by immersion...
church.

The church has an active choir whose members have studied music. A majority of the members work as musicians and enjoy their Sunday singing in the church.

One of the most famous statues in Latvia, known as "Latgales Māra", is found in Rēzekne. It was designed by Leons Tomašickis and first unveiled on September 8, 1939. The bronze statue commemorates the liberation of Latgale from the Bolshevik
Bolshevik
The Bolsheviks, originally also Bolshevists , derived from bol'shinstvo, "majority") were a faction of the Marxist Russian Social Democratic Labour Party which split apart from the Menshevik faction at the Second Party Congress in 1903....
s in January 1920. The central figure, the woman, was nicknamed "Māra" after the ancient Latvian goddess of motherhood, fertility, and the earth (see: Māra
Mara
-Social groups:*Mara people, in northeastern India and western Myanmar* Mara language, a language spoken by Mara people*Mara Salvatrucha, a violent criminal gang in Mexico, Central America, Canada, and the United States...
), while the cross in her outstretched arm symbolizes the deep importance of Catholicism
Catholicism
Catholicism is a broad term for the body of the Catholic faith, its theologies and doctrines, its liturgical, ethical, spiritual, and behavioral characteristics, as well as a religious people as a whole....
to Latgalian culture and complements the pagan symbol "Māra". The words "Vienoti Latvijai" beneath the statue (meaning "United for Latvija") symbolize Latgale's decision to reunite with the rest of Latvia during the Republic's formation in 1918, even though Latgale had been politically separated from the rest of Latvia for 300 years.

Because the statue symbolized Latgalian nationalism, the Soviets toppled it in November 1940 during the Soviet occupation of Latvia
Soviet occupation of Latvia in 1940
The Soviet occupation of Latvia in 1940 refers, according to the European Court of Human Rights, the Government of Latvia, the State Department of the United States of America, and the European Union, to the military occupation of the Republic of Latvia by the Soviet Union ostensibly under the...
. The local residents restored it on August 22, 1943, after which the Soviet government, in June 1950, pulled it down again. The fate of the original statue is unknown. Using old photographs and blueprints, the statue was reconstructed after Latvia reachieved its independence in 1991, and unveiled on August 13, 1992. Though Latgale was greatly changed under Soviet rule, Latgales Māra still symbolizes a Catholic Latgale united with Latvia, free of foreign domination.

Częstochowa
Czestochowa
Częstochowa is a city in south Poland on the Warta River with 240,027 inhabitants . It has been situated in the Silesian Voivodeship since 1999, and was previously the capital of Częstochowa Voivodeship...
, Poland
Poland
Poland , officially the Republic of Poland , is a country in Central Europe bordered by Germany to the west; the Czech Republic and Slovakia to the south; Ukraine, Belarus and Lithuania to the east; and the Baltic Sea and Kaliningrad Oblast, a Russian exclave, to the north...

Vitebsk
Vitebsk
Vitebsk, also known as Viciebsk or Vitsyebsk , is a city in Belarus, near the border with Russia. The capital of the Vitebsk Oblast, in 2004 it had 342,381 inhabitants, making it the country's fourth largest city...
, Belarus
Belarus
Belarus , officially the Republic of Belarus, is a landlocked country in Eastern Europe, bordered clockwise by Russia to the northeast, Ukraine to the south, Poland to the west, and Lithuania and Latvia to the northwest. Its capital is Minsk; other major cities include Brest, Grodno , Gomel ,...

Arendal
Arendal
is a town and municipality in the county of Aust-Agder, Norway. Arendal belongs to the traditional region of Sørlandet.The town of Arendal is the administrative center the municipality and also of Aust-Agder county...
, Norway
Norway
Norway , officially the Kingdom of Norway, is a Nordic unitary constitutional monarchy whose territory comprises the western portion of the Scandinavian Peninsula, Jan Mayen, and the Arctic archipelago of Svalbard and Bouvet Island. Norway has a total area of and a population of about 4.9 million...