Encyclopedia
The Republic of Mountainous Armenia was a short-lived and unrecognized state in the South Caucasus
South Caucasus
The South Caucasus is a geopolitical region located on the border of Eastern Europe and Southwest Asia also referred to as Transcaucasia, or The Trans-Caucasus...
, roughly corresponding with the territory that is now the present-day Armenia
Armenia
Armenia , officially the Republic of Armenia , is a landlocked mountainous country in the Caucasus region of Eurasia...
n provinces of Vayots Dzor
Vayots Dzor
Vayots Dzor is a province of Armenia. It lies in the south-east of the country, bordering the Nakhichevan exclave of Azerbaijan in the west and the Azerbaijan in the east. It covers an area of 2,308 km². With a population of only 53,230 , it is the most sparsely populated province in the country...
and Syunik
Syunik
Syunik is the southernmost province of Armenia. It borders the Vayots Dzor marz to the north, Azerbaijan's Nakhchivan exclave to the west, Karabakh to the east, and Iran to the south. Its capital is Kapan. Other important cities and towns include Goris, Sisian, Meghri, Agarak, and Dastakert...
, and parts of the present-day Nagorno-Karabakh Republic
Nagorno-Karabakh Republic
The Nagorno-Karabakh Republic , or Artsakh Republic is a de facto independent republic located in the South Caucasus region of Eurasia...
.

On 20 September 1920, the Turkish General Kazım Karabekir
Kazim Karabekir
Musa Kâzım Karabekir was a Turkish general and politician. He was commander of the Eastern Army in the Ottoman Empire at the end of World War I and served as Speaker of the Grand National Assembly of Turkey before his death.-Early years:Karabekir was born in 1882 as the son of an Ottoman General,...
invaded the borders of the Democratic Republic of Armenia
Democratic Republic of Armenia
The Democratic Republic of Armenia was the first modern establishment of an Armenian state...
, which was delineated by the United States. In response, the DRA declared war on Turkey on September 24 and the Turkish-Armenian War
Turkish-Armenian War
The Turkish–Armenian War stemmed from an invasion of the Democratic Republic of Armenia by the Turkish Revolutionaries of the Turkish National Movement in the autumn of 1920...
began. In the regions of Oltu
Oltu
Oltu is a town and district of Erzurum Province in the Eastern Anatolia region of Turkey. The mayor is İbrahim Ziyrek . The population is 19,969 .-History:...
, Sarikamis
Sarikamis
Sarıkamış is a town and a district of Kars Province in the Eastern Anatolia region of Turkey. The population is 17,860 as of 2010.The town sits in a valley and is surrounded by mountains, many of which are covered with pine forests. It has very long winters, with average of 7–8 ft of...
, Kars
Kars
Kars is a city in northeast Turkey and the capital of Kars Province. The population of the city is 73,826 as of 2010.-Etymology:As Chorzene, the town appears in Roman historiography as part of ancient Armenia...
, Alexandropol (Gyumri
Gyumri
Gyumri is the capital and largest city of the Shirak Province in northwest Armenia. It is located about 120 km from the capital Yerevan, and, with a population of 168,918 , is the second-largest city in Armenia.The name of the city has been changed many times in history...
) Armenian forces clashed with those of Turkish Karabekir. Mustafa Kemal Atatürk
Mustafa Kemal Atatürk
Mustafa Kemal Atatürk was an Ottoman and Turkish army officer, revolutionary statesman, writer, and the first President of Turkey. He is credited with being the founder of the Republic of Turkey....
then sent several delegations to Moscow in search of an alliance. This proved disastrous for the Armenians. 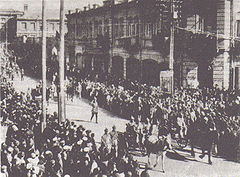 The Soviet 11th Red Army's invasion of the Democratic Republic of Armenia started on the 29th of November 1920. The actual transfer of power took place on December 2 in Yerevan, when the Armenian leadership approved an ultimatum presented to it by the Soviet plenipotentiary Boris Legran
Boris Legran
Boris Vasilyevich Legran or Legrand was a Bolshevik revolutionary and Soviet official who represented the interests of the Russian SFSR in Armenia and Transcaucasia, during the 1920s and worked as a consular official in China during the 1920s.He also was the director of the State Hermitage Museum...
. Armenia agreed to join the Soviet sphere, while Soviet Russia agreed to protect its remaining territory from the advancing Turkish army. The Soviets also pledged to take steps to rebuild the army, to protect the Armenians and not to persecute non-communists, although the final condition of this pledge was reneged when the Dashnaks were forced out of the country. The Soviet Government proposed the annexation of the Nagorno-Karabagh and Syunik
Syunik
Syunik is the southernmost province of Armenia. It borders the Vayots Dzor marz to the north, Azerbaijan's Nakhchivan exclave to the west, Karabakh to the east, and Iran to the south. Its capital is Kapan. Other important cities and towns include Goris, Sisian, Meghri, Agarak, and Dastakert...
regions of Armenia to Soviet Azerbaijan. This step was strongly rejected by Garegin Nzhdeh, who declared Syunik as a self-governing region in December 1920. On January 1921 Drastamat Kanayan
Drastamat Kanayan
General Drastamat Kanayan , known as General Dro, Դրօ, May 31, 1884 March 8, 1956), was a politician, revolutionary, military commander of Hitler’s Armenian Legion of the Wehrmacht, the armed forces of Nazi Germany, and part of Armenian national liberation movement as a member of the A.R.F...
sent a telegram to Njdeh, suggesting allowing the sovietisation of Syunik, through which they could gain the support of the Bolshevik government in solving the problems of the Armenian lands. Njdeh again proved himself as ﻿a long-sighted politician, he did not depart from Syunik and continued his struggle against the Red Army and Soviet Azerbaijan.

On 18 February 1921, the Dashnaks led an anti-Soviet rebellion in Yerevan and seized power. The ARF controlled Yerevan and the surrounding regions for almost 42 days before being defeated by the numerically superior Red Army troops later in April 1921. The leaders of the rebellion then retreated into the Syunik region.

On 26 April 1921, the 2nd Pan-Zangezurian congress, held in Tatev
Tatev
The Monastery of Tatev is a 9th century Armenian monastery located in the Tatev village in Syunik Province in southern Armenia. The term "Tatev" usually refers to the monastery. It stands on a plateau on the edge of the deep gorge of the Orotan River...
, announced the independence of the self-governing regions of Daralakyaz (Vayots Dzor), Zangezur, and Mountainous Artsakh, under the name of the Republic of Mountainous Armenia (Lernahaystani Hanrapetutyun).

The city of Goris became the capital of the unrecognized state, and Garegin Nzhdeh was chosen as prime minister and minister of defence. Later, in July, Simon Vratsian
Simon Vratsian
Simon Vratsian was an Armenian political figure and the last Prime Minister of the Democratic Republic of Armenia.After education at Armenian and Russian schools he joined the Dashnak party. He received further education at the Gevorgian seminary from 1900 to 1906...
took the office as prime minister while Njdeh became the governor and the general commander.

Between April and July 1921, the Red Army conducted massive military operations in the region, attacking Syunik from north and the east. After months of fierce battles with the Red Army, the Republic of Mountainous Armenia capitulated in July 1921 following Soviet Russia's promises to keep the mountainous region as a part of Soviet Armenia. After losing the battle, Garegin Nzhdeh, his soldiers, and many prominent Armenian intellectuals, including leaders of the first Independent Republic of Armenia
Democratic Republic of Armenia
The Democratic Republic of Armenia was the first modern establishment of an Armenian state...
, crossed the border into neighboring Persian city of Tabriz
Tabriz
Tabriz is the fourth largest city and one of the historical capitals of Iran and the capital of East Azerbaijan Province. Situated at an altitude of 1,350 meters at the junction of the Quri River and Aji River, it was the second largest city in Iran until the late 1960s, one of its former...
.

The formation of the short-lived republic saved the Armenian population of Syunik from being massacred by the Tatars of Azerbaijan. The heroism and rational diplomacy of Garegin Nzhdeh ensured that the southern Armenian region of Syunik remained in Soviet Armenian hands.
The source of this article is wikipedia, the free encyclopedia.  The text of this article is licensed under the GFDL.