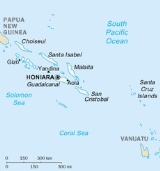 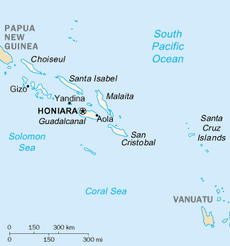 Deep seated problems of land alienation
Alienated land
Alienated land is that which has been acquired from customary landowners by Government, either for its own use or private development requiring a mortgage or other forms of guarantees. The term refers historically to the appropriation of customary land by European colonial powers. Land was...
dating from colonialism
Colonialism
Colonialism is the establishment, maintenance, acquisition and expansion of colonies in one territory by people from another territory. It is a process whereby the metropole claims sovereignty over the colony and the social structure, government, and economics of the colony are changed by...
, unresolved after independence
Independence
Independence is a condition of a nation, country, or state in which its residents and population, or some portion thereof, exercise self-government, and usually sovereignty, over its territory....
have led to a number of compensation
Damages
In law, damages is an award, typically of money, to be paid to a person as compensation for loss or injury; grammatically, it is a singular noun, not plural.- Compensatory damages :...
claims on land use.

According to "Peacemaking in Solomon Islands: The experience of the Guadalcanal Women for Peace movement" by Dalcy Tovosia Paina, School of Education, Solomon Islands College of Higher Education,

"The Honiara Peace Accord that was signed by the warring parties (Guadalcanal and Malaita), the government and the Commonwealth Special Envoy (Major Sitiveni Rabuka) recognised several root causes of the conflict:

Nick Warner
Nick Warner
Nicholas Peter "Nick" Warner AO PSM is an Australian diplomat and public servant, who is the current Director-General of the Australian Secret Intelligence Service . From December 2006 to August 2009, he was the Secretary of the Australian Department of Defence...
assumed the role of Special Coordinator as leader of RAMSI, working with the Solomon Islands
Solomon Islands
Solomon Islands is a sovereign state in Oceania, east of Papua New Guinea, consisting of nearly one thousand islands. It covers a land mass of . The capital, Honiara, is located on the island of Guadalcanal...
Government and assisted by a New Zealand Deputy Special Coordinator, Peter Noble, and Fijian Assistant Special Coordinator, Sekove Naqiolevu. Major contributing nations to RAMSI include Australia, which directed the operation through running Combined Task Force
Task force
A task force is a unit or formation established to work on a single defined task or activity. Originally introduced by the United States Navy, the term has now caught on for general usage and is a standard part of NATO terminology...
635 (CTF 635), Fiji
Fiji
Fiji , officially the Republic of Fiji , is an island nation in Melanesia in the South Pacific Ocean about northeast of New Zealand's North Island...
, New Zealand, Papua New Guinea
Papua New Guinea
Papua New Guinea , officially the Independent State of Papua New Guinea, is a country in Oceania, occupying the eastern half of the island of New Guinea and numerous offshore islands...
and Tonga
Tonga
Tonga, officially the Kingdom of Tonga , is a state and an archipelago in the South Pacific Ocean, comprising 176 islands scattered over of ocean in the South Pacific...
. Initially, the commander of the Task Force – the military element of the Mission – was Lieutenant Colonel John Frewen, OC 2 RAR, and the deputy commander Major Vern Bennett, New Zealand Army, from Linton.
The Land Component included HQ 2nd Battalion, Royal Australian Regiment
2nd Battalion, Royal Australian Regiment
2nd Battalion, Royal Australian Regiment is a regular light infantry battalion of the Australian Army. 2 RAR was first formed as the Australian 66th Battalion in 1945 and since then it has seen active service during the Korean War, Malayan Emergency and Vietnam War...
from Townsville, 200 Australian infantry from 2 RAR, a Fijian rifle company, probably from 3 Fiji Infantry Regiment, Queen Elizabeth Bks, Suva, and a Pacific Islands Company, under an Australian Company commander, with Tongan, PNG, and Australian rifle platoons. Supporting elements included a PNG engineer troop, New Zealand engineer & medical elements, an Australian Combat Service Support Team, with some personnel from Army level troops from Sydney plus logistics personnel from New Zealand, and four Australian Project Nervana Unmanned Aerial Vehicle
Unmanned aerial vehicle
An unmanned aerial vehicle , also known as a unmanned aircraft system , remotely piloted aircraft or unmanned aircraft, is a machine which functions either by the remote control of a navigator or pilot or autonomously, that is, as a self-directing entity...
s for surveillance.

Military personnel provide security, material and logistical assistance to police forces assisting the Solomon Islands
Solomon Islands
Solomon Islands is a sovereign state in Oceania, east of Papua New Guinea, consisting of nearly one thousand islands. It covers a land mass of . The capital, Honiara, is located on the island of Guadalcanal...
Government in the restoration of law and order. From November 2003, the military component was reduced, as stability gradually returned to the country, and a sizeable civilian contingent, composed of economists, development assistance specialists and budget advisors commenced the reconstruction of the government, economy and finances of the Solomon Islands. The civilian contingent is now made up of around 130 personnel from many pacific countries, the most sizeable being Australia and New Zealand. Early successes included the stabilisation of government finances and normalisation of debt, as well as a number of economic reforms. Civilians in RAMSI are now focussing on capacity building of Solomon Islanders to take over the roles. Difficulties include the lack of available skilled Solomon Islanders.

Former Solomon Islands Prime Minister Manasseh Sogavare
Manasseh Sogavare
Manasseh Damukana Sogavare was the sixth Prime Minister of the Solomon Islands from 2000 to 2001 and again from 2006 to 2007. He has served in the National Parliament as Member for East Choiseul since 1997, and he is currently the Leader of the Opposition.-Biography:Sogavare was Permanent...
was outspoken in his criticism of RAMSI, which he accused of being dominated by Australia and of undermining the Solomons' sovereignty
Sovereignty
Sovereignty is the quality of having supreme, independent authority over a geographic area, such as a territory. It can be found in a power to rule and make law that rests on a political fact for which no purely legal explanation can be provided...
. By contrast, his successor Prime Minister Derek Sikua
Derek Sikua
David Derek Sikua served as the ninth Prime Minister of Solomon Islands from December 20, 2007 to August 25, 2010. He is a member of the Solomon Islands Liberal Party.-Career:Sikua is from Ngalitavethi Village in Guadalcanal Province...
has stated he supports RAMSI, and has criticised his predecessor, saying in January 2008: "I think for some time in the last 18 months, the Solomon Islands government was preoccupied with finding fault in RAMSI." Sikua has stated:

"[We will] provide leadership that will work closely with RAMSI to achieve clearly stated and agreed objectives for the long-term benefit of Solomon Islands. [...] RAMSI is here on our invitation. [...] [The mission] is important to Solomon Islands as it provides security, development of our police service, and the strengthening of the capacity of government institutions."

Sikua has also asked RAMSI to assist the Solomons' rural areas "in the health sector and in the education sector as well as in infrastructure and other sectors to do with income generation and economic activities".

In early January 2005, a joint operation between the Royal Solomon Islands Police (RSIP) and Participating Police Force (PPF) resulted in the arrest of James Tatau. Tatau was charged with Dunning's murder, the attempted murder of his colleague, and an earlier shooting incident on a Participating Police Force (PPF) vehicle, in which a bullet narrowly missed two PPF officers.

After the arrest, the military presence within RAMSI was again reduced. As of 2005, the five troop-contributing nations (Australia, New Zealand, Papua New Guinea, Fiji and Tonga) together provided approximately 40 personnel to support the PPF. There are currently around 200 troops stationed in Solomon Islands, who regularly conduct patrols in the capital, Honiara and throughout the provinces.

Solomon Islanders James Tatau and John Hen Ome were acquitted after standing trial for the killing of Adam Dunning in May 2007.

On 18 April 2006 Snyder Rini
Snyder Rini
Snyder Rini is a Solomon Islands politician who was briefly the eighth Prime Minister of the Solomon Islands from April to May 2006 and has been Minister for Finance and Treasury since December 2007...
was elected Prime Minister of the Solomon Islands in a general election. This sparked rioting in Honiara
Honiara
Honiara, population 49,107 , 78,190 , is the capital of the Solomon Islands and of Guadalcanal Province, although it is a separately administered town...
amidst allegations that the election was fixed with the aid of money from Chinese businessmen. Parts of Honiara were razed and looted, with Chinese-owned property particularly targeted. With up to 90% of their shops burnt down in Chinatown, most Chinese have evacuated the country in fear of their personal safety. Snyder Rini resigned on the floor of Parliament on 26 April after just eight days as Prime Minister and as MPs were due to vote on a motion of no confidence against him.

In response, from 20 April 2006, RAMSI forces were rapidly bolstered by a further 220 Australian troops. New Zealand sent a further rifle company and 30 police to increase its RAMSI contribution to around 160 troops and 67 police.

The PPF currently comprises police officers from 15 Pacific nations: Australia, New Zealand, Papua New Guinea, Fiji, Republic of Marshall Islands, Palau, Federated States of Micronesia, Niue, Tonga, Samoa
Samoa
Samoa , officially the Independent State of Samoa, formerly known as Western Samoa is a country encompassing the western part of the Samoan Islands in the South Pacific Ocean. It became independent from New Zealand in 1962. The two main islands of Samoa are Upolu and one of the biggest islands in...
, Cook Islands
Cook Islands
The Cook Islands is a self-governing parliamentary democracy in the South Pacific Ocean in free association with New Zealand...
, Vanuatu
Vanuatu
Vanuatu , officially the Republic of Vanuatu , is an island nation located in the South Pacific Ocean. The archipelago, which is of volcanic origin, is some east of northern Australia, northeast of New Caledonia, west of Fiji, and southeast of the Solomon Islands, near New Guinea.Vanuatu was...
, Nauru
Nauru
Nauru , officially the Republic of Nauru and formerly known as Pleasant Island, is an island country in Micronesia in the South Pacific. Its nearest neighbour is Banaba Island in Kiribati, to the east. Nauru is the world's smallest republic, covering just...
, Kiribati
Kiribati
Kiribati , officially the Republic of Kiribati, is an island nation located in the central tropical Pacific Ocean. The permanent population exceeds just over 100,000 , and is composed of 32 atolls and one raised coral island, dispersed over 3.5 million square kilometres, straddling the...
and Tuvalu
Tuvalu
Tuvalu , formerly known as the Ellice Islands, is a Polynesian island nation located in the Pacific Ocean, midway between Hawaii and Australia. Its nearest neighbours are Kiribati, Nauru, Samoa and Fiji. It comprises four reef islands and five true atolls...
.