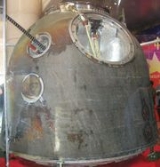 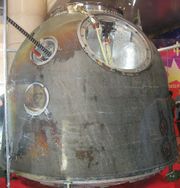 A reentry capsule is the portion of a spacecraft
Spacecraft
A spacecraft or spaceship is a craft or machine designed for spaceflight. Spacecraft are used for a variety of purposes, including communications, earth observation, meteorology, navigation, planetary exploration and transportation of humans and cargo....
which returns to Earth following a space flight. The shape is determined partly by aerodynamics
Aerodynamics
Aerodynamics is a branch of dynamics concerned with studying the motion of air, particularly when it interacts with a moving object. Aerodynamics is a subfield of fluid dynamics and gas dynamics, with much theory shared between them. Aerodynamics is often used synonymously with gas dynamics, with...
; a capsule is aerodynamically stable falling blunt end first, which allows only the blunt end to require a heat shield
Heat shield
A heat shield is designed to shield a substance from absorbing excessive heat from an outside source by either dissipating, reflecting or simply absorbing the heat...
for atmospheric reentry
Atmospheric reentry
Atmospheric entry is the movement of human-made or natural objects as they enter the atmosphere of a celestial body from outer space—in the case of Earth from an altitude above the Kármán Line,...
. Its shape has also been compared to that of an old-fashioned automobile's headlight. A manned capsule contains the spacecraft's instrument panel, limited storage space, and seats for crew members. Because a capsule shape has little aerodynamic lift, the final descent is via parachute
Parachute
A parachute is a device used to slow the motion of an object through an atmosphere by creating drag, or in the case of ram-air parachutes, aerodynamic lift. Parachutes are usually made out of light, strong cloth, originally silk, now most commonly nylon...
, either coming to rest on land, at sea, or by active capture by another aircraft. In contrast, the development of spaceplane
Spaceplane
A spaceplane is a vehicle that operates as an aircraft in Earth's atmosphere, as well as a spacecraft when it is in space. It combines features of an aircraft and a spacecraft, which can be thought of as an aircraft that can endure and maneuver in the vacuum of space or likewise a spacecraft that...
reentry vehicles attempts to provide a more flexible reentry profile.

The reentry capsule is the "middle" module of the three-part Soyuz or Shenzhou spacecraft – the orbital module is located at the front of the spacecraft, with the service
Service module
A service module is a spacecraft compartment containing a variety of support systems used for spacecraft operations. Usually located in the uninhabited area of the spacecraft, the service module is jettisoned upon the completion of the mission, and usually burns up during atmospheric reentry...
or equipment module attached to the rear. A feature in the landing system allows the use of a single parachute and "braking rocket," thus the heatshield is dropped from the spacecraft similar to the landing bag deployment on the U.S. Mercury
Project Mercury
In January 1960 NASA awarded Western Electric Company a contract for the Mercury tracking network. The value of the contract was over $33 million. Also in January, McDonnell delivered the first production-type Mercury spacecraft, less than a year after award of the formal contract. On February 12,...
spacecraft. Like the Command Module
Apollo Command/Service Module
The Command/Service Module was one of two spacecraft, along with the Lunar Module, used for the United States Apollo program which landed astronauts on the Moon. It was built for NASA by North American Aviation...
of the Apollo spacecraft
Apollo spacecraft
The Apollo spacecraft was composed of five combined parts designed to accomplish the American Apollo program's goal of landing astronauts on the Moon by the end of the 1960s and returning them safely to Earth...
, the Shenzhou reentry capsule has no reusable capabilities; each spacecraft is flown once and then "thrown away" (usually sent to museums).

Few details are known about the Shenzhou reentry capsule, except that it uses some technology from the Soyuz TM design. The new Soyuz TMA spacecraft, now used solely for International Space Station
International Space Station
The International Space Station is a habitable, artificial satellite in low Earth orbit. The ISS follows the Salyut, Almaz, Cosmos, Skylab, and Mir space stations, as the 11th space station launched, not including the Genesis I and II prototypes...
flights, had its couches modified to allow for taller crewmembers to fly, and features "glass cockpit" technology similar to that found on the Space Shuttle
Space Shuttle
The Space Shuttle was a manned orbital rocket and spacecraft system operated by NASA on 135 missions from 1981 to 2011. The system combined rocket launch, orbital spacecraft, and re-entry spaceplane with modular add-ons...
and newer commercial and military aircraft.

Although no Chinese casualties have occurred on the few flights of the Shenzhou reentry capsule, the former Soviet Union suffered two disasters, and one near-disaster, all three involving the capsule during the de-orbit and reentry. Soyuz 1
Soyuz 1
Soyuz 1 was a manned spaceflight of the Soviet space program. Launched into orbit on April 23, 1967 carrying cosmonaut Colonel Vladimir Komarov, Soyuz 1 was the first flight of the Soyuz spacecraft...
ended in disaster when the parachutes failed to deploy and the capsule smashed into the earth at speeds over 300 mph, killing cosmonaut Vladimir Komarov. Soyuz 5
Soyuz 5
Soyuz 5 was a Soyuz mission using the Soyuz 7K-OK spacecraft launched by the Soviet Union on January 15, 1969, which docked with Soyuz 4 in orbit...
almost ended in disaster, when the reentry capsule entered the atmosphere on the wrong end – attributed to a failure of the equipment module to separate similar to that on the Vostok 1
Vostok 1
Vostok 1 was the first spaceflight in the Vostok program and the first human spaceflight in history. The Vostok 3KA spacecraft was launched on April 12, 1961. The flight took Yuri Gagarin, a cosmonaut from the Soviet Union, into space. The flight marked the first time that a human entered outer...
flight. Luckily, the equipment module burned off the descent module and the capsule righted itself.

Soyuz 11
Soyuz 11
Soyuz 11 was the first manned mission to arrive at the world's first space station, Salyut 1. The mission arrived at the space station on June 7, 1971 and departed on June 30, 1971. The mission ended in disaster when the crew capsule depressurized during preparations for re-entry, killing the...
ended in disaster in 1971 when an equalization valve, used to equalize air pressure during the Soyuz final descent, prematurely opened in the vacuum of space, killing the three crew members, who were not wearing spacesuits. Subsequent flights, from Soyuz 12
Soyuz 12
Soyuz 12 was a 1973 manned test flight by the Soviet Union of the newly-redesigned Soyuz 7K-T spacecraft that was intended to provide greater crew safety in the wake of the Soyuz 11 tragedy. The flight marked the return of the Soviets to manned space operations after the 1971 accident...
to Soyuz 40
Soyuz 40
-Backup crew:-Mission parameters:*Mass: 6800 kg*Perigee: 198.1 km*Apogee: 287 km*Inclination: 51.6°*Period: 89.06 minutes-Mission highlights:...
, utilized a two-man crew because the third seat had to be removed for the pressure suit controls. The Soyuz T version restored the third seat.