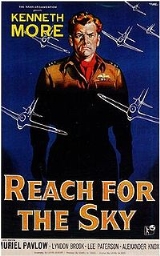 Encyclopedia
Reach for the Sky is a 1956 British biographical film
Biographical film
A biographical film, or biopic , is a film that dramatizes the life of an actual person or people. They differ from films “based on a true story” or “historical films” in that they attempt to comprehensively tell a person’s life story or at least the most historically important years of their...
of aviator Douglas Bader
Douglas Bader
Group Captain Sir Douglas Robert Steuart Bader CBE, DSO & Bar, DFC & Bar, FRAeS, DL was a Royal Air Force fighter ace during the Second World War. He was credited with 20 aerial victories, four shared victories, six probables, one shared probable and 11 enemy aircraft damaged.Bader joined the...
, based on the 1954 biography of the same name by Paul Brickhill
Paul Brickhill
Paul Chester Jerome Brickhill was an Australian writer, whose World War II books were turned into popular movies.-Biography:...
. The film stars Kenneth More
Kenneth More
Kenneth Gilbert More CBE was a highly successful English film actor during the post-World War II era and starred in many feature films, often in the role of an archetypal carefree and happy-go-lucky middle-class gentleman.-Early life:Kenneth More was born in Gerrards Cross, Buckinghamshire, the...
and was directed by Lewis Gilbert
Lewis Gilbert
Lewis Gilbert CBE is an English film director, producer and screenwriter.-Early life:He was the son of music hall performers, and spent his early years travelling with his parents, and watching the shows from the side of the stage. He first performed on-stage at the age of 5, when asked to drive a...
. It won the BAFTA Award for Best British Film of 1956.

In 1928, Douglas Bader
Douglas Bader
Group Captain Sir Douglas Robert Steuart Bader CBE, DSO & Bar, DFC & Bar, FRAeS, DL was a Royal Air Force fighter ace during the Second World War. He was credited with 20 aerial victories, four shared victories, six probables, one shared probable and 11 enemy aircraft damaged.Bader joined the...
, a hyperactive young man, joins RAF
Royal Air Force
The Royal Air Force is the aerial warfare service branch of the British Armed Forces. Formed on 1 April 1918, it is the oldest independent air force in the world...
Cranwell
Cranwell
Cranwell is a village situated in the North Kesteven district of Lincolnshire. It is part of the Civil Parish of Cranwell and Byard's Leap and is located 3.95 miles north-north-west of Sleaford and 16.3 miles south-east of the county town of Lincoln...
as a cadet. Despite a schoolboy-like disregard for service discipline and flight rules, he successfully completes his training and is posted to No. 23 squadron at Kenley
Kenley
Kenley is a district in the south of the London Borough of Croydon. It borders Purley, Coulsdon, Riddlesdown, Caterham and Whyteleafe. Kenley is situated 13 miles south of Charing Cross. The 2001 census showed Kenley having a population of 13,525....
. In 1931, he crashes his aircraft and despite nearly dying, survives, although both legs are amputated. During convalescence, he meets and starts to court Thelma Edwards. Refused flying duties and offered a desk job, he leaves the RAF and takes an office job with Shell Oil. On the strength of this, he and Thelma marry.

As the Second World War starts, Bader talks himself back into the Royal Air Force. He takes part in the Battle of Britain
Battle of Britain
The Battle of Britain is the name given to the World War II air campaign waged by the German Air Force against the United Kingdom during the summer and autumn of 1940...
, and is posted to take command of a squadron comprising mostly Canadians, vastly improving morale and discipline.

In 1941, Bader is shot down and taken prisoner, after being forced to bail out over France. He escapes and is moved to several POW camps, ending in Colditz Castle
Colditz Castle
Colditz Castle is a Renaissance castle in the town of Colditz near Leipzig, Dresden, and Chemnitz in the state of Saxony in Germany. Used as a workhouse for the indigent and a mental institution for over 100 years, it gained international fame as a prisoner-of-war camp during World War II for...
.

Despite his disability, Bader makes many attempts at escape, and the Germans threaten to take his prosthetic legs away. The story continues to his release in 1945, when Bader is again able to lead his pilots in a flypast
Flypast
Flypast is a term used in the United Kingdom, the Commonwealth, and other countries to denote ceremonial or honorific flights by groups of aircraft and, rarely, by a single aircraft...
commemorating the war's end.

The following aircraft were used in the filming of Reach to the Sky.

In order to realistically depict the various Royal Air Force
Royal Air Force
The Royal Air Force is the aerial warfare service branch of the British Armed Forces. Formed on 1 April 1918, it is the oldest independent air force in the world...
bases, principal filming took place in Surrey at RAF Kenley
RAF Kenley
The former Royal Air Force Station Kenley, more commonly known as RAF Kenley was a station of the Royal Flying Corps in World War I and the RAF in World War II. It is located near Kenley, London, England.-History:...
, and around the village of Bagshot. Studio work was completed at the Pinewood Studios, Iver Heath, Buckinghamshire, England, UK. Available wartime combat aircraft including Hawker Hurricane
Hawker Hurricane
The Hawker Hurricane is a British single-seat fighter aircraft that was designed and predominantly built by Hawker Aircraft Ltd for the Royal Air Force...
and Supermarine Spitfire
Supermarine Spitfire
The Supermarine Spitfire is a British single-seat fighter aircraft that was used by the Royal Air Force and many other Allied countries throughout the Second World War. The Spitfire continued to be used as a front line fighter and in secondary roles into the 1950s...
fighters were arranged to take on the aerial scenes.

The film fared well with the public, being the most popular film in the UK for 1956. When the film was released in North America, the American release version was slightly altered with 12 minutes edited out.
The source of this article is wikipedia, the free encyclopedia.  The text of this article is licensed under the GFDL.