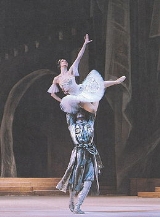 Encyclopedia
Raymonda is a ballet
Ballet
Ballet is a type of performance dance, that originated in the Italian Renaissance courts of the 15th century, and which was further developed in France and Russia as a concert dance form. The early portions preceded the invention of the proscenium stage and were presented in large chambers with...
in three acts, four scenes with an apotheosis
Apotheosis
Apotheosis is the glorification of a subject to divine level. The term has meanings in theology, where it refers to a belief, and in art, where it refers to a genre.In theology, the term apotheosis refers to the idea that an individual has been raised to godlike stature...
, choreographed by Marius Petipa
Marius Petipa
Victor Marius Alphonse Petipa was a French ballet dancer, teacher and choreographer. Petipa is considered to be the most influential ballet master and choreographer of ballet that has ever lived....
, with music by Alexander Glazunov
Alexander Glazunov
Alexander Konstantinovich Glazunov was a Russian composer of the late Russian Romantic period, music teacher and conductor...
, his opus
Opus number
An Opus number , pl. opera and opuses, abbreviated, sing. Op. and pl. Opp. refers to a number generally assigned by composers to an individual composition or set of compositions on publication, to help identify their works...
57. First presented by the Imperial Ballet
Mariinsky Ballet
The Mariinsky Ballet is a classical ballet company based at the Mariinsky Theatre in Saint Petersburg, Russia. Founded in the 18th century and originally known as the Imperial Russian Ballet, the Mariinsky Ballet is one of the world's leading ballet companies...
at the Imperial Mariinsky Theatre on in St. Petersburg, Russia. Among the ballet's most celebrated passages is the Pas Classique hongrois or Raymonda Pas de dix from the third act, which is often performed independently.

Raymonda was the creation of Marius Petipa
Marius Petipa
Victor Marius Alphonse Petipa was a French ballet dancer, teacher and choreographer. Petipa is considered to be the most influential ballet master and choreographer of ballet that has ever lived....
, the renowned Maître de Ballet to the St. Petersburg Imperial Theatres, the composer Alexander Glazunov
Alexander Glazunov
Alexander Konstantinovich Glazunov was a Russian composer of the late Russian Romantic period, music teacher and conductor...
, the director of the St. Petersburg Imperial Theatres Ivan Vsevolozhsky
Ivan Vsevolozhsky
Ivan Alexandrovich Vsevolozhsky was the Director of the Imperial Theatres in Russia from 1881 to 1898.A competent administrator, Vsevolozhsky ran the Imperial Theatres with a determination for excellence...
, and the author and columnist Countess Lidiya Pashkova. 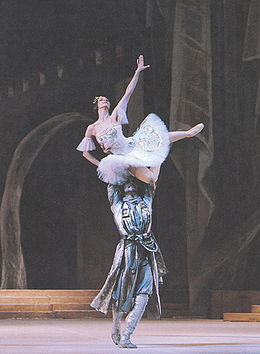 
The full-length Raymonda has been revived many times throughout its performance history, the most noted productions being staged by Mikhail Fokine for the Ballet Russe (1909); Anna Pavlova for her touring company (1914); George Balanchine
George Balanchine
George Balanchine , born Giorgi Balanchivadze in Saint Petersburg, Russia, to a Georgian father and a Russian mother, was one of the 20th century's most famous choreographers, a developer of ballet in the United States, co-founder and balletmaster of New York City Ballet...
and Alexandra Danilova
Alexandra Danilova
Aleksandra Dionisyevna Danilova was a Russian-born prima ballerina who became an American citizen....
for the Ballet Russe de Monte Carlo
Ballet Russe de Monte Carlo
Ballet Russe de Monte Carlo was a ballet company created by members of the Ballets Russes de Monte-Carlo in 1938 after Léonide Massine and René Blum had a falling-out with the co-founder Wassily de Basil...
(1946); Konstantin Sergeyev for the Kirov Ballet (1948); Rudolf Nureyev
Rudolf Nureyev
Rudolf Khametovich Nureyev was a Russian dancer, considered one of the most celebrated ballet dancers of the 20th century. Nureyev's artistic skills explored expressive areas of the dance, providing a new role to the male ballet dancer who once served only as support to the women.In 1961 he...
for American Ballet Theatre
American Ballet Theatre
American Ballet Theatre , based in New York City, was one of the foremost ballet companies of the 20th century. It continues as a leading dance company in the world today...
(1975), and for the Paris Opera Ballet
Paris Opera Ballet
The Paris Opera Ballet is the oldest national ballet company in the world, and many European and international ballet companies can trace their origins to it...
(1983); Yuri Grigorovich for the Bolshoi Ballet
Bolshoi Ballet
The Bolshoi Ballet is an internationally renowned classical ballet company, based at the Bolshoi Theatre in Moscow, Russia. Founded in 1776, the Bolshoi is among the world's oldest ballet companies, however it only achieved worldwide acclaim by the early 20th century, when Moscow became the...
(1984); Anna-Marie Holmes (in a 2-act reduction) for the Finnish National Ballet
Finnish National Ballet
Finnish National Ballet is a professional ballet company at the Finnish National Opera, in Helsinki, Finland. The company was founded in 1922 and it currently employs 73 dancers. It is the only Finnish company that regularly performs a classical ballet repertoire...
(2004), a version which was then staged for American Ballet Theatre (2004) and the Dutch National Ballet
Dutch National Ballet
Dutch National Ballet was formed in 1961 when the Amsterdams Ballet and the Nederlands Ballet merged. The company has been directed by Sonia Gaskell , Rudi van Dantzig , Wayne Eagling and is currently directed by Ted Brandsen. It is the largest dance company in the Netherlands and attracts many...
(2005).

There have been many productions around the world of only extracts from the full-length Raymonda, being for the most part taken from the Grand Pas Classique Hongrois from the third Act, which is considered to be among Marius Petipa's supreme masterworks. The most noted of these productions have been staged by George Balanchine for the New York City Ballet
New York City Ballet
New York City Ballet is a ballet company founded in 1948 by choreographer George Balanchine and Lincoln Kirstein. Leon Barzin was the company's first music director. Balanchine and Jerome Robbins are considered the founding choreographers of the company...
(1955, 1961, 1973); Rudolf Nureyev for the Royal Ballet Touring Company (1964); and Mikhail Baryshnikov
Mikhail Baryshnikov
Mikhail Nikolaevich Baryshnikov is a Soviet and American dancer, choreographer, and actor, often cited alongside Vaslav Nijinsky and Rudolf Nureyev as one of the greatest ballet dancers of the 20th century. After a promising start in the Kirov Ballet in Leningrad, he defected to Canada in 1974...
for American Ballet Theatre (1980, 1987).