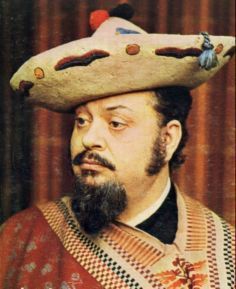 Raúl de Ramón was a Chile
Chile
Chile ,officially the Republic of Chile , is a country in South America occupying a long, narrow coastal strip between the Andes mountains to the east and the Pacific Ocean to the west. It borders Peru to the north, Bolivia to the northeast, Argentina to the east, and the Drake Passage in the far...
an composer
Composer
A composer is a person who creates music, either by musical notation or oral tradition, for interpretation and performance, or through direct manipulation of sonic material through electronic media...
, musician and folklorist and author of numerous songs of great diffusion in Chile like The Curanto, Nostalgia Colchaguina, Camino de Soledad, Rosa Colorada, Canción de la Caballería, El Amor del Arriero and a hundred more. He conformed next to his wife Maria Eugenia and his two children Carlos and Raúl the group Los de Ramón
Los de Ramon
Los de Ramón are a Chilean folkloric group of vast trajectory and extended musical diffusion not only in Chile , also in Latin America. Conformed by the family group of Raul de Ramon , his wife Maria Eugenia and his two children Carlos Alberto and Raul Eduardo were of great importance like...
with whom he traveled and presented Chilean music by all U.S.A. (more than 92 concerts), Mexico and the rest of the countries of Latin America.

He recorded next to his family more than thirteen longplays, two of them in Mexico, with own creations and with compilations of folkloric music of all Latin America. Also, he published some books of Chilean literature, including, El Caballero y sus Dragones a country Chilean novel; Raíces en la Bruma, a poetry book, and Arreo en el Viento, a compilation of important parts of his musical work.

De Ramón studied at The Grange School in Santiago
The Grange School, Santiago
The Grange School is a private co-ed school in La Reina, Santiago, Chile with an enrollment of about 1,800 and over 300 employees. It is known for a strong sports program in addition to high academic standards. It was founded June 4, 1928, by John A.S. Jackson —an anglo-Chilean born in Valparaíso...
and soon graduated as an architect from the Catholic University of Chile. He spent an important part of its youth in the country in the Colchagua Province
Colchagua Province
Colchagua Province is one of three provinces of the central Chilean region of O'Higgins . Its capital is San Fernando. It is bordered on the north by Cachapoal Province, on the east by the Argentine Republic, on the south by Curicó Province, and on the west by Cardenal Caro Province.-Geography and...
where he became absorbed by the fundamentals of the Chilean culture of the Central Zone
Zona Central, Chile
Zona central is one of the five natural regions into which CORFO divided continental Chile in 1950. It is home to a majority of the Chilean population and includes the three largest metropolitan areas- Santiago, Valparaíso, and Concepción...
, crossing it by horse and taking feeling of its roots, falling in love deeply with the basis of Chilean heritage which would be reflected widely in his later work.

The first group he set was conformed at the University and it was called the Huincas next to his friend of youth Rogelio Muñoz, and after next to his woman he set Los de Ramón
Los de Ramon
Los de Ramón are a Chilean folkloric group of vast trajectory and extended musical diffusion not only in Chile , also in Latin America. Conformed by the family group of Raul de Ramon , his wife Maria Eugenia and his two children Carlos Alberto and Raul Eduardo were of great importance like...
inside of which he will after integrate his two children. Not only he investigated and carried out a deep search in Chilean folklore but also he did it in the Latin American folklore where he carried out next to his woman Maria Eugenia an extense compilation of songs, rhythms and clothes of the different countries. 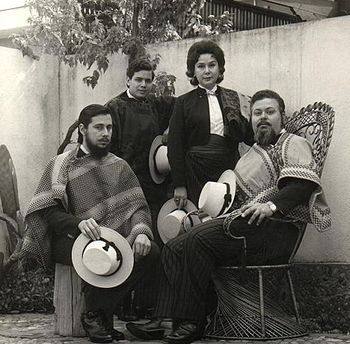 Very well known were the meetings that took place in their house with folklorists of all the countries of Latin America where the music of all of them was sung, it was called by many like the Small O.A.S. In their representations they sung songs of all the Latin American countries interpreted each one with the typical instruments of each country arriving to used more than sixty different instruments interpreted all by they themselves, also songs of the north, center and the south of Chile. Some of the discs published by them that could be mentioned are : Arreo en el Viento, Nostalgia Colchaguina, An image of Chile, Human Landscape of Chile, Latin American Folkloric Panorama (published in Mexico, 2 longplays), Los de Ramón in Family and Chilean Mass, among others. 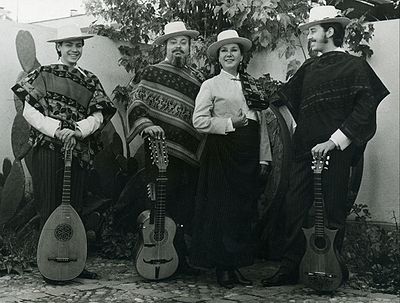 Raúl de Ramón also had influence and helped in the creation of new musical folkloric Chileans groups like Los Cantores de Santa Cruz, Los de Santiago and others. In his work could be mentioned also the construction of Chilean houses, the creation of a Chilean Mass even published in France, the creation of a still unpublished musical comedy and the creation of a restaurant, The Alero de los de Ramón, where Chilean music was played and typical Chilean food was eaten. His musical work includes the music of all the regions of Chile, north center and south. He was named "Illustrious Son of Santa Cruz" in regards of his collaboration to this city and has together with his family a place at the Museum of Colchagua at this city. He died in April in 1984 at 55 years of age.