The ADAC
ADAC
The ADAC is Germany's and Europe's largest automobile club, with more than 17 million members in June 2010. It was founded on May 24, 1903 as "Deutsche Motorradfahrer-Vereinigung" and was renamed in 1911...
Rallye Deutschland is a rally
Rallying
Rallying, also known as rally racing, is a form of auto racing that takes place on public or private roads with modified production or specially built road-legal cars...
event held in Germany. The event was first held in 1982 and originally hosted by e.g. Frankfurt
Frankfurt
Frankfurt am Main , commonly known simply as Frankfurt, is the largest city in the German state of Hesse and the fifth-largest city in Germany, with a 2010 population of 688,249. The urban area had an estimated population of 2,300,000 in 2010...
, Mainz
Mainz
Mainz under the Holy Roman Empire, and previously was a Roman fort city which commanded the west bank of the Rhine and formed part of the northernmost frontier of the Roman Empire...
and Koblenz
Koblenz
Koblenz is a German city situated on both banks of the Rhine at its confluence with the Moselle, where the Deutsches Eck and its monument are situated.As Koblenz was one of the military posts established by Drusus about 8 BC, the...
. In 2000, the rally was relocated to the region around Trier
Trier
Trier, historically called in English Treves is a city in Germany on the banks of the Moselle. It is the oldest city in Germany, founded in or before 16 BC....
. Previously part of the European and German championships, the event has been in the World Rally Championship
World Rally Championship
The World Rally Championship is a rallying series organised by the FIA, culminating with a champion driver and manufacturer. The driver's world championship and manufacturer's world championship are separate championships, but based on the same point system. The series currently consists of 13...
calendar since the 2002 season.

The rally traditionally started with the shakedown close to the servicepark on Thursday morning, before moving to Trier for the showstart. The next three days were separated according to the three different track characteristics. Friday's leg one was held to the northeast of Trier around the Moselle in the vineyards. For afternoon and evening service the cars returned to Bostalsee before heading to Trier and parc-ferme. Saturdays' stages where held on and around the military training grounds of Baumholder, including the famous special stage "Panzerplatte". The day ended with a spectator special stage in the small town of Sankt Wendel
Sankt Wendel
St. Wendel is a municipality in northeastern Saarland. It is situated on the river Blies 36 km northeast of Saarbrücken, the capital of Saarland, and is named after Saint Wendelin of Trier.- Geography :...
. Leg three was held in the northern Saarland around Sankt Wendel, followed by a second pass through the spectator special stage. In the early afternoon the crews returned to Trier for the Finish ceremony.

The existing layout received criticism from fans, teams and the FIA with many complaining about the long liaison between stages, and the town of Trier, especially its small businesses, looking for more involvement by moving Trier into the center of rally.

For the 2007 edition
2007 Rallye Deutschland
Results of Rallye Deutschland , 10th round of 2007 World Rally Championship, run on August 17 - 19:- Results :...
, the layout was modified accordingly. The service park along with the media center moved from Bostalsee to Trier's convention center grounds, which offer better infrastructure and are easier to reach. Fans can park in the streets nearby or make use of special shuttle services serving large parking grounds throughout Trier. Both parking and the service park itself are now mostly based on asphalt making them more weather-safe. The shakedown was relocated to the Luxembourg
Luxembourg
Luxembourg , officially the Grand Duchy of Luxembourg , is a landlocked country in western Europe, bordered by Belgium, France, and Germany. It has two principal regions: the Oesling in the North as part of the Ardennes massif, and the Gutland in the south...
ish border and the stages reorganized altogether, putting more focus on the vineyards close to Trier. As before, Friday consists of stages northeast of Trier. However, the second day now combines both the military grounds of Baumholder with a shortened version of Panzerplatte as well as some of the previous Saarland-stages. Sunday again moves the crews back to the vineyards, before the teams return to Trier for the newly created spectator special stage Circus Maximus. Advertised as the highlight of three days of Rally Germany, this stage is a 4.37 km run through downtown Trier around the Porta Nigra. Four cars enter the track separated by 10 to 20 seconds and drive four laps on the roads of Trier. Fans can watch the stage on specially erected grandstands or simply from the curbside. In 2008, the WRC run through stage was broadcast live on television.

Rally Deutschland is entirely held on asphalt
Asphalt
Asphalt or , also known as bitumen, is a sticky, black and highly viscous liquid or semi-solid that is present in most crude petroleums and in some natural deposits, it is a substance classed as a pitch...
. A significant part of its attraction originates in the mixture of track characteristics encountered throughout the three day period. This setup has earned it the description of "three rallies in one".

The vineyard
Vineyard
A vineyard is a plantation of grape-bearing vines, grown mainly for winemaking, but also raisins, table grapes and non-alcoholic grape juice...
stages consist of tight and twisted support roads, with short straights and hairpins in the steep mountains surrounding the Moselle
Moselle River
The Moselle is a river flowing through France, Luxembourg, and Germany. It is a left tributary of the Rhine, joining the Rhine at Koblenz. A small part of Belgium is also drained by the Mosel through the Our....
. Fans particularly like the stages because of the close proximity to the cars, sitting on small walls and in between the vines, often less than 2m from the ideal line. However, this layout has also raised serious concerns with the FIA regarding spectator safety. In 2008, the final stage of leg one was cancelled after too many fans where trying to make their way through the vineyards.

The roads on the military training ground near Baumholder
Baumholder
Baumholder is a town in the Birkenfeld district in Rhineland-Palatinate, Germany, in the Westrich, an historic region that encompasses areas in both Germany and France...
are made of rough concrete and surrounded by the dangerous "Hinkelstones", rocks up to a meter in size sidelining the roads as a restraint for military vehicles. The stages are fast and the vast military grounds offer endless spectator points, including the legendary crest known as "Gina". On this terrain small driving-errors almost automatically lead to serious damage to both car and driver, the most prominent victim being Petter Solberg
Petter Solberg
Petter "Hollywood" Solberg , from Spydeberg in Østfold, Norway, is a professional rally driver. He debuted in the World Rally Championship in 1998 and was signed by the Ford factory team in 1999...
in 2004. Finally, the asphalt roads in the rural northern Saarland
Saarland
Saarland is one of the sixteen states of Germany. The capital is Saarbrücken. It has an area of 2570 km² and 1,045,000 inhabitants. In both area and population, it is the smallest state in Germany other than the city-states...
are very fast with high-speed curves, only interrupted by some tight turns onto smaller roads.

Besides the different track characteristics, the frequently changing weather makes for additional excitement. Short but strong rainshowers can appear out of nowhere and significantly complicate the tyre-choice. In 2004, Marcus Grönholm
Marcus Grönholm
Marcus "Bosse" Grönholm is a Finnish former rally driver. Driving for Peugeot, he won the World Rally Championship in 2000 and 2002. After Peugeot withdrew from the World Rally Championship, Grönholm moved to Ford for the 2006 season and placed second in the drivers' world championship, losing the...
became the prominent victim of a rainy morning when he crashed out of the introductory stage on Friday. 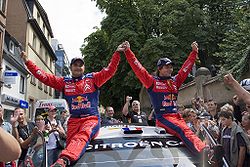