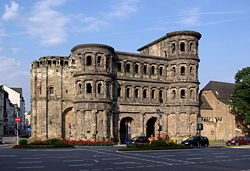 The Porta Nigra is a large Roman
Roman Empire
The Roman Empire was the post-Republican period of the ancient Roman civilization, characterised by an autocratic form of government and large territorial holdings in Europe and around the Mediterranean....
city gate
City Gates
-Track listing:# "Mingus Metamorphosis" 13:20# "Samba For Now" – 8:31# "Thank You Very Much Mr. Monk" – 7:57# "Nobody Knows the Trouble I've Seen" – 5:18# "City Gates" – 7:56...
in Trier
Trier
Trier, historically called in English Treves is a city in Germany on the banks of the Moselle. It is the oldest city in Germany, founded in or before 16 BC....
, Germany
Germany
Germany , officially the Federal Republic of Germany , is a federal parliamentary republic in Europe. The country consists of 16 states while the capital and largest city is Berlin. Germany covers an area of 357,021 km2 and has a largely temperate seasonal climate...
. It is today the largest Roman city gate north of the Alps
Alps
The Alps is one of the great mountain range systems of Europe, stretching from Austria and Slovenia in the east through Italy, Switzerland, Liechtenstein and Germany to France in the west....
and has been designated a World Heritage Site
World Heritage Site
A UNESCO World Heritage Site is a place that is listed by the UNESCO as of special cultural or physical significance...
.

The name Porta Nigra originated in the Middle Ages
Middle Ages
The Middle Ages is a periodization of European history from the 5th century to the 15th century. The Middle Ages follows the fall of the Western Roman Empire in 476 and precedes the Early Modern Era. It is the middle period of a three-period division of Western history: Classic, Medieval and Modern...
due to the darkened color of its stone; the original Roman name has not been preserved. Locals commonly refer to the Porta Nigra simply as Porta. 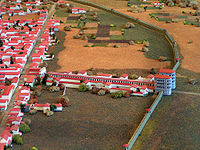 The Porta Nigra was built in grey sandstone
Sandstone
Sandstone is a sedimentary rock composed mainly of sand-sized minerals or rock grains.Most sandstone is composed of quartz and/or feldspar because these are the most common minerals in the Earth's crust. Like sand, sandstone may be any colour, but the most common colours are tan, brown, yellow,...
between 186 and 200 AD. The original gate consisted of two four-storied towers, projecting as near semicircles on the outer side. A narrow courtyard separated the two gate openings on either side. For unknown reasons, however, the construction of the gate remained unfinished. For example, the stones at the northern (outer) side of the gate were never abraded, and the protruding stones would have made it impossible to install movable gates. Nonetheless, the gate was used for several centuries until the end of the Roman era in Trier.

In Roman times, the Porta Nigra was part of a system of four city gates, one of which stood at each side of the roughly rectangular Roman city. The Porta Nigra guarded the northern entry to the Roman city, while the Porta Alba (White Gate) was built in the east, the Porta Media (Middle Gate) in the south, and the Porta Inclyta (Famous Gate) in the west, next to the Roman bridge across the Moselle River
Moselle River
The Moselle is a river flowing through France, Luxembourg, and Germany. It is a left tributary of the Rhine, joining the Rhine at Koblenz. A small part of Belgium is also drained by the Mosel through the Our....
. The gates stood at the ends of the two main streets of the Roman Trier, one of which led north-south and the other east-west. Of these gates, only the Porta Nigra still exists today.

In the early Middle Ages the Roman city gates were no longer used for their original function and their stones were taken and reused for other buildings. Also iron and lead braces were broken out of the walls of the Porta Nigra for reuse. Traces of this destruction are still clearly visible on the north side of the gate.

After 1028, the Greek monk Simeon lived as a hermit
Hermit
A hermit is a person who lives, to some degree, in seclusion from society.In Christianity, the term was originally applied to a Christian who lives the eremitic life out of a religious conviction, namely the Desert Theology of the Old Testament .In the...
in the ruins of the Porta Nigra. After his death (1035) and sanctification, the Simeonstift monastery was built next to the Porta Nigra to honor him. Saving it from further destruction, the Porta Nigra was transformed into a church: The inner court of the gate was roofed and intermediate ceilings were inserted. The two middle storeys of the former gate were converted into church nave
Nave
In Romanesque and Gothic Christian abbey, cathedral basilica and church architecture, the nave is the central approach to the high altar, the main body of the church. "Nave" was probably suggested by the keel shape of its vaulting...
s: the upper storey being for the monks and the lower storey for the general public. The ground floor with the large gates was sealed, and a large outside staircase was constructed alongside the south side (the town side) of the gate, up to the lower storey of the church. A small staircase led further up to the upper storey. The church rooms were accessible through former windows of the western tower of the Porta Nigra that were enlarged to become entrance doors (still visible today). The top floor of the western tower was used as church tower, the eastern tower was leveled, and an apse
Apse
In architecture, the apse is a semicircular recess covered with a hemispherical vault or semi-dome...
added at its east side. An additional gate - the much smaller Simeon Gate - was built adjacent to the East side of the Porta Nigra and served as a city gate in medieval times.

In 1802 Napoleon Bonaparte dissolved the church in the Porta Nigra and the monastery beside it, along with the vast majority of Trier's numerous churches and monasteries. On his visit to Trier in 1804, Napoleon ordered that the Porta Nigra be converted back to its Roman form. Only the apse was kept, and the eastern tower not rebuilt to its original height. Local legend has it that Napoleon originally even wanted to completely tear down the church. Allegedly, locals convinced him that the church had actually been a Gallic
Gaul
Gaul was a region of Western Europe during the Iron Age and Roman era, encompassing present day France, Luxembourg and Belgium, most of Switzerland, the western part of Northern Italy, as well as the parts of the Netherlands and Germany on the left bank of the Rhine. The Gauls were the speakers of...
festival hall before being turned into a church. Another version of the story is simply that they told him about its Roman origins. It is claimed that this prevented the destruction of the building and persuaded Napoleon instead to convert the gate back to its original form. 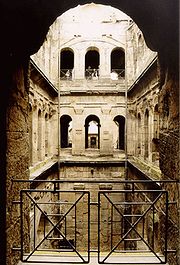 The modern appearance of the Porta Nigra goes back almost unchanged to the reconstruction ordered by Napoleon. At the south side of the Porta Nigra, remains of Roman columns line the last 100m of the street leading to the gate. Positioned where they had stood in Roman times, they give a slight impression of the aspect of the original Roman street that was lined with colonnades.

The gate is today closed for cars, but stands right next to one of the main streets of Trier. In addition to the general pollution, the exhaust fumes of the passing cars have been damaging the stones for decades. Generally, however, the Porta Nigra is still in remarkable condition.

The Porta Nigra, including the upper floors, is open to visitors. In summer, guided tours are also offered by an actor dressed up as and portraying a centurion
Centurion
A centurion was a professional officer of the Roman army .Centurion may also refer to:-Military:* Centurion tank, British battle tank* HMS Centurion, name of several ships and a shore base of the British Royal Navy...
(a Roman army officer) in full armour.