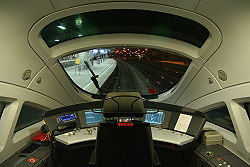 A railroad engineer, locomotive engineer, train operator, train driver or engine driver is a person who drives a train
Train
A train is a connected series of vehicles for rail transport that move along a track to transport cargo or passengers from one place to another place. The track usually consists of two rails, but might also be a monorail or maglev guideway.Propulsion for the train is provided by a separate...
on a railroad. The engineer is in charge of and responsible for the locomotive
Locomotive
A locomotive is a railway vehicle that provides the motive power for a train. The word originates from the Latin loco – "from a place", ablative of locus, "place" + Medieval Latin motivus, "causing motion", and is a shortened form of the term locomotive engine, first used in the early 19th...
(s) as well as the mechanical operation of the train, train speed, and all train handling.

On many US railroads, the career progression is one that starts as an assistant (brakeman
Brakeman
A brakeman is a rail transport worker whose original job it was to assist the braking of a train by applying brakes on individual wagons. The advent of through brakes on trains made this role redundant, although the name lives on in the United States where brakemen carry out a variety of functions...
), conductor
Conductor (transportation)
A conductor is a member of a railway train's crew that is responsible for operational and safety duties that do not involve the actual operation of the train. The title of conductor is most associated with railway operations in North America, but the role of conductor is common to railways...
and finally, engineer. In the United States
United States
The United States of America is a federal constitutional republic comprising fifty states and a federal district...
the engineer is required to be certified and re-certified every 2–3 years.

In India
India
India , officially the Republic of India , is a country in South Asia. It is the seventh-largest country by geographical area, the second-most populous country with over 1.2 billion people, and the most populous democracy in the world...
, an engine driver starts as a Diesel Assistant or Electrical Assistant (in case of electric locomotives). They then get promoted on a scale: B, A, and A Special. An 'A Special' driver drives the faster, more important trains.

In the United States
United States
The United States of America is a federal constitutional republic comprising fifty states and a federal district...
, Canada
Canada
Canada is a North American country consisting of ten provinces and three territories. Located in the northern part of the continent, it extends from the Atlantic Ocean in the east to the Pacific Ocean in the west, and northward into the Arctic Ocean...
, and New Zealand
New Zealand
New Zealand is an island country in the south-western Pacific Ocean comprising two main landmasses and numerous smaller islands. The country is situated some east of Australia across the Tasman Sea, and roughly south of the Pacific island nations of New Caledonia, Fiji, and Tonga...
, train drivers are known as "locomotive engineers". In the United Kingdom
United Kingdom
The United Kingdom of Great Britain and Northern IrelandIn the United Kingdom and Dependencies, other languages have been officially recognised as legitimate autochthonous languages under the European Charter for Regional or Minority Languages...
, South Africa
South Africa
The Republic of South Africa is a country in southern Africa. Located at the southern tip of Africa, it is divided into nine provinces, with of coastline on the Atlantic and Indian oceans...
, and Australia
Australia
Australia , officially the Commonwealth of Australia, is a country in the Southern Hemisphere comprising the mainland of the Australian continent, the island of Tasmania, and numerous smaller islands in the Indian and Pacific Oceans. It is the world's sixth-largest country by total area...
, they are known as "train drivers", "engine drivers", "locomotive drivers", or "locomotive operators".

An engineer is responsible for preparing equipment for service, checking paperwork and the condition of the locomotives. Their duties require that they control acceleration, braking and handling of the train underway. They must know the physical characteristics of the railroad, including passenger stations
Train station
A train station, also called a railroad station or railway station and often shortened to just station,"Station" is commonly understood to mean "train station" unless otherwise qualified. This is evident from dictionary entries e.g...
, the incline and decline of the right-of-way and speed limits. Along with the conductor, the engineer monitors time to not fall behind schedule, nor leave stations early. The train's speed must be reduced when following other trains, approaching route diversions, or regulating time over road to avoid arriving too early. The engineer assumes the duties of the conductor if the conductor is incapacitated.

The locomotive engineer is required to have an intimate knowledge of track geometry including signal placement so as to be able to safely control their train.

Maintaining concentration is of critical importance in this role.

Train dynamics can be extreme and therefore an engineer must be familiar with train handling techniques so as to avoid train partings, derailment
Derailment
A derailment is an accident on a railway or tramway in which a rail vehicle, or part or all of a train, leaves the tracks on which it is travelling, with consequent damage and in many cases injury and/or death....
s and not exceeding line speed.

Freight trains typically have different train forces from passenger trains. A typical freight train may have 500 tonnes of locomotive weight at the front. That may be followed by 1500m of wagons
Railroad car
A railroad car or railway vehicle , also known as a bogie in Indian English, is a vehicle on a rail transport system that is used for the carrying of cargo or passengers. Cars can be coupled together into a train and hauled by one or more locomotives...
. The wagons may or may not be uniformly loaded and may brake differently.

Severe brake applications can combine with these factors to cause a train parting. Therefore good train handling practice for freight trains is usually to keep the consist
Consist
A consist , in North American railway terminology, is used as a noun to describe the group of rail vehicles that make up a train. A near-equivalent UK term is rake but this excludes the locomotive....
(rail vehicles which make up a train) stretched. This is achieved by keeping the consist in power while a brake application is made and by bleeding the air off the locomotives brakes before they apply. It is not possible to do this with the use of dynamic brake, which presents its own train handling challenges.

When there are multiple locomotives
Multiple-unit train control
Multiple-unit train control, sometimes abbreviated to multiple-unit or MU, is a method of simultaneously controlling all the traction equipment in a train from a single location, whether it is a Multiple unit comprising a number of self-powered passenger cars or a set of locomotives.A set of...
, some may be set up to brake like wagons instead of locomotives, as too many locomotives on the front of the train (all with brakes bled off) would require too heavy an application from the rest.

On shorter passenger trains, this is even more noticeable, requiring the first application of the brake to be bled off on the locomotive, applying locomotive brakes with subsequent increases in application. The length and make-up of the slowing or stopping distance dictates just how much locomotive brake application should be allowed to apply.

The use of dynamic brake can result in a severe slack action
Slack action
In railroading, slack action is the amount of free movement of one car before it transmits its motion to an adjoining coupled car. This free movement results from the fact that in railroad practice cars are loosely coupled, and the coupling is often combined with a shock-absorbing device, a "draft...
, When engaged run in is highly possible if brought in at an inappropriate time (regarding track geometry and train speed) and if disengaged at an inappropriate time can result in a run out. Both can potentially snap train drawgear.

Straightlining is a potential cause of derailment that train handling techniques must take into account in order to reduce the likelihood of occurrence. When a train rounds a curve basic physics dictates the trailing wagons in the consist will try to take the shortest route and the flange on some of the wheels within the consist could potentially fail to prevent this occurring with the resultant effect being a derailment.

Serial braking is where a train descends a grade on the air brake alone. The brake pipe application is gradually increased to slow down and if required (depending on the weight of the train and on the grade) stop the train so as to allow the locomotive compressors to recharge the brake pipe throughout the consist. In these cases it is permissible to use the locomotive brakes (which are independent of the train brake and charged through the main reservoir directly) to hold the train (In some cases the weight of the trailing consist will not be held on the locomotive brakes alone) slowing the rate of acceleration and giving more time to recharge the brake pipe to give a better application in the next subsequent train brake application. A runaway can occur if a brake application is required before the train pipe has recharged (as happened at Cima Hill in the United States).

A split reduction is where a train brake application is made and gradually increased as the train descends the grade. It is different to serial braking in that with Serial Braking the application is released, the brake pipe recharged then reapplied.

The dynamic brake when operable slows down the rate of acceleration and allows longer for a train brake pipe to be recharged before being required to be re applied. When a train descends a grade utilizing both the dynamic and air brakes the procedure is known as 'maintaining braking'.

In the case of severe grades (for example the Westmere Bank in New Zealand, which is a 1:33 grade with a 40 km/h (24.9 mph)speed limit) a trains allowable speed is lower for a train that doesn't have dynamic brake than for one that does.

In freight train marshalling yards the wagon brakes are sometimes bled off so they can be easily loose shunted. However when a shunt locomotive moves large numbers of wagons around with no brakes the locomotive must brake for the entire train. This can result in severe slack action and wheel slip. Damage to goods and rolling stock is possible. Also, with unbraked wagons there is potential for a runaway.