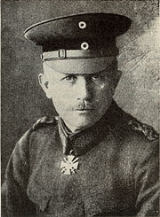 Von der Goltz was born in Züllichau, Brandenburg
Brandenburg
Brandenburg is one of the sixteen federal-states of Germany. It lies in the east of the country and is one of the new federal states that were re-created in 1990 upon the reunification of the former West Germany and East Germany. The capital is Potsdam...
. A Major-General commanding the German infantry division of Guards on Foot in France
France
The French Republic , The French Republic , The French Republic , (commonly known as France , is a unitary semi-presidential republic in Western Europe with several overseas territories and islands located on other continents and in the Indian, Pacific, and Atlantic oceans. Metropolitan France...
, von der Goltz was transferred to Finland in March 1918 to help the nationalist government in the civil war
Finnish Civil War
The Finnish Civil War was a part of the national, political and social turmoil caused by World War I in Europe. The Civil War concerned control and leadership of The Grand Duchy of Finland as it achieved independence from Russia after the October Revolution in Petrograd...
against the Finnish "Reds" and Soviet Russian
Russian Soviet Federative Socialist Republic
The Russian Soviet Federative Socialist Republic , commonly referred to as Soviet Russia, Bolshevik Russia, or simply Russia, was the largest, most populous and economically developed republic in the former Soviet Union....
troops. He commanded the German expedition unit ("Baltic Sea Division
Baltic Sea Division
The Baltic Sea Division was a 10,000 man German military unit commanded by Rüdiger von der Goltz. During the Finnish Civil War, in April 1918, it landed at Hanko and moved towards Helsinki and Lahti. The Baltic Sea Division quickly took back Helsinki from the Social Democrats of Finland, who had...
") which landed at Hanko, Finland, between April 3-April 5, 1918, and then marched on the socialist-controlled capital Helsinki
Helsinki
Helsinki is the capital and largest city in Finland. It is in the region of Uusimaa, located in southern Finland, on the shore of the Gulf of Finland, an arm of the Baltic Sea. The population of the city of Helsinki is , making it by far the most populous municipality in Finland. Helsinki is...
, which surrendered on April 13, 1918. The German military intervention enabled the nationalist government of Finland to gain control over most of the country by May 1918.

After the November 11, 1918, armistice
Armistice with Germany (Compiègne)
The armistice between the Allies and Germany was an agreement that ended the fighting in the First World War. It was signed in a railway carriage in Compiègne Forest on 11 November 1918 and marked a victory for the Allies and a complete defeat for Germany, although not technically a surrender...
, the Inter-Allied Commission of Control
Military Inter-Allied Commission of Control
The term Military Inter-Allied Commission of Control was used in a series of peace treaties concluded after the First World War between different countries...
insisted that the German troops remain in the Baltic states
Baltic states
The term Baltic states refers to the Baltic territories which gained independence from the Russian Empire in the wake of World War I: primarily the contiguous trio of Estonia, Latvia, Lithuania ; Finland also fell within the scope of the term after initially gaining independence in the 1920s.The...
to prevent the region from being re-occupied by the Red Army
Red Army
The Workers' and Peasants' Red Army started out as the Soviet Union's revolutionary communist combat groups during the Russian Civil War of 1918-1922. It grew into the national army of the Soviet Union. By the 1930s the Red Army was among the largest armies in history.The "Red Army" name refers to...
. As many of the demoralised German soldiers were being withdrawn from Latvia, a Freikorps
Freikorps
Freikorps are German volunteer military or paramilitary units. The term was originally applied to voluntary armies formed in German lands from the middle of the 18th century onwards. Between World War I and World War II the term was also used for the paramilitary organizations that arose during...
unit called the Iron Division
Freikorps in the Baltic
After 1918, the term Freikorps was used for the paramilitary organizations that sprang up around the German Empire, including in the Baltic states as soldiers returned in defeat from World War I...
(Eiserne Division) was formed and deployed in Riga
Riga
Riga is the capital and largest city of Latvia. With 702,891 inhabitants Riga is the largest city of the Baltic states, one of the largest cities in Northern Europe and home to more than one third of Latvia's population. The city is an important seaport and a major industrial, commercial,...
and used to delay the Red advance. New volunteers arriving from Germany and remnants of the German 8th Army were subsequently added to the Iron Division, which was assigned under the command of von der Goltz. Also, Baltic Germans and some Latvians
Latvians
Latvians or Letts are the indigenous Baltic people of Latvia.-History:Latvians occasionally refer to themselves by the ancient name of Latvji, which may have originated from the word Latve which is a name of the river that presumably flowed through what is now eastern Latvia...
formed the Baltische Landeswehr
Baltische Landeswehr
Baltische Landeswehr was the name of the unified armed forces of the Couronian and Livonian nobility from 7 December 1918 to 3 July 1919.- Command structure :...
, led by Major Alfred Fletcher.

In late February 1919, only the seaport of Liepāja
Liepaja
Liepāja ; ), is a republican city in western Latvia, located on the Baltic Sea directly at 21°E. It is the largest city in the Kurzeme Region of Latvia, the third largest city in Latvia after Riga and Daugavpils and an important ice-free port...
remained in the hands of the German and Latvian forces. In March 1919, General von der Goltz was able to win a series of victories over the Red Army, first occupying Ventspils
Ventspils
Ventspils is a city in northwestern Latvia in the Courland historical region of Latvia, the sixth largest city in the country. As of 2006, Ventspils had a population of 43,806. Ventspils is situated on the Venta River and the Baltic Sea, and has an ice-free port...
, the major port of Courland
Courland
Courland is one of the historical and cultural regions of Latvia. The regions of Semigallia and Selonia are sometimes considered as part of Courland.- Geography and climate :...
, and then advancing south and east to retake Riga.

After the Bolsheviks had been driven out from most of Latvia, the Allies ordered the German government to withdraw its troops from the Baltic region. However, the Germans succeeded in negotiating a postponement, arguing that this would have given the Bolsheviks a free hand. General von der Goltz then attempted to seize control of Latvia with the assistance of the local German population. The Latvian nationalist government was deposed while the Freikorps, Latvian and White Russian
White movement
The White movement and its military arm the White Army - known as the White Guard or the Whites - was a loose confederation of Anti-Communist forces.The movement comprised one of the politico-military Russian forces who fought...
units moved on to capture Riga on May 23, 1919. The Latvian nationalists sought assistance from the Estonia
Estonia
Estonia , officially the Republic of Estonia , is a state in the Baltic region of Northern Europe. It is bordered to the north by the Gulf of Finland, to the west by the Baltic Sea, to the south by Latvia , and to the east by Lake Peipsi and the Russian Federation . Across the Baltic Sea lies...
n army which had been occupying northern Latvia since earlier that year.

In June 1919, General von der Goltz ordered his troops not to advance east against the Red Army, as the Allies had been expecting, but north, against the Estonians. On June 19, the Iron Division and Landeswehr units launched an attack to capture areas around Cēsis (Wenden)
Cesis
Cēsis , is a town in Latvia located in the northern part of the Central Vidzeme Upland. Cēsis is on the Gauja River valley, and is built on a series of ridges above the river overlooking the woods below...
, however, in the battles over the following few days, they were defeated by the 3rd Estonian Division (led by Ernst Põdder
Ernst Põdder
Ernst Põdder VR I/1 was a famous Estonian military commander in the Estonian War of Independence....
). On the morning of June 23, the Germans began a general retreat toward Riga. The Allies again insisted that the Germans withdraw their remaining troops from Latvia and intervened to impose a ceasefire between the Estonians and the Freikorps when the Estonians were about to march into Riga. The British insisted that General von der Goltz leave Latvia, and he turned his troops over to the West Russian Volunteer Army
West Russian Volunteer Army
The West Russian Volunteer Army or Bermontians was an army in the Baltic provinces of the former Russian Empire during the Russian Civil War of 1918-1920....
.

Count von der Goltz later claimed in his memoirs that his major strategic goal in 1919 had been to launch a campaign in cooperation with the White Russian forces to overturn the Bolshevik regime by marching on St. Petersburg and to install a pro-German government in Russia.

Goltz also led troops as part of the 1920 Kapp Putsch
Kapp Putsch
The Kapp Putsch — or more accurately the Kapp-Lüttwitz Putsch — was a 1920 coup attempt during the German Revolution of 1918–1919 aimed at overthrowing the Weimar Republic...
. In the interwar years he was part of the right wing Harzburg Front
Harzburg Front
The Harzburg Front was a short-lived right-wing political alliance in Weimar Germany, formed in 1931 as an attempt to present a unified opposition to the government of Chancellor Heinrich Brüning...
, and in 1934 and was leader of the largely politically uninfluential right wing German State Party
German State Party
The German State Party was a short-lived German political party of the Weimar Republic, formed by the merger of the German Democratic Party with the People's National Reich Association in July 1930...
.

He was married to Hannah Caroline von Hase (1873–1941), a granddaughter of Karl von Hase. A son of the same name, Rüdiger von der Goltz, was a lawyer. He died in the Kinsegg estate, village of Bernbeuren
Bernbeuren
Bernbeuren is a municipality in the Weilheim-Schongau district, in Bavaria, Germany....
, Germany
Germany
Germany , officially the Federal Republic of Germany , is a federal parliamentary republic in Europe. The country consists of 16 states while the capital and largest city is Berlin. Germany covers an area of 357,021 km2 and has a largely temperate seasonal climate...
.