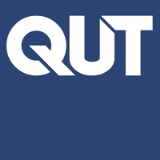 Encyclopedia
Queensland University of Technology (QUT) is an Australian university with an applied emphasis in courses and research. Based in Brisbane
Brisbane
Brisbane is the capital and most populous city in the Australian state of Queensland and the third most populous city in Australia. Brisbane's metropolitan area has a population of over 2 million, and the South East Queensland urban conurbation, centred around Brisbane, encompasses a population of...
, it has 40,000 students, including 6,000 international students, over 4,000 staff members, and an annual budget of more than A$750 million. 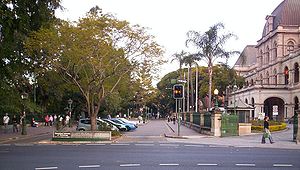 A number of QUT courses are accredited by professional bodies, which ensures the development and maintenance of standards, best practice principles, and resources.

Specifically, the QUT Business School is accredited with AMBA
Association of MBAs
The Association of MBAs is a London-based international organization that accredits postgraduate business programs at business schools worldwide. The Association is one of the three main global accreditation bodies in business education and styles itself "the world's impartial authority on...
, EQUIS
European Quality Improvement System
The European Quality Improvement System is a school accreditation system. It specializes in higher education institutions of management and business administration, run by the European Foundation for Management Development...
, and AACSB
Association to Advance Collegiate Schools of Business
The Association to Advance Collegiate Schools of Business was founded in 1916 to accredit schools of business worldwide. The first accreditations took place in 1919. The stated mission is to advance quality management education worldwide through accreditation and thought leadership. It is regarded...
, making it one of very few business schools in the world, and the first in Australia, to obtain this Triple Crown of international accreditation.
QUT's MBA program
Brisbane Graduate School of Business
The QUT Business School is one of the five schools in the Faculty of Business at the Queensland University of Technology.The university was established in 1908 and QUT Business School was established in 1995. The school offers a Master of Business Administration program and a Graduate Certificate...
is also the only Queensland MBA program (and one of only three Australian programs) to have ever been listed in the FT Top 100 rankings (in 2004 at no. 82).

QUT is committed to establishing collaborative partnerships that result in industry, government, and community solutions. QUT has an established track record in attracting national grants and industry funding.


Institute for Creative Industries and Innovation

The Institute for Creative Industries and Innovation (iCi) is a multidisciplinary research centre that draws research from the faculties of Creative Industries, Law, Business, Science and Technology, Education, and Built Environment and Engineering. The institute has nurtured over 20 research projects that focus on creative, digital, and innovative solutions.


Institute of Health and Biomedical Innovation

The Institute of Health and Biomedical Innovation (IHBI) is a collaborative institute based at QUT devoted to improving the health of individuals through research innovation. IHBI’s researchers focus on three broad health areas: prevention, mind and body, and recovery, and draw from the faculties of Health, Science and Technology, and Built Environment and Engineering.

The Institute for Sustainable Resources (ISR) develops and manages projects in the fast-paced research area of sustainability. The Institute’s research informs technological, social, and policy solutions to the sustainable use of natural resources and adaptive responses to the impacts of climate change.

QUT's Information Security Institute (ISI) is a multidisciplinary institute that builds real solutions for government, business, and the community by undertaking research in technology, legal, policy and governance issues related to information security.

ISI combines research from the faculties of Built Environment and Engineering, Business, Science and Technology, and Law.

QUT has three campuses, each QUT campus is a micro-community, with on-campus academic, recreational, and support facilities.

Kelvin Grove campus hosts the faculties of Creative Industries, Education, and Health as well as the QUT International College and the Institute of Health and Biomedical Innovation.

Kelvin Grove campus is the location of QUT Health Clinics, which offer services for free or low-cost to staff, students, and the general public:

In November 2008, Carseldine teaching, research, and support activities were relocated to Kelvin Grove and Gardens Point campuses. This included the School of Psychology and Counselling and the Humanities Program, as well as some Business, Science, and Information Technology subjects. The campus has since been abandoned and is awaiting a new tenant.

A number of transport options are available to staff, students, and visitors of QUT.

QUT Student Guild provides information, support, and assistance for a number of issues.