Encyclopedia
The QF 1 pounder, universally known as the pom-pom, was an early 37 mm British
United Kingdom
The United Kingdom of Great Britain and Northern IrelandIn the United Kingdom and Dependencies, other languages have been officially recognised as legitimate autochthonous languages under the European Charter for Regional or Minority Languages...
autocannon
Autocannon
An autocannon or automatic cannon is a rapid-fire projectile weapon firing a shell as opposed to the bullet fired by a machine gun. Autocannons often have a larger caliber than a machine gun . Usually, autocannons are smaller than a field gun or other artillery, and are mechanically loaded for a...
. It was used by several countries initially as an infantry gun and later as a light anti-aircraft gun. The name comes from the sound it makes when firing.

Hiram Maxim originally designed the Pom-Pom in the late 1880s as an enlarged version of the Maxim machine gun
Maxim gun
The Maxim gun was the first self-powered machine gun, invented by the American-born British inventor Sir Hiram Maxim in 1884. It has been called "the weapon most associated with [British] imperial conquest".-Functionality:...
. Its longer range necessitated exploding projectiles to judge range, which in turn dictated a shell weight of at least 400 gram (0.88184904873951 lb), as that was the lightest exploding shell allowed under the St. Petersburg Declaration of 1868 and reaffirmed in the Hague Convention of 1899
Hague Conventions (1899 and 1907)
The Hague Conventions were two international treaties negotiated at international peace conferences at The Hague in the Netherlands: The First Hague Conference in 1899 and the Second Hague Conference in 1907...
.

In response, Vickers-Maxim of Britain shipped either 57 or 50 guns out to the British Army
British Army
The British Army is the land warfare branch of Her Majesty's Armed Forces in the United Kingdom. It came into being with the unification of the Kingdom of England and Scotland into the Kingdom of Great Britain in 1707. The new British Army incorporated Regiments that had already existed in England...
in South Africa, with the first three arriving in time for the Battle of Paardeberg
Battle of Paardeberg
The Battle of Paardeberg or Perdeberg was a major battle during the Second Anglo-Boer War. It was fought near Paardeberg Drift on the banks of the Modder River in the Orange Free State near Kimberley....
of February 1900. These early Mk I versions were mounted on typical field gun
Field gun
A field gun is an artillery piece. Originally the term referred to smaller guns that could accompany a field army on the march and when in combat could be moved about the battlefield in response to changing circumstances, as to opposed guns installed in a fort, or to siege cannon or mortars which...
type carriages.

In World War I, it was used as an early anti-aircraft gun in the home defence of Britain. It was adapted as the Mk I*** and Mk II on high-angle pedestal
Pedestal
Pedestal is a term generally applied to the support of a statue or a vase....
mountings and deployed along London docks and on rooftops on key buildings in London, others on mobile motor lorries at key towns in the East and Southeast of England. 25 were employed in August 1914, and 50 in February 1916. The Mk II gun at the top of this page on Naval pedestal mounting was the first to open fire in defence of London during the war. However, the small shell was insufficient to damage the German Zeppelin
Zeppelin
A Zeppelin is a type of rigid airship pioneered by the German Count Ferdinand von Zeppelin in the early 20th century. It was based on designs he had outlined in 1874 and detailed in 1893. His plans were reviewed by committee in 1894 and patented in the United States on 14 March 1899...
airships sufficiently to bring them down. The Ministry of Munitions noted in 1922: "The pom-poms were of very little value. There was no shrapnel available for them, and the shell provided for them would not burst on aeroplane fabric but fell back to earth as solid projectiles... were of no use except at a much lower elevation than a Zeppelin attacking London was likely to keep".

Nevertheless, Lieutenant O.F.J. Hogg of No. 2 AA Section in III Corps was the first anti-aircraft gunner to shoot down an aircraft, with 75 rounds on 23 September 1914 in France.

The British Army did not employ it as an infantry weapon in World War I, as its shell was considered too small for use against any objects or fortifications and British doctrine relied on shrapnel fired by QF 13 pounder and 18-pounder field guns as its primary medium range anti-personnel weapon.

The gun was tried with only limited success mounted on aircraft as the lighter 1-pounder Mk III, and was quickly replaced by the larger QF 1½ pounder and QF 2 pounder
QF 2 pounder naval gun
The 2-pounder gun, officially designated the QF 2-pounder and universally known as the pom-pom, was a 1.575 inch British autocannon, used famously as an anti-aircraft gun by the Royal Navy. The name came from the sound that the original models make when firing...
naval guns as a light anti-aircraft gun.

The British are reported to have initially used some Common pointed shells (semi-armour piercing, with fuze in the shell base) in the Boer War, in addition to the standard Common shell. However, the common pointed shell proved unsatisfactory, with the base fuze frequently working loose and falling out during flight. In 1914, the cast-iron common shell and tracer were the only available rounds.

A version was produced in Germany for both Navy and Army.

In World War I, it was used in Europe as an anti-aircraft gun as the Maxim Flak M14. Four guns were used mounted on field carriages in the German campaign in South West Africa in 1915, against South African forces.

The Belgian Army used the gun on a high-angle field carriage mounting. 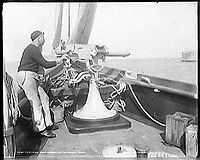