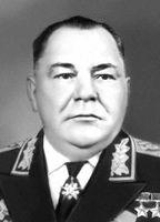 Koshevoi was born to a peasant Ukrainian Cossack family and joined the Red Army
Red Army
The Workers' and Peasants' Red Army started out as the Soviet Union's revolutionary communist combat groups during the Russian Civil War of 1918-1922. It grew into the national army of the Soviet Union. By the 1930s the Red Army was among the largest armies in history.The "Red Army" name refers to...
in 1920

He took part in the Russian Civil War
Russian Civil War
The Russian Civil War was a multi-party war that occurred within the former Russian Empire after the Russian provisional government collapsed to the Soviets, under the domination of the Bolshevik party. Soviet forces first assumed power in Petrograd The Russian Civil War (1917–1923) was a...
and commanded a corps during the second world war
Eastern Front (World War II)
The Eastern Front of World War II was a theatre of World War II between the European Axis powers and co-belligerent Finland against the Soviet Union, Poland, and some other Allies which encompassed Northern, Southern and Eastern Europe from 22 June 1941 to 9 May 1945...
taking part in the defense of Stalingrad, the Liberation of the Crimea and the capture of East Prussia. He was awarded the title of Hero of the Soviet Union
Hero of the Soviet Union
The title Hero of the Soviet Union was the highest distinction in the Soviet Union, awarded personally or collectively for heroic feats in service to the Soviet state and society.-Overview:...
twice - in 1944, for the taking of Sapun-gora
Sapun-gora
Sapun-gora — is a ridge to the southeast of Sevastopol, in Crimea, Ukraine.It became the arena of fierce battle during the siege of Sevastopol , and also during its recapturing in 1944....
(called a key to Sevastopol
Sevastopol
Sevastopol is a city on rights of administrative division of Ukraine, located on the Black Sea coast of the Crimea peninsula. It has a population of 342,451 . Sevastopol is the second largest port in Ukraine, after the Port of Odessa....
) and in 1945, for his part in the capture of Königsberg
Königsberg
Königsberg was the capital of East Prussia from the Late Middle Ages until 1945 as well as the northernmost and easternmost German city with 286,666 inhabitants . Due to the multicultural society in and around the city, there are several local names for it...
.