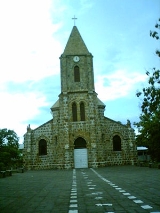 Encyclopedia
Puntarenas is the capital and largest city
City
A city is a relatively large and permanent settlement. Although there is no agreement on how a city is distinguished from a town within general English language meanings, many cities have a particular administrative, legal, or historical status based on local law.For example, in the U.S...
in the province Puntarenas
Puntarenas Province
Puntarenas is a province of Costa Rica. It is located in the western part of the country, covering most of Costa Rica's Pacific Ocean coast, and it is the largest province in Costa Rica. Clockwise from the northwest it borders on the provinces Guanacaste, Alajuela, San José and Limón, and the...
, Costa Rica
Costa Rica
Costa Rica , officially the Republic of Costa Rica is a multilingual, multiethnic and multicultural country in Central America, bordered by Nicaragua to the north, Panama to the southeast, the Pacific Ocean to the west and the Caribbean Sea to the east....
, at the Pacific coast. The eponymous and oddly shaped province has its largest section in the South, far from the capital.

Some 100,000 live in the city and close towns. With beaches on the Pacific Ocean
Pacific Ocean
The Pacific Ocean is the largest of the Earth's oceanic divisions. It extends from the Arctic in the north to the Southern Ocean in the south, bounded by Asia and Australia in the west, and the Americas in the east.At 165.2 million square kilometres in area, this largest division of the World...
, it also attracts many tourists
Tourism
Tourism is travel for recreational, leisure or business purposes. The World Tourism Organization defines tourists as people "traveling to and staying in places outside their usual environment for not more than one consecutive year for leisure, business and other purposes".Tourism has become a...
, especially surfers. It is also a possible stopover point for the touristy Monteverde
Monteverde
Monteverde, Costa Rica is a small town in Puntarenas, Costa Rica. Located in the Cordillera de Tilarán, roughly a four hour drive from the Central Valley of Costa Rica, Monteverde is considered a major ecotourism destination in Costa Rica...
, further inland.

Its port
Port
A port is a location on a coast or shore containing one or more harbors where ships can dock and transfer people or cargo to or from land....
, Caldera, is one of the main ports in the country. Also, regularly scheduled ferries carry vehicles from Puntarenas to the Nicoya Peninsula
Nicoya Peninsula
The Nicoya Peninsula is a peninsula on the Pacific coast of Costa Rica and lies in the Guanacaste Province in the north, and the Puntarenas Province in the south. It is located at . It varies from 19 to wide and is approximately long, and forms the largest peninsula in the country. It is known...
,

First known as Villa Bruselas in colonial times, Puntarenas was discovered by Hernán Ponce de León in 1519. Despite the use of the Gulf of Nicoya
Gulf of Nicoya
The Gulf of Nicoya is an inlet of the Pacific Ocean. It separates the Nicoya Peninsula from the mainland of Costa Rica, and encompasses a marine and coastal landscape of wetlands, rocky islands and cliffs.-Islands:*Chira Island*Venado Island*Isla Caballo...
as an entryway to Costa Rica's inland territory, the port of Puntarenas was not developed until 1840 when coffee
Coffee
Coffee is a brewed beverage with a dark,init brooo acidic flavor prepared from the roasted seeds of the coffee plant, colloquially called coffee beans. The beans are found in coffee cherries, which grow on trees cultivated in over 70 countries, primarily in equatorial Latin America, Southeast Asia,...
production in the highlands reached exportable volumes. In 1845 the Congress of the Republic declared Puntarenas a duty free port (with the exception of Cognac
Cognac (drink)
Cognac , named after the town of Cognac in France, is a variety of brandy. It is produced in the wine-growing region surrounding the town from which it takes its name, in the French Departements of Charente and Charente-Maritime....
and hard liquor). Originally, the coffee was brought to port in oxcarts via a trail through the mountains. In 1879, a stretch of railroad track was completed which connected Puntarenas with the town of Esparza
Esparza Canton
Esparza is the name of the second canton in the province of Puntarenas in Costa Rica. The canton covers an area of 216.80 km², and has a population of 25,503. Its capital city is also called Esparza....
(one of the country's earliest Spanish settlements, founded in 1554, a decade before the Central Valley
Costa Rican Central Valley
The Central Valley is a plateau and a geographic region of central Costa Rica. The land in the valley is a relative plain, despite being surrounded by several mountains and volcanos, the latter part of the Central Range. The region houses almost three quarters of Costa Ricans, and includes the...
began to be colonized) where the oxcart trail came out of the mountains. Eventually, the railroad was built all the way through to San José
San José, Costa Rica
San José is the capital and largest city of Costa Rica. Located in the Central Valley, San José is the seat of national government, the focal point of political and economic activity, and the major transportation hub of this Central American nation.Founded in 1738 by order of Cabildo de León, San...
and service was inaugurated in 1910.

With the railroad connection to the Central Valley, the Pacific port's activities continued to be a major part of the region's economy throughout the 20th century. However, due to the aging and deterioration of the port facilities and the need to accommodate the much larger vessels of modern shipping fleets, a new port was constructed in the 1980s to the south of Puntarenas. The site chosen was Caldera, where ships had anchored during colonial times.