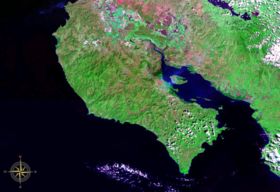 The Nicoya Peninsula is a peninsula
Peninsula
A peninsula is a piece of land that is bordered by water on three sides but connected to mainland. In many Germanic and Celtic languages and also in Baltic, Slavic and Hungarian, peninsulas are called "half-islands"....
on the Pacific coast of Costa Rica
Costa Rica
Costa Rica , officially the Republic of Costa Rica is a multilingual, multiethnic and multicultural country in Central America, bordered by Nicaragua to the north, Panama to the southeast, the Pacific Ocean to the west and the Caribbean Sea to the east....
and lies in the Guanacaste Province
Guanacaste Province
Guanacaste is a province of Costa Rica located in the northwestern part of the country, along the coast of the Pacific Ocean. To the north it borders Nicaragua. To the east is the Alajuela Province, and to the southeast is the Puntarenas Province. It is the most sparsely populated of all the...
in the north, and the Puntarenas Province
Puntarenas Province
Puntarenas is a province of Costa Rica. It is located in the western part of the country, covering most of Costa Rica's Pacific Ocean coast, and it is the largest province in Costa Rica. Clockwise from the northwest it borders on the provinces Guanacaste, Alajuela, San José and Limón, and the...
in the south. It is located at 10°N 85.4166667°W. It varies from 19 to 37 miles (59.5 km) wide and is approximately 75 miles (120.7 km) long, and forms the largest peninsula in the country. It is known for its beaches and is a popular tourist destination. The main transport and commercial centre in the region is Nicoya
Nicoya
Nicoya is a town in Costa Rica's Guanacaste province, and one of its most important tourist zones. It serves as a transport hub to Guanacaste's beaches and national parks. According to the 2000 census, the city's population was 13,334—second only to Liberia in the province...
, one of the oldest settlements in Costa Rica.

Other notable settlements and places of interest in the area include (going roughly from north to south): Tamarindo
Tamarindo, Costa Rica
Tamarindo is a town and distrito located on the Northern Pacific coast of Costa Rica in the Province of Guanacaste. The district has a population of 3,525, although the town itself is about 500. But it can swell to 5,000 people or more during the tourist season and during special holidays...
, Santa Cruz, Nosara
Nosara
Nosara is a city in the Nicoya canton, Guanacaste province of Costa Rica on the Pacific Coast.-Geography and demographics:Despite the Nicoya peninsula being one of the last locations with large areas of unpaved roads in Costa Rica, Nosara is one of the oldest expatriate communities in the country,...
, Sámara, Naranjo
Naranjo de Alajuela
Naranjo is the capital city of the canton of Naranjo in the province of Alajuela in Costa Rica. It is also the name of the distrito that includes the city...
, Paquera, Curu, Tambor, Montezuma
Montezuma, Costa Rica
Montezuma is a town in Puntarenas Province, Costa Rica which began as a remote fishing village and has gained popularity since the 1980s among tourists on a budget....
, Santa Teresa
Santa Teresa, Costa Rica
Santa Teresa is a small town in Puntarenas Province, Costa Rica. It is located about west of the capital city of San José. Like other coastal villages on the Nicoya Peninsula, Santa Teresa started as a remote fishing village, relying on agriculture, cattle ranching and small- scale fishing...
, Mal Pais
Malpais, Costa Rica
Malpais is a town in Puntarenas Province, Costa Rica which began as a fishing and cattle-farming village, and has become popular among surfers and adventure travelers around the world...
.