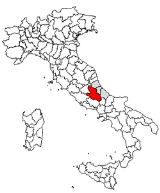 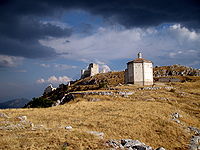 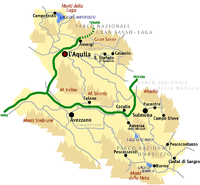 Earthquakes mark the history of the province, especially its capital city L'Aquila. which was stricken by earthquakes in the 14th, 15th, and 16th centuries and most recently on April 6, 2009 causing extensive damage to the city and areas of the province just outside l'Aquila, particularly along SS 17. At 01:32 GMT (03:32 CEST) on April 6 an earthquake of 6.3 magnitude
Moment magnitude scale
The moment magnitude scale is used by seismologists to measure the size of earthquakes in terms of the energy released. The magnitude is based on the seismic moment of the earthquake, which is equal to the rigidity of the Earth multiplied by the average amount of slip on the fault and the size of...
struck central Italy with its epicentre near L'Aquila, at 42.4228°N 13.3945°W.