Encyclopedia
The Province of East Prussia ( ˈʔɔstˌpʁɔʏsən) was a province
Provinces of Prussia
The Provinces of Prussia constituted the main administrative divisions of Prussia. Following the dissolution of the Holy Roman Empire in 1806 and the Congress of Vienna in 1815 the various princely states in Germany gained their nominal sovereignty, but the reunification process that culminated in...
of Prussia
Prussia
Prussia was a German kingdom and historic state originating out of the Duchy of Prussia and the Margraviate of Brandenburg. For centuries, the House of Hohenzollern ruled Prussia, successfully expanding its size by way of an unusually well-organized and effective army. Prussia shaped the history...
from 1773–1829 and 1878-1945. Composed of the historical region East Prussia
East Prussia
East Prussia is the main part of the region of Prussia along the southeastern Baltic Coast from the 13th century to the end of World War II in May 1945. From 1772–1829 and 1878–1945, the Province of East Prussia was part of the German state of Prussia. The capital city was Königsberg.East Prussia...
, the province's capital was Königsberg (Kaliningrad)
Kaliningrad
Kaliningrad is a seaport and the administrative center of Kaliningrad Oblast, the Russian exclave between Poland and Lithuania on the Baltic Sea...
.

East Prussia was formed in 1773 out of the territory of the former Duchy of Prussia; neighboring West Prussia
West Prussia
West Prussia was a province of the Kingdom of Prussia from 1773–1824 and 1878–1919/20 which was created out of the earlier Polish province of Royal Prussia...
was formed out of the former Polish
Polish-Lithuanian Commonwealth
The Polish–Lithuanian Commonwealth was a dualistic state of Poland and Lithuania ruled by a common monarch. It was the largest and one of the most populous countries of 16th- and 17th‑century Europe with some and a multi-ethnic population of 11 million at its peak in the early 17th century...
Royal Prussia
Royal Prussia
Royal Prussia was a Region of the Kingdom of Poland and of the Polish-Lithuanian Commonwealth . Polish Prussia included Pomerelia, Chełmno Land , Malbork Voivodeship , Gdańsk , Toruń , and Elbląg . It is distinguished from Ducal Prussia...
. East and West Prussia were first united in a personal union
Personal union
A personal union is the combination by which two or more different states have the same monarch while their boundaries, their laws and their interests remain distinct. It should not be confused with a federation which is internationally considered a single state...
in 1824, and then merged in a real union
Real union
Real union is a union of two or more states, which share some state institutions as in contrast to personal unions; however they are not as unified as states in a political union...
in 1829 to form the Province of Prussia
Province of Prussia
The Province of Prussia was a province of the Kingdom of Prussia from 1829-1878 created out of the provinces of East Prussia and West Prussia....
. The united province was then split into separate East and West Prussian provinces in 1878. 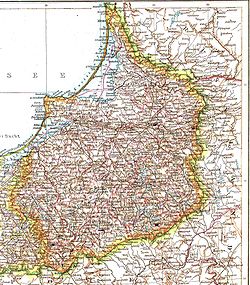 As a result of World War I
World War I
World War I , which was predominantly called the World War or the Great War from its occurrence until 1939, and the First World War or World War I thereafter, was a major war centred in Europe that began on 28 July 1914 and lasted until 11 November 1918...
, the Hohenzollern
House of Hohenzollern
The House of Hohenzollern is a noble family and royal dynasty of electors, kings and emperors of Prussia, Germany and Romania. It originated in the area around the town of Hechingen in Swabia during the 11th century. They took their name from their ancestral home, the Burg Hohenzollern castle near...
monarchy of the Kingdom of Prussia
Kingdom of Prussia
The Kingdom of Prussia was a German kingdom from 1701 to 1918. Until the defeat of Germany in World War I, it comprised almost two-thirds of the area of the German Empire...
was abolished in 1918, and the kingdom became the Free State of Prussia.

After the Treaty of Versailles
Treaty of Versailles
The Treaty of Versailles was one of the peace treaties at the end of World War I. It ended the state of war between Germany and the Allied Powers. It was signed on 28 June 1919, exactly five years after the assassination of Archduke Franz Ferdinand. The other Central Powers on the German side of...
, East Prussia was separated from Germany as an exclave
Enclave and exclave
In political geography, an enclave is a territory whose geographical boundaries lie entirely within the boundaries of another territory.An exclave, on the other hand, is a territory legally or politically attached to another territory with which it is not physically contiguous.These are two...
; the Memelland was also separated from the province. Because most of West Prussia became part of the Second Polish Republic
Second Polish Republic
The Second Polish Republic, Second Commonwealth of Poland or interwar Poland refers to Poland between the two world wars; a period in Polish history in which Poland was restored as an independent state. Officially known as the Republic of Poland or the Commonwealth of Poland , the Polish state was...
as the Polish Corridor
Polish Corridor
The Polish Corridor , also known as Danzig Corridor, Corridor to the Sea or Gdańsk Corridor, was a territory located in the region of Pomerelia , which provided the Second Republic of Poland with access to the Baltic Sea, thus dividing the bulk of Germany from the province of East...
, the formerly West Prussian Marienwerder region became part of East Prussia (as Regierungsbezirk Westpreußen). Also Soldau district in Allenstein region was part of Second Polish Republic.

After the 1939 Invasion of Poland
Invasion of Poland (1939)
The Invasion of Poland, also known as the September Campaign or 1939 Defensive War in Poland and the Poland Campaign in Germany, was an invasion of Poland by Germany, the Soviet Union, and a small Slovak contingent that marked the start of World War II in Europe...
by Nazi Germany
Nazi Germany
Nazi Germany , also known as the Third Reich , but officially called German Reich from 1933 to 1943 and Greater German Reich from 26 June 1943 onward, is the name commonly used to refer to the state of Germany from 1933 to 1945, when it was a totalitarian dictatorship ruled by...
opening World War II
World War II
World War II, or the Second World War , was a global conflict lasting from 1939 to 1945, involving most of the world's nations—including all of the great powers—eventually forming two opposing military alliances: the Allies and the Axis...
, the borders of East Prussia were revised. Regierungsbezirk Westpreußen became part of Reichsgau Danzig-West Prussia
Reichsgau Danzig-West Prussia
The Reichsgau Danzig-West Prussia was a Nazi German province created on 8 October 1939 from the territory of the annexed Free City of Danzig, the annexed Polish province Greater Pomeranian Voivodship , and the Nazi German Regierungsbezirk West Prussia of Gau East Prussia. Before 2 November 1939,...
, while Regierungsbezirk Zichenau
Zichenau (region)
Regierungsbezirk Zichenau was a Regierungsbezirk, or administrative region, of the Prussian Province of East Prussia from 1939-45. It is also referred to as South East Prussia...
was added to East Prussia. Originally part of the Zichenau region, the Sudauen district in Sudovia
Suvalkija
Suvalkija or Sudovia is the smallest of the five cultural regions of Lithuania. Its unofficial capital is Marijampolė. People from Suvalkija are called suvalkiečiai or suvalkietis . It is located south of the Neman River, in the former territory of Vilkaviškis bishopric...
was later transferred to the Gumbinnen region.

Following Nazi Germany
Nazi Germany
Nazi Germany , also known as the Third Reich , but officially called German Reich from 1933 to 1943 and Greater German Reich from 26 June 1943 onward, is the name commonly used to refer to the state of Germany from 1933 to 1945, when it was a totalitarian dictatorship ruled by...
's defeat in World War II
World War II
World War II, or the Second World War , was a global conflict lasting from 1939 to 1945, involving most of the world's nations—including all of the great powers—eventually forming two opposing military alliances: the Allies and the Axis...
in 1945, East Prussia was partitioned between Poland and the Soviet Union
Soviet Union
The Soviet Union , officially the Union of Soviet Socialist Republics , was a constitutionally socialist state that existed in Eurasia between 1922 and 1991....
according to the Potsdam Conference
Potsdam Conference
The Potsdam Conference was held at Cecilienhof, the home of Crown Prince Wilhelm Hohenzollern, in Potsdam, occupied Germany, from 16 July to 2 August 1945. Participants were the Soviet Union, the United Kingdom, and the United States...
. Southern East Prussia was placed under Polish administration, while northern East Prussia was divided between the Soviet republics of Russia (the Kaliningrad Oblast
Kaliningrad Oblast
Kaliningrad Oblast is a federal subject of Russia situated on the Baltic coast. It has a population of The oblast forms the westernmost part of the Russian Federation, but it has no land connection to the rest of Russia. Since its creation it has been an exclave of the Russian SFSR and then the...
) and Lithuania
Lithuanian SSR
The Lithuanian Soviet Socialist Republic , also known as the Lithuanian SSR, was one of the republics that made up the former Soviet Union...
(the constituent counties of the Klaipėda Region
Klaipėda Region
The Klaipėda Region or Memel Territory was defined by the Treaty of Versailles in 1920 when it was put under the administration of the Council of Ambassadors...
). The city of Königsberg was renamed Kaliningrad
Kaliningrad
Kaliningrad is a seaport and the administrative center of Kaliningrad Oblast, the Russian exclave between Poland and Lithuania on the Baltic Sea...
in 1946. The German
Germans
The Germans are a Germanic ethnic group native to Central Europe. The English term Germans has referred to the German-speaking population of the Holy Roman Empire since the Late Middle Ages....
population of the province largely evacuated
Evacuation of East Prussia
The evacuation of East Prussia refers to the evacuation of the German civilian population and military personnel in East Prussia and the Klaipėda region between 20 January, and March 1945, as part of the evacuation of German civilians towards the end of World War II...
during the war, but several hundreds of thousands died during the years 1944–46 and the remainder were subsequently expelled
Expulsion of Germans after World War II
The later stages of World War II, and the period after the end of that war, saw the forced migration of millions of German nationals and ethnic Germans from various European states and territories, mostly into the areas which would become post-war Germany and post-war Austria...
.