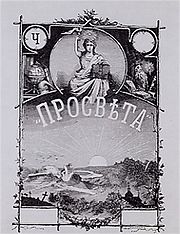 Prosvita is a society created in the nineteenth century in Ukrainian
Ukraine
Ukraine is a country in Eastern Europe. It has an area of 603,628 km², making it the second largest contiguous country on the European continent, after Russia...
Galicia for preserving and developing Ukrainian culture and education among population.

By the declaration of its founders, the movement was created as a counterbalance to anti-Ukrainian colonial and Russophile
Ukrainian Russophiles
The focus of this article is part of a general political movement in Western Ukraine of the nineteenth and early 20th century. The movement contained several competing branches: Moscowphiles, Ukrainophiles, Rusynphiles, and others....
trends in Ukrainian society of the period. 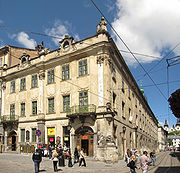 Prosvita was founded in 1868 in Lviv
Lviv
Lviv is a city in western Ukraine. The city is regarded as one of the main cultural centres of today's Ukraine and historically has also been a major Polish and Jewish cultural center, as Poles and Jews were the two main ethnicities of the city until the outbreak of World War II and the following...
by 65 delegates from different regions and groups of intellectuals, mostly from the same city. Anatole Vakhnianyn
Anatole Vakhnianyn
Anatole Vakhnianyn , was a Ukrainian political and cultural figure, composer, teacher and journalist.-Biography:Vakhnianyn was born in Sieniawa, Przeworsk County, today a part of Poland but at that time a part of the Austrian Empire. He came from a clerical family; his father, Klym Vakhnianyn, and...
was elected the first head of the Prosvita Society. By the end of 1913, Prosvita had 77 affiliate societies and 2,648 reading rooms.

In 1936 alone, when Western Ukraine with the city of Lviv were part of the Second Polish Republic
Second Polish Republic
The Second Polish Republic, Second Commonwealth of Poland or interwar Poland refers to Poland between the two world wars; a period in Polish history in which Poland was restored as an independent state. Officially known as the Republic of Poland or the Commonwealth of Poland , the Polish state was...
, the Prosvita Society opened over 500 new outlets with full-time professional staff. By the end of the Interwar period
Interwar period
Interwar period can refer to any period between two wars. The Interbellum is understood to be the period between the end of the Great War or First World War and the beginning of the Second World War in Europe....
, Prosvita has grown to include 83 affiliates, 3,210 reading rooms, 1,207 premises, 3,209 libraries (with 688,186 books), 2,185 theater clubs, 1,115 choirs, 138 orchestras, and 550 study groups. On May 22, 1938, a Ukrainian Congress was planned in Lviv to commemorate the 70th anniversary of creation of Prosvita, but it was banned by the Polish authorities.

In 1939 the society was shut down and banned by the newly-arrived
Soviet invasion of Poland (1939)
The 1939 Soviet invasion of Poland was a Soviet military operation that started without a formal declaration of war on 17 September 1939, during the early stages of World War II. Sixteen days after Nazi Germany invaded Poland from the west, the Soviet Union did so from the east...
Soviet rulers. Prosvita operated only in Western Europe and America up to 1988. The first Prosvita society established in the United States was in Shenandoah
Shenandoah, Pennsylvania
Shenandoah is a small town located in the lower part of the anthracite Coal Region, Schuylkill County, Pennsylvania. It is northwest of Philadelphia. The Greater Shenandoah area includes Shenandoah Heights, which is part of West Mahanoy Township and is located just north of Shenandoah.-History:The...
, Pennsylvania
Pennsylvania
The Commonwealth of Pennsylvania is a U.S. state that is located in the Northeastern and Mid-Atlantic regions of the United States. The state borders Delaware and Maryland to the south, West Virginia to the southwest, Ohio to the west, New York and Ontario, Canada, to the north, and New Jersey to...
in 1887.

The Prosvita Society was renewed in Ukraine during the Soviet period of Glasnost
Glasnost
Glasnost was the policy of maximal publicity, openness, and transparency in the activities of all government institutions in the Soviet Union, together with freedom of information, introduced by Mikhail Gorbachev in the second half of the 1980s...
of 1988–89, and since then takes an active part in social life of independent Ukraine. In modern times it was headed by Dmytro Pavlychko
Dmytro Pavlychko
Dmytro Pavlychko - well-known Ukrainian poet, translator, scriptwriter, culturologist, political and public figure, dissident.- Biography :...
and Pavlo Movchan
Pavlo Movchan
Pavlo Movchan - Ukrainian poet and public figure, head of the "Prosvita" Society. Born in 1939 in Kiev Oblast. Pavlo Movchan is a deputy of the Ukrainian Parliament, elected in 2007 on a Our Ukraine–People's Self-Defense Bloc ticket. Movchan became a creating member of Reforms for the Future in...
(at present).

Currently, almost all higher education institutions in Ukraine have Prosvita affiliations with teachers and students as members. Also active are the Young Prosvita youth organizations.

Official goals of the Prosvita Society: