Encyclopedia
A proportional counter is a measurement device to count particle
Charged particle
In physics, a charged particle is a particle with an electric charge. It may be either a subatomic particle or an ion. A collection of charged particles, or even a gas containing a proportion of charged particles, is called a plasma, which is called the fourth state of matter because its...
s of ionizing radiation
Ionizing radiation
Ionizing radiation is radiation composed of particles that individually have sufficient energy to remove an electron from an atom or molecule. This ionization produces free radicals, which are atoms or molecules containing unpaired electrons...
and measure their energy
Energy
In physics, energy is an indirectly observed quantity. It is often understood as the ability a physical system has to do work on other physical systems...
. 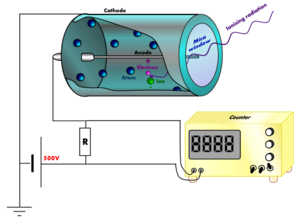 A proportional counter is a type of gaseous ionization detector. Its operation is similar to that of a Geiger-Müller counter
Geiger counter
A Geiger counter, also called a Geiger–Müller counter, is a type of particle detector that measures ionizing radiation. They detect the emission of nuclear radiation: alpha particles, beta particles or gamma rays. A Geiger counter detects radiation by ionization produced in a low-pressure gas in a...
, but uses a lower operating voltage
Voltage
Voltage, otherwise known as electrical potential difference or electric tension is the difference in electric potential between two points — or the difference in electric potential energy per unit charge between two points...
. An inert gas
Inert gas
An inert gas is a non-reactive gas used during chemical synthesis, chemical analysis, or preservation of reactive materials. Inert gases are selected for specific settings for which they are functionally inert since the cost of the gas and the cost of purifying the gas are usually a consideration...
is used to fill the tube, with a quench gas added to ensure each pulse discharge terminates. A common proportional gas mixture is 90% argon, 10% methane, known as P-10. An incoming ionizing particle, if it has sufficient energy, liberates electrons from the atomic orbital
Atomic orbital
An atomic orbital is a mathematical function that describes the wave-like behavior of either one electron or a pair of electrons in an atom. This function can be used to calculate the probability of finding any electron of an atom in any specific region around the atom's nucleus...
s of the gas atoms (see ionization potential
Ionization potential
The ionization energy of a chemical species, i.e. an atom or molecule, is the energy required to remove an electron from the species to a practically infinite distance. Large atoms or molecules have a low ionization energy, while small molecules tend to have higher ionization energies.The property...
), leaving an electron and positively charged atom, commonly known as an ion pair. As the charged particle travels through the chamber it leaves a trail of ion pairs along its trajectory. The electrons created in this process drift toward a readout electrode
Electrode
An electrode is an electrical conductor used to make contact with a nonmetallic part of a circuit...
, known as the anode
Anode
An anode is an electrode through which electric current flows into a polarized electrical device. Mnemonic: ACID ....
, under the influence of an applied electric field
Electric field
In physics, an electric field surrounds electrically charged particles and time-varying magnetic fields. The electric field depicts the force exerted on other electrically charged objects by the electrically charged particle the field is surrounding...
. At the same time, the positive ions drift towards the cathode
Cathode
A cathode is an electrode through which electric current flows out of a polarized electrical device. Mnemonic: CCD .Cathode polarity is not always negative...
, at much lower speed; in practical devices, the drift times are measured in microseconds and milliseconds, respectively.

A proportional counter differs from an ionization chamber
Ionization chamber
The ionization chamber is the simplest of all gas-filled radiation detectors, and is used for the detection or measurement of ionizing radiation...
in that the operating voltage is sufficiently high that the drifting electrons gain enough energy over a mean free path
Mean free path
In physics, the mean free path is the average distance covered by a moving particle between successive impacts which modify its direction or energy or other particle properties.-Derivation:...
to create further ion pairs when they collide with other neutral atoms of the gas. The electrons created in these new events also drift toward the readout electrode and can create further ion pairs themselves. In this manner, a cascade of ion pairs can be created, this is known as a Townsend avalanche. If the operating voltage is chosen carefully, each avalanche process occurs independently of other avalanches which derive from the same initial ionizing event. Therefore, even though the total number of electrons liberated can increase exponentially with distance, the total amount of charge
Electric charge
Electric charge is a physical property of matter that causes it to experience a force when near other electrically charged matter. Electric charge comes in two types, called positive and negative. Two positively charged substances, or objects, experience a mutual repulsive force, as do two...
created remains proportional to the amount of energy liberated in the original event.

By measuring the total charge (time integral
Integral
Integration is an important concept in mathematics and, together with its inverse, differentiation, is one of the two main operations in calculus...
of the electric current
Electric current
Electric current is a flow of electric charge through a medium.This charge is typically carried by moving electrons in a conductor such as wire...
) between the electrodes, we can find out the particle's kinetic energy
Kinetic energy
The kinetic energy of an object is the energy which it possesses due to its motion.It is defined as the work needed to accelerate a body of a given mass from rest to its stated velocity. Having gained this energy during its acceleration, the body maintains this kinetic energy unless its speed changes...
, because the number of ion pairs created by the incident ionizing charged particle is proportional to its energy.

The geometry of the electrodes and the voltages on them are chosen such that in most of the volume of the counter the electric field strength is not enough to produce a Townsend avalanche. The electrons just drift until they get close to the anode, where a strong field allows avalanche multiplication to occur. In this way each electron is multiplied by approximately the same factor (up to about a million) independent of the distance it has covered in the low-field 'drift region'. If the field strength everywhere is below a critical value, Townsend avalanches do not occur at all, and the detector operates as an ionization chamber. If the voltage (and therefore the field strength) is too high, the degree of charge amplification tends to a maximum value, and all pulses from the chamber have the same amplitude, so the detector operates as a Geiger-Müller counter.

This process of charge amplification can improve the signal-to-noise ratio
Signal-to-noise ratio
Signal-to-noise ratio is a measure used in science and engineering that compares the level of a desired signal to the level of background noise. It is defined as the ratio of signal power to the noise power. A ratio higher than 1:1 indicates more signal than noise...
of the detector and also reduce the amount of amplification required from external electronics. The proportionality between the energy of the charged particle travelling through the chamber and the total charge created makes proportional counters useful for charged particle spectroscopy
Spectroscopy
Spectroscopy is the study of the interaction between matter and radiated energy. Historically, spectroscopy originated through the study of visible light dispersed according to its wavelength, e.g., by a prism. Later the concept was expanded greatly to comprise any interaction with radiative...
. The energy resolution of a proportional counter, however, is limited because both the initial ionization event and the subsequent 'multiplication' event are subject to statistical fluctuations.

Proportional counters are also useful for detection of high energy photons, such as X-ray
X-ray
X-radiation is a form of electromagnetic radiation. X-rays have a wavelength in the range of 0.01 to 10 nanometers, corresponding to frequencies in the range 30 petahertz to 30 exahertz and energies in the range 120 eV to 120 keV. They are shorter in wavelength than UV rays and longer than gamma...
s or gamma-rays, provided these can penetrate the entrance window.