Encyclopedia
Project Nekton was the codename for a series of shallow test dives and deep-submergence
Deep Submergence Vehicle
A Deep Sea Submergence Vehicle is a deep diving manned submarine that is self-propelled. The term DSV is generally one used by the United States Navy, though several navies operate vehicles that can be accurately described as DSVs...
operations in the Pacific Ocean
Pacific Ocean
The Pacific Ocean is the largest of the Earth's oceanic divisions. It extends from the Arctic in the north to the Southern Ocean in the south, bounded by Asia and Australia in the west, and the Americas in the east.At 165.2 million square kilometres in area, this largest division of the World...
near Guam
Guam
Guam is an organized, unincorporated territory of the United States located in the western Pacific Ocean. It is one of five U.S. territories with an established civilian government. Guam is listed as one of 16 Non-Self-Governing Territories by the Special Committee on Decolonization of the United...
that saw the United States Navy
United States Navy
The United States Navy is the naval warfare service branch of the United States Armed Forces and one of the seven uniformed services of the United States. The U.S. Navy is the largest in the world; its battle fleet tonnage is greater than that of the next 13 largest navies combined. The U.S...
-owned research bathyscaphe Trieste
Bathyscaphe Trieste
The Trieste is a Swiss-designed, Italian-built deep-diving research bathyscaphe with a crew of two, which reached a record maximum depth of about , in the deepest known part of the Earth's oceans, the Challenger Deep, in the Mariana Trench near Guam, on January 23, 1960, crewed by Jacques Piccard ...
enter the Challenger Deep
Challenger Deep
The Challenger Deep is the deepest known point in the oceans, with a depth of to by direct measurement from submersibles, and slightly more by sonar bathymetry . It is located at the southern end of the Mariana Trench near the Mariana Islands group...
, the deepest surveyed point in the world's oceans.

The series of dives began with a Pacific ocean test dive at Guam, by the newly-modified Trieste, which had been modified to dive far deeper than before. After two checkout dives, the first abyssal dive reached a record of 18,150 ft on November 15, 1959. The series of dives included a record deep dive to near the bottom of the Nero deep in the Mariana Trench
Mariana Trench
The Mariana Trench or Marianas Trench is the deepest part of the world's oceans. It is located in the western Pacific Ocean, to the east of the Mariana Islands. The trench is about long but has a mean width of only...
at 24,000 ft, and finally culminated with a trip to the bottom of the Challenger Deep at 35,797 feet, on January 23, 1960.

The project name was proposed by oceanographer Dr. Robert S. Deitz in early 1958, as plans to modify the Trieste bathyscaphe to go to the deepest part of the oceans were being contemplated. It is in reference to ocean life that actively swims (nekton
Nekton
Nekton refers to the aggregate of actively swimming aquatic organisms in a body of water able to move independently of water currents....
) as opposed to the plankton
Plankton
Plankton are any drifting organisms that inhabit the pelagic zone of oceans, seas, or bodies of fresh water. That is, plankton are defined by their ecological niche rather than phylogenetic or taxonomic classification...
organisms that only drift. The bathyscaphe Trieste to be used for Project Nekton were able to move independently, in contrast to tethered bathyspheres. The Trieste featured two electric motors, each with a propeller, of two horsepower each. These allowed it to move forward, backward and to turn horizontally. A maximum speed of 1 knot was attainable over a few miles distance. 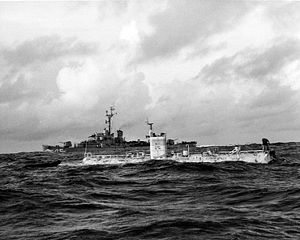 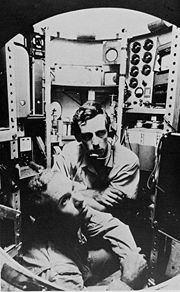 Trieste departed San Diego on October 5, 1959 for Guam
Guam
Guam is an organized, unincorporated territory of the United States located in the western Pacific Ocean. It is one of five U.S. territories with an established civilian government. Guam is listed as one of 16 Non-Self-Governing Territories by the Special Committee on Decolonization of the United...
aboard the freighter SS Santa Mariana to participate in Project Nekton, a series of very deep dives near Guam, culminating in a descent to the Mariana Trench
Mariana Trench
The Mariana Trench or Marianas Trench is the deepest part of the world's oceans. It is located in the western Pacific Ocean, to the east of the Mariana Islands. The trench is about long but has a mean width of only...
. It had been modified with a larger gasoline float, larger ballast tubs, and a newly designed heavy pressure sphere (made by Krupp in Germany), after having been purchased by the Office of Naval Research
Office of Naval Research
The Office of Naval Research , headquartered in Arlington, Virginia , is the office within the United States Department of the Navy that coordinates, executes, and promotes the science and technology programs of the U.S...
, which undertook the modification.

The first two test dives at Guam were conducted in the Apra Harbor, then to 4,900 ft off the Western flank of Guam.

The first deep dive (dive 61 in a long series of bathyscaphe dives supervised by Jacques Piccard) was conducted to 18,600 (later recalibrated to 18,150 feet) depth to the sea floor, on November 15, 1959. On returning from this dive some water leakage was noted along the seals between the three sections of the sphere, but since these were held together with pressure at depth, it was not considered serious after re-epoxying

Dive 62 was another Apra Harbor dive. The next dive (dive 63) was another checkout dive December 18, west of Guam. It reached 5,700 feet.

The next dive (dive 64 in a series) reached 24,000 feet in the Nero Deep in the Marianas Trench 70 miles off Guam. This deep had been discovered in 1899 by the USS Nero in a search for a deep sea cable route to the orient. This dive did not quite reach the bottom, 48 feet below, because too much ballast had been released when the bottom was sounded, and once rising, the bathyscaphe could not be stopped.

On dive 65, on January 23, 1960, Trieste reached the ocean floor in the Challenger Deep (the deepest southern part of the Mariana Trench), carrying Jacques Piccard
Jacques Piccard
Jacques Piccard was a Swiss oceanographer and engineer, known for having developed underwater vehicles for studying ocean currents. He was one of only two people, along with Lt...
(son of the boat's designer Auguste Piccard
Auguste Piccard
Auguste Antoine Piccard was a Swiss physicist, inventor and explorer.-Biography:Piccard and his twin brother Jean Felix were born in Basel, Switzerland...
) and Lieutenant Don Walsh
Don Walsh
Don Walsh is an American oceanographer, explorer and marine policy specialist. He and Jacques Piccard were aboard the bathyscaphe Trieste when it made a record maximum descent into the Mariana Trench on 23 January 1960, the deepest point of the world's ocean...
, USN. This was the first time a vessel, manned or unmanned, had reached the deepest point in the Earth's oceans. The onboard systems indicated a depth of 11521 metres (37,799 ft), although this was later revised to 10916 metres (35,814 ft) and more accurate measurements made in 1995 have found the Challenger Deep to be slightly shallower, at 10911 metres (35,797 ft).

The descent to the ocean floor took 4 hours and 48 minutes at a descent rate of 0.914 m/s
Metre per second
Metre per second is an SI derived unit of both speed and velocity , defined by distance in metres divided by time in seconds....
. After passing 9,000 metres one of the outer Plexiglas window panes cracked, shaking the entire vessel. The two men spent barely twenty minutes at the ocean floor, eating chocolate bars to keep their strength. The temperature in the cabin was a mere 7°C (45°F) at the time. While on the bottom at maximum depth, Piccard and Walsh unexpectedly regained the ability to communicate with the surface ship, USS Wandank II
USS Wandank (ATA-204)
The second USS Wandank , originally USS ATA-204, was a United States Navy auxiliary ocean tug in commission from 1945 to 1947 and again from 1952 to 1971...
, using a sonar
Sonar
Sonar is a technique that uses sound propagation to navigate, communicate with or detect other vessels...
/hydrophone
Hydrophone
A hydrophone is a microphone designed to be used underwater for recording or listening to underwater sound. Most hydrophones are based on a piezoelectric transducer that generates electricity when subjected to a pressure change...
voice communications system. At a speed of almost a mile per second (about five times the speed of sound in air), it took about seven seconds for a voice message to travel from the craft to the surface ship and another seven seconds for answers to return.

While on the bottom, Piccard and Walsh observed a number of small sole
Sole (fish)
Sole is a group of flatfish belonging to several families. Generally speaking, they are members of the family Soleidae, but, outside Europe, the name sole is also applied to various other similar flatfish, especially other members of the sole suborder Soleoidei as well as members of the flounder...
and flounder
Flounder
The flounder is an ocean-dwelling flatfish species that is found in coastal lagoons and estuaries of the Northern Atlantic and Pacific Oceans.-Taxonomy:There are a number of geographical and taxonomical species to which flounder belong.*Western Atlantic...
swimming away, indicating that at least some vertebrate life can withstand the extremes of pressure in any of the Earth's oceans. They noted that the floor of the Challenger Deep consisted of "diatom
Diatom
Diatoms are a major group of algae, and are one of the most common types of phytoplankton. Most diatoms are unicellular, although they can exist as colonies in the shape of filaments or ribbons , fans , zigzags , or stellate colonies . Diatoms are producers within the food chain...
aceous ooze". The ascent to surface took 3 hours, 15 minutes.

Since then, no manned craft has ever returned to the Challenger Deep. A Japanese robotic craft Kaiko
Kaiko
was a remotely operated underwater vehicle built by the Japan Agency for Marine-Earth Science and Technology for exploration of the deep sea. Kaikō was the second of only three vessels ever to reach the bottom of the Challenger Deep, as of 2010...
reached the bottom of the Challenger Deep in 1995. The Nereus
Nereus (underwater vehicle)
Nereus is a hybrid autonomous underwater vehicle built by the Woods Hole Oceanographic Institution . Constructed as a research vehicle to operate at depths of up to , it was designed to explore Challenger Deep, the deepest surveyed point in the global ocean...
hybrid remotely operated vehicle (HROV) reached the bottom on May 31, 2009.
The source of this article is wikipedia, the free encyclopedia.  The text of this article is licensed under the GFDL.