Encyclopedia
The Progressive Party of 1924 was a new party created as a vehicle for Robert M. La Follette, Sr.
Robert M. La Follette, Sr.
Robert Marion "Fighting Bob" La Follette, Sr. , was an American Republican politician. He served as a member of the U.S. House of Representatives, was the Governor of Wisconsin, and was also a U.S. Senator from Wisconsin...
to run for president in the 1924 election
United States presidential election, 1924
The United States presidential election of 1924 was won by incumbent President Calvin Coolidge, the Republican candidate.Coolidge was vice-president under Warren G. Harding and became president in 1923 when Harding died in office. Coolidge was given credit for a booming economy at home and no...
. It did not run candidates for other offices, and it disappeared after the election except in Wisconsin. Its name resembles the 1912 Progressive Party
Progressive Party (United States, 1912)
The Progressive Party of 1912 was an American political party. It was formed after a split in the Republican Party between President William Howard Taft and former President Theodore Roosevelt....
, which LaFollette opposed and which was defunct by 1919. The 1924 party was composed of La Follette supporters, who were distinguished from the earlier Roosevelt supporters by being generally more agrarian, populist, and midwestern in perspective, as opposed to urban, elitist, and eastern. The 1924 party carried only Wisconsin
Wisconsin
Wisconsin is a U.S. state located in the north-central United States and is part of the Midwest. It is bordered by Minnesota to the west, Iowa to the southwest, Illinois to the south, Lake Michigan to the east, Michigan to the northeast, and Lake Superior to the north. Wisconsin's capital is...
, but carried many counties in the Midwest and West with large German American
German American
German Americans are citizens of the United States of German ancestry and comprise about 51 million people, or 17% of the U.S. population, the country's largest self-reported ancestral group...
elements or strong labor union movements. 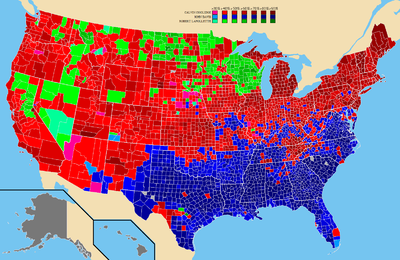 In 1924 his new party (using the old 1912 name) called for public ownership of railroads, which catered to the Railroad brotherhoods
Railroad brotherhoods
The Railroad brotherhoods are labor unions of railroad workers in the United States. They first appeared in 1863 and they are still active. Until recent years they were independent of each other and of the American Federation of Labor.-1863-1920:...
. La Follette ran with Senator Burton K. Wheeler
Burton K. Wheeler
Burton Kendall Wheeler was an American politician of the Democratic Party and a United States Senator from 1923 until 1947.-Early life:...
, Democratic Senator from Montana
History of Montana
-Indigenous peoples :Archeological evidence has shown indigenous peoples lived in the area for thousands of years. For example, rock art in Pictograph Cave six miles south of Billings has been dated, showing human presence in the area more than 2,100 years ago. Most indigenous people of the...
. The party represented a farmer/labor coalition and was endorsed by the Socialist Party of America
Socialist Party of America
The Socialist Party of America was a multi-tendency democratic-socialist political party in the United States, formed in 1901 by a merger between the three-year-old Social Democratic Party of America and disaffected elements of the Socialist Labor Party which had split from the main organization...
, the American Federation of Labor
American Federation of Labor
The American Federation of Labor was one of the first federations of labor unions in the United States. It was founded in 1886 by an alliance of craft unions disaffected from the Knights of Labor, a national labor association. Samuel Gompers was elected president of the Federation at its...
and many railroad brotherhoods. The party did not run candidate for other offices, and only carried one state, Wisconsin. La Follette continued to serve in the Senate as a Republican until his death the following year, and was succeeded in a special election in 1925 by his son, Robert M. La Follette, Jr.
Robert M. La Follette, Jr.
Robert Marion "Young Bob" La Follette, Jr. was an American senator from Wisconsin from 1925 to 1947, the son of Robert M. La Follette, Sr., the brother of Philip La Follette, and Fola La Follette, whose husband was the playwright George Middleton.- Early life:La Follette was born in Madison,...

Hiram W. Johnson, the Progressive Party vice presidential nominee in 1912, was reelected as Governor of California on the Progressive ticket in 1914. In 1916, he was elected as a Progressive to the U.S. Senate and continued his affiliation with the state party throughout his decades in the Senate, while simultaneously winning the Republican nomination. While Johnson was personally close to Theodore Roosevelt, he was much closer ideologically to Robert La Follette. Johnson sat out the general election in 1924 after unsuccessfully challenging President Coolidge for the Republican nomination. Johnson personally disliked La Follette but grudgingly admired his quixotic third-party bid and generally agreed with his 1924 platform.

In 1934, when the La Follettes founded the Wisconsin Progressive Party, the California Progressive Party obtained a ballot line in California and ran seven candidates (all unsuccessful, although Raymond L. Haight
Raymond L. Haight
Raymond LeRoy Haight was an American lawyer and politician from California. Involved in the Republican and Commonwealth-Progressive parties, Haight ran as a third party candidate during the 1934 California gubernatorial election.-Biography:Haight was born in San Jose, California to George Haight...
got 13% of the vote for Governor of California
Governor of California
The Governor of California is the chief executive of the California state government, whose responsibilities include making annual State of the State addresses to the California State Legislature, submitting the budget, and ensuring that state laws are enforced...
, running as a moderate against socialist and Democratic nominee Upton Sinclair
Upton Sinclair
Upton Beall Sinclair Jr. , was an American author who wrote close to one hundred books in many genres. He achieved popularity in the first half of the twentieth century, acquiring particular fame for his classic muckraking novel, The Jungle . It exposed conditions in the U.S...
). In 1936 they elected Franck R. Havenner
Franck R. Havenner
Franck Roberts Havenner was a six term United States Representative from California's 4th congressional district beginning in 1936. He is a graduate from Columbian College...
as Congressman
United States House of Representatives
The United States House of Representatives is one of the two Houses of the United States Congress, the bicameral legislature which also includes the Senate.The composition and powers of the House are established in Article One of the Constitution...
for California's 4th congressional district
California's 4th congressional district
California's 4th congressional district is a congressional district located in the U.S. state of California. It covers the northeastern corner of California along Route 395, encompassing El Dorado, Placer, Nevada, Sierra, Plumas, Lassen, and Modoc counties, as well as parts of Butte County...
, and garnered a significant portion of the votes in some other races.

Havenner became a Democrat before the 1938 race; Haight defeated eventual winner Culbert Olson
Culbert Olson
Culbert Levy Olson was an American lawyer and politician. A Democrat, Olson was involved in Utah and California politics and was elected as the 29th Governor of California from 1939 to 1943.-Personal background:...
in the Progressive primary election, but received only 2.43% of the vote in the general election as a Progressive; and by the time of the 1942 gubernatorial election, the Progressives were no longer on the California ballot. By 1944, Haight was again a Republican, a delegate to the Republican National Convention
1944 Republican National Convention
The 1944 Republican National Convention was held in Chicago, Illinois, from June 26 to 28, 1944. It nominated Governor Thomas E. Dewey of New York for President and Governor John Bricker of Ohio for Vice-President....
.