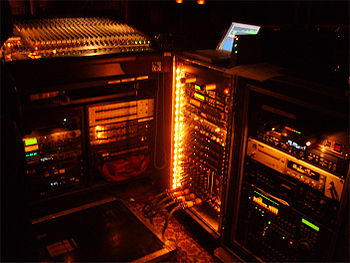 Professional audio, also 'pro audio', refers to both an activity and a type of audio equipment. Typically it encompasses the production or reproduction of sound for an audience
Audience
An audience is a group of people who participate in a show or encounter a work of art, literature , theatre, music or academics in any medium...
, by individuals who do such work as an occupation like live event support, using sound reinforcement system
Sound reinforcement system
A sound reinforcement system is the combination of microphones, signal processors, amplifiers, and loudspeakers that makes live or pre-recorded sounds louder and may also distribute those sounds to a larger or more distant audience...
s designed for the purpose. (By contrast, consumer audio is usually confined to the reproduction of sound in the home.) Professional audio can include but is not limited to broadcast radio, audio mastering
Audio mastering
Mastering, a form of audio post-production, is the process of preparing and transferring recorded audio from a source containing the final mix to a data storage device ; the source from which all copies will be produced...
in a recording studio
Recording studio
A recording studio is a facility for sound recording and mixing. Ideally both the recording and monitoring spaces are specially designed by an acoustician to achieve optimum acoustic properties...
, television studio
Television studio
A television studio is an installation in which a video productions take place, either for the recording of live television to video tape, or for the acquisition of raw footage for post-production. The design of a studio is similar to, and derived from, movie studios, with a few amendments for the...
, sound reinforcement such as a concert, DJ performances, Audio sampling
Sampling (music)
In music, sampling is the act of taking a portion, or sample, of one sound recording and reusing it as an instrument or a different sound recording of a song or piece. Sampling was originally developed by experimental musicians working with musique concrète and electroacoustic music, who physically...
, public address
Public address
A public address system is an electronic amplification system with a mixer, amplifier and loudspeakers, used to reinforce a sound source, e.g., a person giving a speech, a DJ playing prerecorded music, and distributing the sound throughout a venue or building.Simple PA systems are often used in...
, surround sound movie theatres, and in some cases piped music application.

The term 'professional audio' has no precise definition, but its typical features may include:

The broadcast quality
Broadcast quality
Broadcast Quality is an term stemming from quad videotape to denote the quality achieved by professional video cameras and time base correctors used for broadcast television, usually in standard definition...
of professional audio equipment is on a par with that of consumer high-end audio
High-end audio
High-end audio is a term used to describe a class of consumer home audio equipment marketed to audio enthusiasts on the basis of high price or quality, and esoteric or novel sound reproduction technologies. High-end audio can refer simply to the price, to the build quality of the components, or to...
equipment, but is more likely to be designed purely on sound engineering principles and owe little to a consumer oriented audiophile
Audiophile
An audiophile is a person who enjoys listening to recorded music, usually in a home. Some audiophiles are more interested in collecting and listening to music, while others are more interested in collecting and listening to audio components, whose "sound quality" they consider as important as the...
sub-culture.